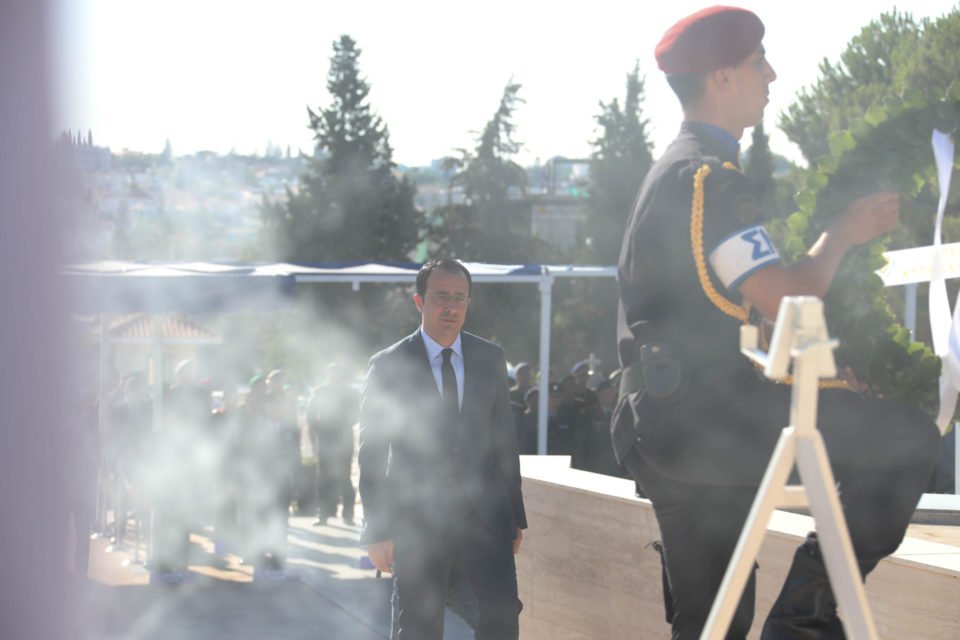 Cyprus on Saturday marked the 45th anniversary of the Turkish invasion on July 20, 1974 with sombre memorials and the eerie sound of war sirens as Turkey made fresh threats saying its armies would not hesitate to do the same as in the past.

“What is always our priority is to never allow this country to live through war again,” President Nicos Anastasiades said in a message on social media. “We need to reunite our country and create the conditions for peace, security, and welfare for all our people.”

He added that the memory of the fallen and missing, and the pain of the wounded were not honoured only by memorial services and prayers, but with action.

At the same time, Turkish President Tayyip Erdogan said Ankara would not hesitate to take the same actions as in 1974 if the Turkish Cypriots were threatened.

He said Turkey conducted the ‘peace operation’ in order to protect the rights and interests of the Turkish Cypriot people, “one of the equal and joint owners of the island of Cyprus”.

“No one should doubt that the glorious Turkish military, which does not consider Cyprus any different from its own homeland, will not hesitate, if needed, to once again take the step it took 45 years ago when it comes to the Turkish Cypriots’ lives and safety,” Erdogan warned.

Addressing Turkish Cypriot leader Mustafa Akinci, Erdogan said: “Turkish Cypriots are an integral part of the Great Turkish Nation. Those, who dream of changing that fact, will sooner or later realise that their efforts are in vain.”

Commenting on the Cyprus problem, he said a solution would have to guarantee the political equality of the Turkish Cypriots and address their security concerns.

“This aim, required by the realities on the island, will under no circumstances be given up on. In any case, Turkey will continue to guarantee the Turkish Cypriots’ welfare, safety and future.”

Celebrations were also held in the north to mark the invasion, with Turkish fighter jets flying over Nicosia and parades.

In turn, political parties in the government-controlled areas condemned Erdogan’s provocative statements on the anniversary of the invasion, saying they were aimed to ratcheting-up tensions.

Representing Anastasiades at a memorial service in Phaneromeni in Nicosia, Foreign Minister Nicos Christodoulides said that the Greek Cypriot side wanted to resume talks from where they left off in Crans-Montana two years ago.

“Our sincere will is for the termination of the current unacceptable destabilising conditions and threats and the return to the negotiating table from where they left off in Crans-Montana,” he said.

Christodoulides added that in Cyprus there was no room for guarantees and foreign armies and that there was solely a place for the implementation of human rights, international law, and the principles of the EU for all its citizens.

The foreign minister added: “Despite Ankara’s continued provocations, the Greek Cypriot side with devotion and determination and utilising every means at its disposal exert sincere and intensive efforts for the resolution of the Cyprus problem aiming at a viable and functional solution.”

During his speech, Christodoulides said that there was no better way to honour the fallen and injured of the invasion than by reuniting Cyprus.

Earlier, Christodoulides and Greek Defence Minister Nicos Panagiotopoulos attended a memorial service for the fallen at the cemetery in Tymvos Makedonitissa outside Nicosia.

In a message to Cyprus on the invasion anniversary, Greek Foreign Minister Nikos Dendias said Greece “does not accept and will never accept the consequences of the Turkish invasion.”

Terminating the occupation and its consequences and finding a mutually acceptable, comprehensive, just, viable and functional solution of the Cyprus problem, in the framework of UN Security Council resolutions and the European acquis is a top priority of Greece’s foreign policy, Dendias said.

“The abolition of the anachronistic system of guarantees and the withdrawal of the occupying forces are an integral part of a solution of the Cyprus problem”, he added.

The Greek foreign minister added that provocations continued with Turkey’s illegal activities in Cyprus’ territorial waters and exclusive economic zone and stressed that these activities constitute a blatant violation of international law and the law of the sea and directly contradict the European acquis and European policies in the crucial energy sector for maximum EU energy self-sufficiency and increase of energy sources and routes.

“Greece has been and will always be on the side of the Republic of Cyprus with a view to reunifying and restoring the rights and fundamental freedoms of the Cypriot people as a whole, without departing from international and European principles and values, with full sovereignty, full independence and territorial integrity”, Dendias said.

Air-raid sirens marking Turkey’s invasion blared at 5:30am on Saturday to mark the invasion that displaced 200,000 people from their homes, left thousands of dead, and hundreds missing.

Flowers were laid, prayers were read, and incense was used to honour the memories of the fallen soldiers buried at the Tymvos cemetery, where an emotional service was held on Saturday morning.