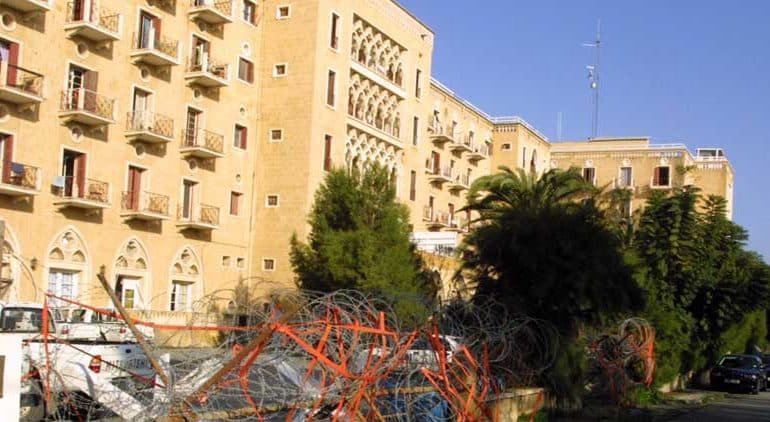 EVERY now and again a news item surface about the Church being in talks with an investor, nearly always American, who is interested in refurbishing and reviving the UN-controlled Ledra Palace Hotel inside Nicosia’s Green Line.

Again this week, Archbishop Chrysostomos told a newspaper he was in talks with an American investor about the Ledra Palace, and again, the reports were quashed. “It isn’t going to happen,” a UN source told the Sunday Mail.

According to Kathimerini, an American investor approached the Archbishop with a proposal on the restoration and operation of the hotel, once the jewel of the capital. The Church of Cyprus is the major shareholder in the hotel.

The offer comes after the British contingent of Unficyp, which was stationed at the hotel for some 45 years, recently moved out after it became uninhabitable over time without adequate repair.

Chrysostomos told Kathinerini that the investor was willing to fork out a big chunk of money for the restoration of the hotel but that consultations were still at the initial stages since the government and the UN need to give the green light.

He said that he told the investor that they would have to pay the entire restoration costs because the Church is unable to.  “I told him: You will restore it, you will operate it the first years and gradually you will start paying rent,” the Archbishop told the paper.

The Church primate said that if the building was left unattended it would need to be demolished in a few years.

“Balconies have already started to fall, the plumbing and electrical installations need to be changed,” he said.

He added the hotel has been greatly damaged and more money would be required for its restoration than to build it from scratch.

The Archbishop said he asked the investor if he also discussed the matter with the Foreign Office since the British Unficyp contingent was involved.

“The British are difficult and I personally don’t trust them because what happened to us was due to the British,” he was quoted by the paper as saying.  He said however that something must be done.

“I am sure the British will not give the Turks the opportunity to march a few metres and take over the hotel,” he said.

He said the final decision would be made following contacts through the foreign ministry.

However, one political observer said it was unlikely the hotel would ever be handed back until after a Cyprus solution.

On why the Archbishop kept pushing the issue and talking about something that was clearly not on the cards, the observer said: “The reason is probably twofold. It would obviously be a good business development for the Church and also it could be his way of putting pressure because he is not wrong when it comes to the state of the building. If the British soldiers had to leave for safety reasons, then things can only get worse as long as the hotel sits there without any repairs. It’s a real shame but the reality is, like so many other things, that the Ledra Palace is another victim of the political situation here, and another symbol of division.”

Earlier in the year, the British contingent moved into prefabricated buildings on the grounds of the hotel because the 70-year-old hotel, fell into such disrepair, it had over the years become a safety concern but the UN did not have the budget needed to fix it.

The contingent first took up residence at the hotel in the aftermath of the Turkish invasion in 1974.

The hotel remains under UN control and its entire ground floor is still being used for bicommunal events, meetings and gatherings.

The Ledra Place was designed by the German-Jewish architect Benjamin Günsberg and was built between 1947 to 1949 on what was then called King Edward VII Street, since 1960 known as Markos Drakos Avenue.

It originally had 94 bedrooms and 150 beds, officially rated as deluxe. Up until 1974, it was one of the largest and most glamorous hotels of the capital but fell within the boundaries of the UN buffer zone after the invasion.

Sources had told the Cyprus Mail last March that the hotel would not be turned into a museum following speculations on future plans once the British contingent moved out.

The same sources had said at the time there was no question of the church getting the hotel back due to the fact the current political climate would not be conducive to such a move.

The Turkish Cypriot side had jumped in with objections to pre-empt any return of the hotel to the Greek Cypriot side. The Church also had meetings in 2014 with US investors interested in investing in the Ledra Palace but that also came to nothing due to the political situation.

Asked to comment on the latest attempt to secure an investor, Unficyp spokesman Aleem Siddique told the Sunday Mail he could not comment on speculative reports.

The real reason Turkey is in Cyprus’ EEZ

How to handle Turkey’s invasion of Cyprus’s EEZ