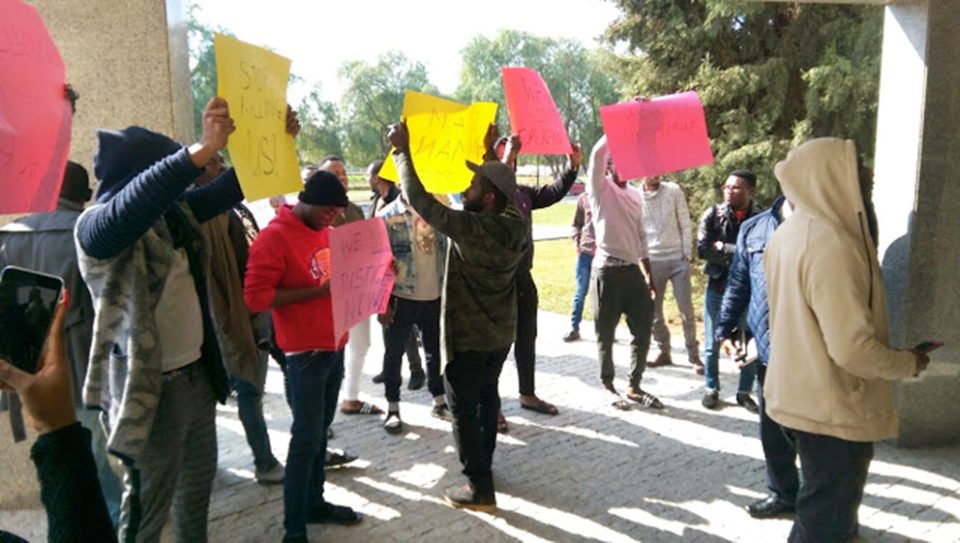 The body of a 33-year-old Nigerian student, who had been missing since July 1, was found in the boot of a car in central Nicosia last week. He had been beaten and stabbed to death, bound, wrapped in a blanket and left to rot.

Obasanje Adeola Owoyalr was not the first African student brutally murdered in the northern part of Cyprus recently. In April 2019, another Nigerian, 25-year-old Walshak Augustine Ngok, was beaten to death and dumped in a field off a highway near Nicosia. In January 2018, the 28-year-old Nigerian Kennedy Taomwabwa Dede was kidnapped and beaten to death near a lake in Famagusta.

A non-negligible number of other African students on this “education island” – as the northern part of Cyprus is advertised in African and Central Asian countries – have died in recent years falling off balconies and roofs under suspicious conditions, or have been found dead in their rooms. Commentators point to a wide array of problems arising from the higher education policy of the northern part of Cyprus, which could be summarised as ‘opening as many universities as possible and attracting as many students as possible.’

The higher education sector, which is one of the engines of the Turkish Cypriot economy, has grown in an uncontrolled fashion in the last decade as one university after another opened its doors to a flood of overseas students. There currently are some 103,000 students in a total of 20 universities. The lucrativeness of the business, coupled with the ease with which student visas are issued, and lack of controls or supervision over whether individuals entering the northern part of Cyprus on a student visa are indeed going to school, boosted the foreign student numbers. The number of foreign students increased sevenfold from around 5,000 in 2010 to over 35,000 last year. Some 20,000 of those foreign students are from African countries, mostly Nigeria.

A report titled “Problems faced by foreign students in Cyprus” by the Eastern Mediterranean University Academic Staff Union DAU-SEN published earlier this year points to the lack of necessary infrastructure and conditions to ensure the welfare of these foreign students, and the existence of malicious agents or middlemen, who exploit them. In many cases, they are falsely promised low tuition fees, accommodation and access to good jobs by agents working for the universities in the northern part of Cyprus, but end up being exploited as cheap labour under slavery conditions, forced into prostitution or drug trafficking, according to the report.

“It has been determined that agents give incorrect information to African students, telling them that north Cyprus is a visa-free European country,” the report says. “The students are faced with the increasing costs of the school and the agents. They find out that promises of scholarships and accommodation are empty words. They realise that the budget they have will be insufficient and start struggling to survive.”

“The flow, which began with good students from Africa, has in time turned into soft human trafficking,” said Senior Researcher Mete Hatay of PRIO Cyprus Centre. “Hundreds of unemployed Africans are accepting agents’ offers and coming to Cyprus to find a job and build a better future.”

In fact, the plight of African students in the northern part of Cyprus was the inspiration for Booker prize nominee author Chigozie Obioma’s second book An Orchestra of Minorities. Nigerian Obioma was himself a student here from 2007 to 2012, during which time he witnessed the death of a fellow Nigerian student, who had been duped into coming to Cyprus and ended up dying after – according to police – accidentally falling off a roof.

In an article he penned for the Guardian in 2016, Obioma explains: “None of the students… knew that northern Cyprus was… not Europe; it was not America; it was not Asia; it was not even Turkey… Its streets were ramshackle, its infrastructure second rate. There were no jobs. There were no amenities, no opportunities… They came bursting with hope and expectations to a desert of stark, paralysing disappointment.”

Director Mine Yucel of The Center for Migration, Identity and Rights Studies, highlights that student visas, in some cases are also being used as a way to legitimise illegal dealings. The DAU-SEN report seconds Yucel’s findings. “Among those Africans, who arrive in Cyprus on a student visa, are some, who are from the world of crime and who, after registering in a university for just one semester, engage in all kinds of illegal activities such as drug trafficking, prostitution and money laundering. Many students have stated that some act as agents and force vulnerable students into prostitution, threaten and intimidate them and even apply physical violence. Economic hardships push students to drugs both as users and sellers.”

In fact, a paragraph in the US State Department’s 2018 Trafficking in Persons Report refers to the higher education sector in the northern part of Cyprus: “Men and women enrolled as university students, particularly from Sub-Saharan African countries, are vulnerable to sex trafficking and forced labour. As in previous years, observers reported a number of women entered the ‘TRNC’ on three-month tourist or student visas and engaged in prostitution… some may be trafficking victims.”

It is unfortunately not surprising that in a place where vulnerabilities are exploited by malicious or criminal circles so many students are forced into illegal activities, and necessary control and protection mechanisms are not in place, many African students are being murdered or losing their lives under questionable circumstances, according to the commentators.

“We have turned into a sick community that exploits or allows the exploitation of foreign students,” said Yucel. “Is there anyone here, who can still take pride in being an ‘education island?’”

We may all die in a divided Cyprus