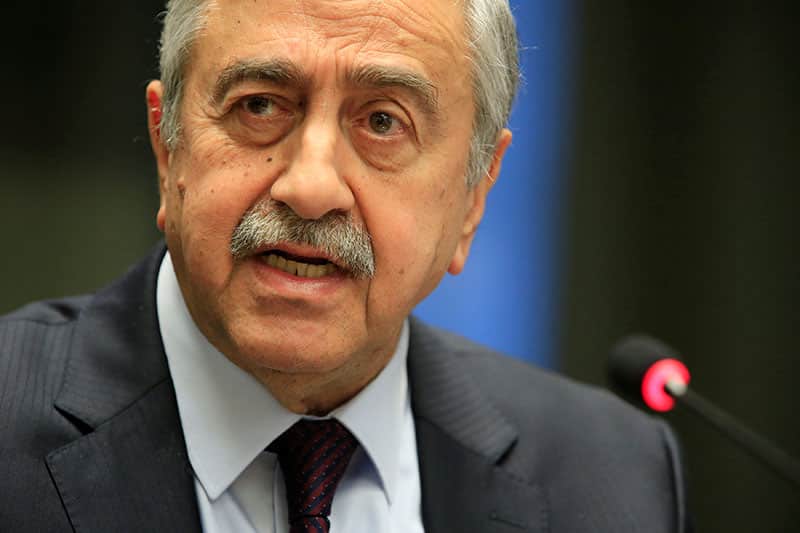 THE two leaders will meet on August 9 at the office of the office of the UN Secretary-General’s Special Representative Elizabeth Spehar, Government Spokesman Prodromos Prodromou announced on Monday amid the exchange of barbs between Cyprus and Turkey over talk of a two-state solution, and hydrocarbons.

At the same time. President Nicos Anastasiades’ response to the proposal by Turkish Cypriot leader Mustafa Akinci to form a joint committee on hydrocarbons was also delivered on Monday.

According to a written statement from Prodromou, a meeting has been arranged for the two leaders for August 9 at 10.30am at Spehar’s office. This will be their first meeting since last February.

Prodromou said on Sunday that the president’s wish was “to discuss freely and go over all the subjects in order to reach a resumption of the talks.”

“We hope that the meeting will revolve around the real issues of the Cyprus problem without any effort to include other issues that might be a factor of obstruction or distraction,” he said.

He reiterated that the talks could not restart as long as the other side continued to provoke, to violate rights and to cause tensions.

The spokesman said that it was not clear yet whether UN Secretary General’s Special Envoy Jane Holl Lute would be present at the meeting of the two leaders.

Anastasiades said on Monday night he hoped the Turkish Cypriot side would realise that Turkey’s “provocative actions” in violating Cyprus’ EEZ “is not in line with the resumption of talks and the process of resolving the Cyprus problem, which is what our side seeks.”

“It should therefore be understood that as long as Turkey insists on violating international law and European Union recommendations, a new talks’ process could not begin.

“Therefore, what is needed is Turkey to move away from any intransigence and provocation, respecting the sensitivities of the Greek Cypriots and the sovereign rights of the Cyprus Republic,   to show in practice the will it allegedly has to resolve the Cyprus issue, so that we, in the context of a possible new process can achieve substantial progress,” he said.

The meeting with Akinci was arranged after Anastasiades expressed his readiness last Thursday to meet the Turkish Cypriot leader, welcoming the latter’s proposal for a five-party informal conference on Cyprus to see if all sides agreed on the type of solution being sought. If the two leaders agree on key issues, the conference will reportedly take place in September in New York since all stakeholders will be there to attend the UN General Assembly.

Turkish Foreign Minister Mevlut Cavusoglu told Turkish channel TGRT on Monday that the aim of the unofficial conference was for each party to discuss the way forward but not from where things left off in Crans-Montana in 2017, arguing that talks for a federal solution have failed and there was need for alternative solutions.

Cavusoglu said Turkey was ready for cooperation to reach a solution to the dispute over energy resources in the region.

Turkish Cypriot ‘foreign minister’ Kudret Ozersay said the Turkish Cypriot side needed to be very careful regarding a possible five-party meeting and that the ‘government’ did not support the idea of resuming negotiations on the same basis as the previous round.

But according to Prodromou, the Greek Cypriot side’s intention is to begin the talks from the point they left off to utilise the progress that was made, rather than beginning from scratch, but also to avoid any attempts to divert the procedure from the UN framework.

In the meantime, Anastasiades’ response to Akinci was submitted on Monday to the UN Secretary-General Antoniou Guterres, President of the European Commission Jean-Claude Juncker and EU High Representative for Foreign Affairs and Security Policy Federica Mogherini.

“The letter has also been notified to Turkish Cypriot leader Mr Mustafa Akinci,” Prodromou said in a written statement.

The response to Akinci came after the party leaders last week unanimously rejected the Turkish Cypriot leader’s proposal to establish a joint committee on hydrocarbons, arguing that it distracted from the essence of the Cyprus problem and the need for immediate resumption of substantive negotiations with a view to reaching a solution on the basis of United Nations resolutions, and the principles and values of the EU.

Political parties also said in a joint statement that Akinci’s proposal contained provisions that did not serve the best interests of the Republic of Cyprus and the Cypriot people as a whole.

Anastasiades had asked parties to submit their suggestions on what he should include in his response, with main opposition Akel arguing that he ought to respond with a counterproposal and not just an outright rejection.

On Saturday, Akel made public the letter it sent Anastasiades with its suggestions. In its letter, the party called on Anastasiades to declare that the involvement of the Turkish Cypriots in natural gas issues could be discussed if there was a strategic agreement to lead to a solution.

The party also called for a commitment that after the solution, a federal Cyprus would start talks with Turkey on delimitation of their EEZs based on the UN Law of the Sea. Another proposal also concerned talks on the transfer of natural gas through a pipeline to Turkey for its own needs or for the sale to others by Cyprus. Akel also proposed the creation of a joint hydrocarbons fund.

International conference on peace education gets underway in Nicosia