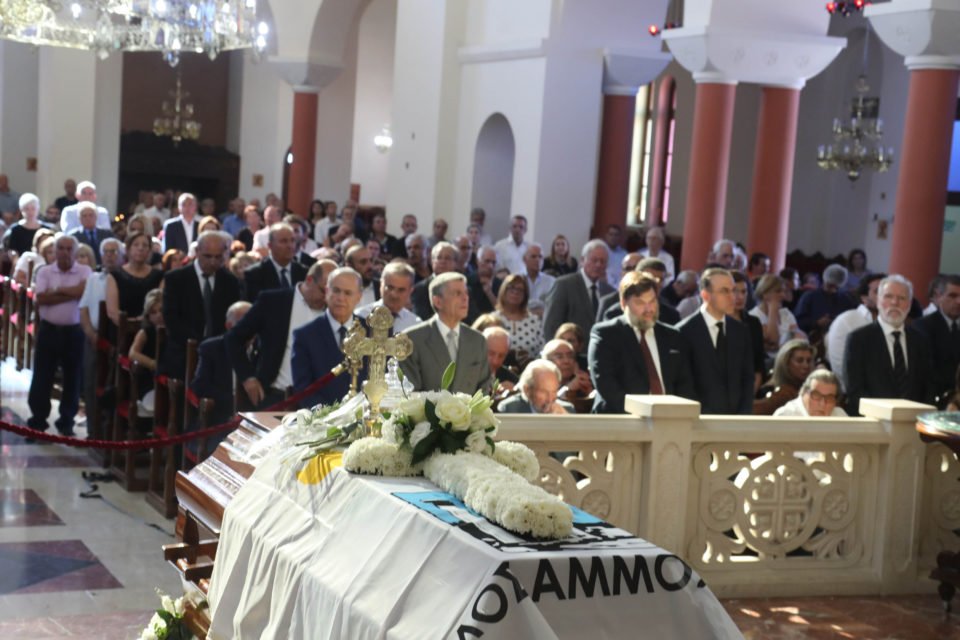 The funeral of Alexis Galanos in Nicosia (PIO)

FAMAGUSTA mayor Alexis Galanos was buried at the Engomi cemetery on Monday after a funeral service at the Church of the Wisdom of God in Strovolos.

Galanos died of a heart attack last Monday at the age of 78 while on holiday on the Greek island of Kos. The body was transferred to Cyprus on Wednesday.

The family of Galanos received condolences at the church between 3.30pm and 5pm, when a large crowd gathered for the funeral service to bid a final farewell to the deceased Famagusta mayor.

Among the attendees of the ceremony were the House President Demetris Syllouris, Justice Minister Giorgos Savvides on behalf of president Nicos Anastasiades, Transport Minister Vasiliki Anastassiadou, party leaders and other top officials, including Attorney-General Costas Clerides.

Eulogies focusing on Galanos’ efforts for the benefit of Cyprus and Famagusta were given by former Foreign Minister Ioannis Kasoulides, the Famagusta Deputy Mayor Chrysanthos Zannettos, and the son of Galanos, Christos Galanos.

“We bid farewell to the noble democrat, Alexis Galanos,” Kasoulides said. “You can rest in peace, as we will continue your struggle for Famagusta and Cyprus,” Zannettos said.

A Cyprus flag and the flag of the Famagusta municipality were placed on the deceased mayor’s coffin, on top of which lay a jar containing sand from a beach in Famagusta.

Galanos’ asked that donations in his memory be given to a number of charities.

The funeral costs for Galanos, a long-time MP, the 7th president of the House of Representatives, and since 2006 the mayor of Famagusta, was paid by the Famagusta municipality.