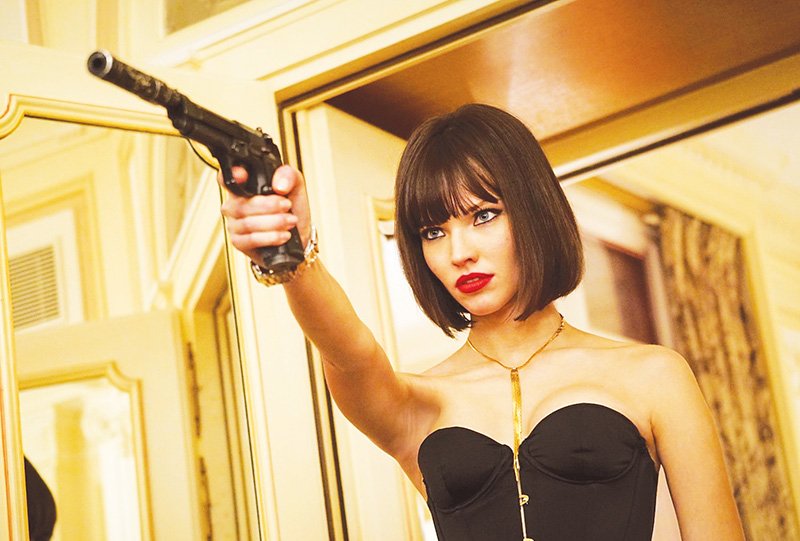 Helen Mirren has a ball in Anna, decked out in granny glasses and deeply unflattering brown wig as a KGB higher-up named Olga. Olga is a spiky mentor figure (actually she’s more of a cold bitch), and comes with all the bits of business an ageing thespian needs to make her happy. She chain-smokes. She has a limp. She snaps out instructions to minions – “You! Stay here!” – and specialises in side-of-the-mouth grumpiness. We’re in the Soviet Union, so of course everyone plays chess. Anna – the new addition to the KGB – plays chess really well, say her handlers proudly, but Olga’s unimpressed: “Like I give a shit if she plays chess! If she can fix my heater, that would be something!”.

Anna’s the kind of film where you go by the scenic route. The journey itself is familiar – a blend of Cold War spies and sub-John Wick action – so you look for fun diversions along the way, like for instance an Oscar-winning actress in KGB-spinster mode. Writer-director Luc Besson has been churning them out since the 80s, though it should be noted that he’s currently struggling. His previous film, Valerian and the City of a Thousand Planets, was an expensive flop. News arrived last week that his Paris-based studio EuropaCorp has been taken over by a New York investment fund. He himself recently faced allegations of sexual harassment – though in fact his films (Lucy, La Femme Nikita, etc) often feature strong action heroines, as indeed does this one. The point is that Anna is the film of a rather beleaguered filmmaker, falling back on the tried and tested and providing mostly incidental pleasures like (yes) Helen Mirren.

Period detail is hilariously shoddy here: the action takes place in the late 80s and early 90s, but technology ranges from the kind of bulky mobiles that didn’t appear till years later to actual laptops and USBs. (Floppy disc, we hardly knew ye.) There’s an absent-minded air to the whole enterprise; after Valerian – a labour of love, and the most expensive film ever made in France – Besson doesn’t seem too invested in this more modest project. Even the female empowerment seems a bit tacked-on, mostly in a scene where Anna – working as a fashion model while planning her latest KGB hit – beats up an annoying photographer and makes him bark like a dog. Oh, and she’s also bisexual? Something like that. The girlfriend dalliance feels a bit tacked-on too.

The film isn’t much, to be sure. Then again, there’s a reason why Besson has survived for so long, beating Hollywood at its own game: he has brash, silly energy, and a knack for the jokes that work best in this genre. “I want you to deliver a message to your people,” an American prisoner is instructed by a dour KGB chief; cut to prisoner nodding uncertainly – then cut to puzzled CIA man Cillian Murphy, examining a bulky package which we know will contain the grisly ‘message’ (it does). Anna’s arrival at the modelling agency is a rather adorable tour through a crowded flat that seems to house any number of perky young girls. A montage intercutting her modelling and murdering – from shooting photos to shooting enemies of the state, all to the strains of ‘Need You Tonight’ – is juvenile fun, like Besson’s sensibility in general.

Anna’s a palindromic name, it reads forwards and backwards – and Anna, too, goes in both directions, not just gay/straight but KGB/CIA; anything to gain her freedom, a woman’s most cherished dream in the film’s harsh world. She’s a Russian doll, “a woman inside of a woman” – and Russian newcomer Sasha Luss gives a pretty good account of herself, looking somewhat like a stretched-out Rachel McAdams (not just taller; the features are a bit tighter too, and more severe) with some of that actress’s charm.

Besson doesn’t wholly phone it in; there’s some games with chronology, the film jumping back and forth in time to repeat the same scenes with new information – and the action isn’t bad either, Anna taking out a whole restaurant full of bodyguards, improvising weapons out of smashed plates and bits of bar-rail. Anna has to be approached in the right spirit, viz. as a retread and a trifle – and indeed a comedy, in the sense of being amused by individual ‘jokes’ without necessarily demanding any larger vision. It’s a bit stale, for sure – but then Helen Mirren gets irrationally furious about the angle on a surveillance camera (Don’t we have a better angle? she yells at the minions; “Might as well use a f**kin’ telescope!”) and all is forgiven. Like I said, the scenic route.