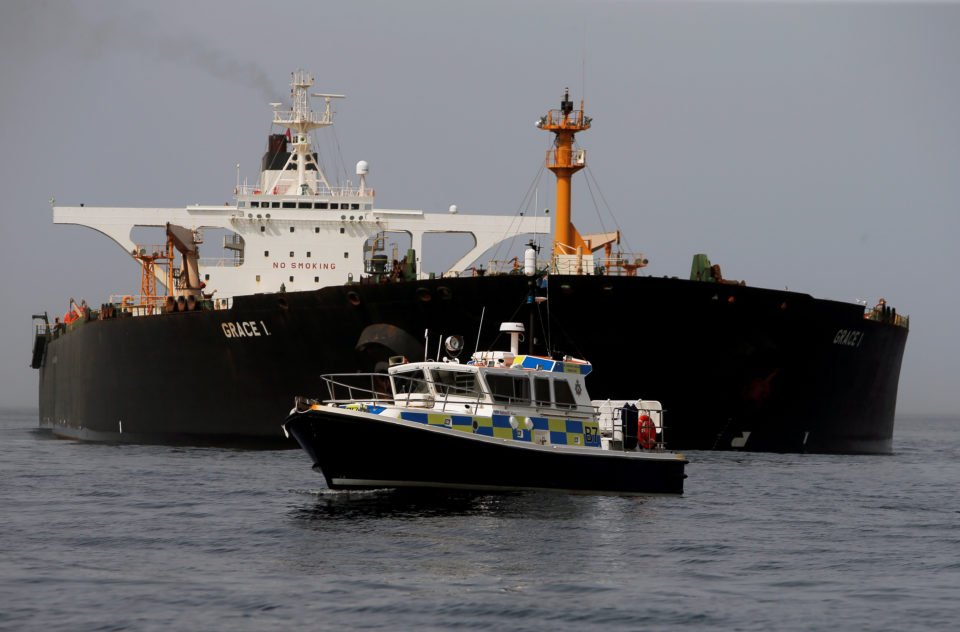 FILE PHOTO: A Royal Gibraltar Police's boat guards the Iranian oil tanker Grace 1 as it sits anchored after it was seized earlier this month by British Royal Marines off the coast of the British Mediterranean territory on suspicion of violating sanctions against Syria, in the Strait of Gibraltar, southern Spain July 20, 2019. REUTERS/Jon Nazca/File Photo

Oil prices rose more than 1% on Monday, as investors worried about possible supply disruptions in the energy-rich Middle East after Iran’s seizure of a British tanker last week.

Capping gains, force majeure was lifted on loadings of crude at Libya’s Sharara oilfield, the country’s largest, whose closure since Friday had caused an output loss of about 290,000 barrels per day (bpd).

Last week, WTI fell over 7% and Brent lost more than 6%, weighed down by economic worries and the return of U.S. production in the Gulf of Mexico after a hurricane.

“Some of the selling pressure from demand concerns seems to have evaporated this week,” said Gene McGillian, vice president of market research at Tradition Energy in Stamford, Connecticut. “The fears about geopolitics seem to have halted some of that selling pressure,” he said.

Iran’s Revolutionary Guards said on Friday they had captured a British-flagged oil tanker in the Gulf in response to Britain’s seizure of an Iranian tanker earlier this month.

The move stoked fears of potential supply disruptions in the Strait of Hormuz at the mouth of the Gulf, through which flows about one-fifth of the world’s oil supplies, but no major escalation with Britain or the United States appears imminent.

“In the cat and mouse game that Iran is playing with the U.S., it is taking calculated risks,” Harry Tchilinguirian, global oil strategist at BNP Paribas in London, told the Reuters Global Oil Forum.

Last week, data showed shipments of crude from Saudi Arabia, the world’s top oil exporter, fell to a 1-1/2-year low in May.

Speculative money is flowing back into oil in response to the escalating dispute between Iran, the United States and other Western nations, along with signs of falling supply. In early May, new, tighter U.S. sanctions on Iran took effect.

Hedge funds and other money managers raised their combined futures and options positions on U.S. crude for a second week and increased their positions in Brent crude as well, according to data from the U.S. Commodity Futures Trading Commission and the Intercontinental Exchange.