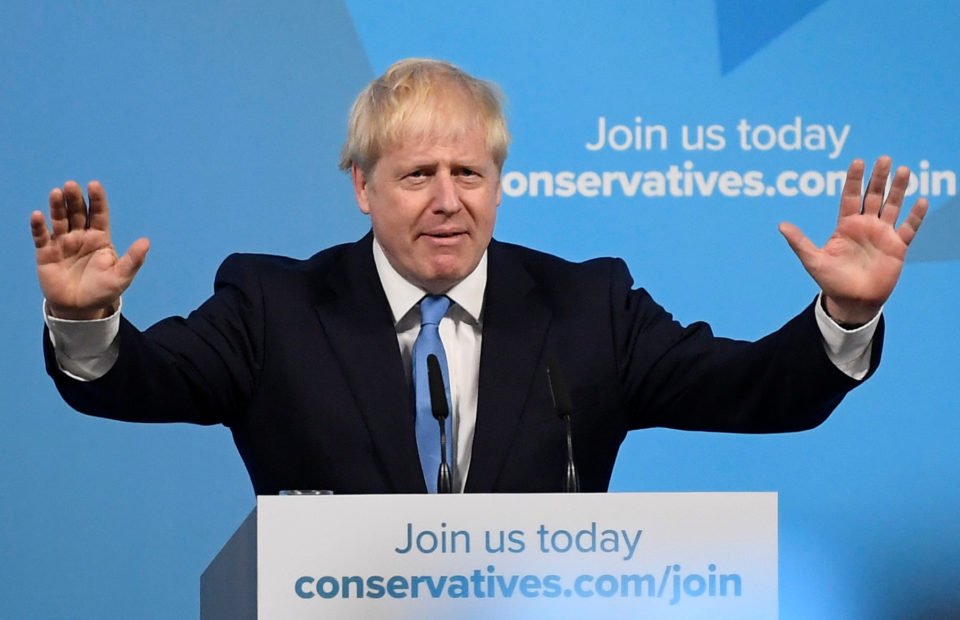 Boris Johnson, the Brexiteer who has promised to lead Britain out of the European Union with or without a deal by the end of October, will replace Theresa May as prime minister after winning the leadership of the Conservative Party on Tuesday.

His convincing victory catapults the United Kingdom towards a showdown with the EU and towards a constitutional crisis at home, as British lawmakers have vowed to bring down any government that tries to leave the bloc without a divorce deal.

Johnson, the face of the 2016 Brexit referendum, won the votes of 92,000 members of the Conservative Party, almost twice as many as his rival, Foreign Secretary Jeremy Hunt.

May will leave office on Wednesday after going to Buckingham Palace to see Queen Elizabeth, who will formally appoint Johnson.

“We are going to get Brexit done on Oct. 31, and we are going to take advantage of all the opportunities it will bring in a new spirit of ‘can do’,” Johnson, 55, said after the result was announced.

“Like some slumbering giant, we are going to rise and ping off the guy-ropes of self-doubt and negativity.”

Johnson said the mantra of his leadership campaign had been to “deliver Brexit, unite the country and defeat (opposition Labour leader) Jeremy Corbyn – and that is what we are going to do”.

U.S. President Donald Trump quickly tweeted his congratulations, saying: “He will be great!”.

The two have recently been complimentary about each other – yet Trump is one of the many leaders, including Russian President Vladimir Putin and Turkish President Tayyip Erdogan, who have been the subject of derogatory remarks by Johnson. In 2015, he accused Trump, then a candidate for office, of “stupefying ignorance” that made him unfit to be president.

An avowed Brexit supporter will now lead the government for the first time since the United Kingdom voted to leave the EU.

The pound has fallen sharply in recent weeks on concerns about a “no-deal” Brexit, and stands near $1.24, around its lowest level for two years.

The investment bank Goldman Sachs raised its probability of a no-deal Brexit to 20% from 15%, but kept the odds of a negotiated Brexit deal unchanged at 45%.

Britain, in the middle of one of the most tumultuous moments in its modern history, will be now led by a flamboyant figure known for his ambition, untidy blond hair, flowery oratory and cursory command of policy detail.

The 2016 referendum showed a United Kingdom divided about much more than the EU, and fuelled soul-searching about everything from regional secession and immigration to capitalism, the legacy of empire, and what Britishness means in the modern world.

Johnson has pledged to negotiate a new divorce deal with the EU to secure a smooth transition. But if the bloc continues to refuse, he has promised to leave anyway – “do or die” – on the current agreed date of Oct. 31 – Halloween.

Many investors and economists say this would shake global markets and tip the world’s fifth largest economy into recession or even chaos.

The EU said a no-deal Brexit would be a tragedy for both parties but again said the withdrawal deal was not up for negotiation.

“We look forward to working constructively with PM Johnson when he takes office, to facilitate the ratification of the withdrawal agreement and achieve an orderly Brexit,” tweeted EU negotiator Michel Barnier.

A Brexit without a divorce deal would also weaken London’s position as the leading international financial centre while jolting the northern European economy.

Johnson’s Conservatives need the support of 10 lawmakers from Northern Ireland’s Brexit-backing Democratic Unionist Party for even a wafer-thin majority in parliament.

Some Conservative lawmakers have threatened to topple the government to avert a no-deal Brexit, a step that would probably deepen Britain’s crisis and lead to an election.

Johnson told Conservative Party lawmakers in parliament that he does not want to hold an early general election, senior lawmaker Nicky Morgan said.

The rise of Alexander Boris de Pfeffel Johnson, often referred to as simply “Boris”, to prime minister is the grandest twist in a career that has taken him from journalism via TV show fame, comedy and scandal into the cauldron of the Brexit crisis.

Born in New York, he was educated at Eton, Britain’s most exclusive school, and at Balliol College, Oxford. He began his career at a management consultancy in the City of London but dropped out after a week.

He then turned to journalism, but was sacked from the Times newspaper for making up quotes.

After entering politics, he was dismissed from the Conservative Party’s policy team while in opposition for lying about an extramarital affair. He and his wife announced last year they were to divorce and he is currently in a relationship with the party’s former communications chief, Carrie Symonds.

In 2016, as one of the most recognisable faces of the Brexit campaign, Johnson was accused of making untenable claims, most notably that Britain would be 350 million pounds ($440 million) a week better off outside the EU.

Yet his sometimes shambolic appearance and self-deprecating persona have allowed him to survive both gaffes and scandal.

His embrace of a court jester role has won over many Britons, fed up of what they see as an out-of-touch political establishment too centred on a London elite. He served two terms as London mayor, from 2008 to 2016.

But critics say he lacks the gravitas of a true leader and some questioned whether he could deal with one of what is likely to be one of the most demanding premierships in recent years.

“I don’t know whether Boris will be able to deal with it all,” said Conservative lawmaker Keith Simpson.

After his victory was announced, Johnson himself told party members that some would question the wisdom of their decision.

“I know that there will be people around the place who will question the wisdom of your decision – and there may be some people here who still wonder what they have done,” he said.