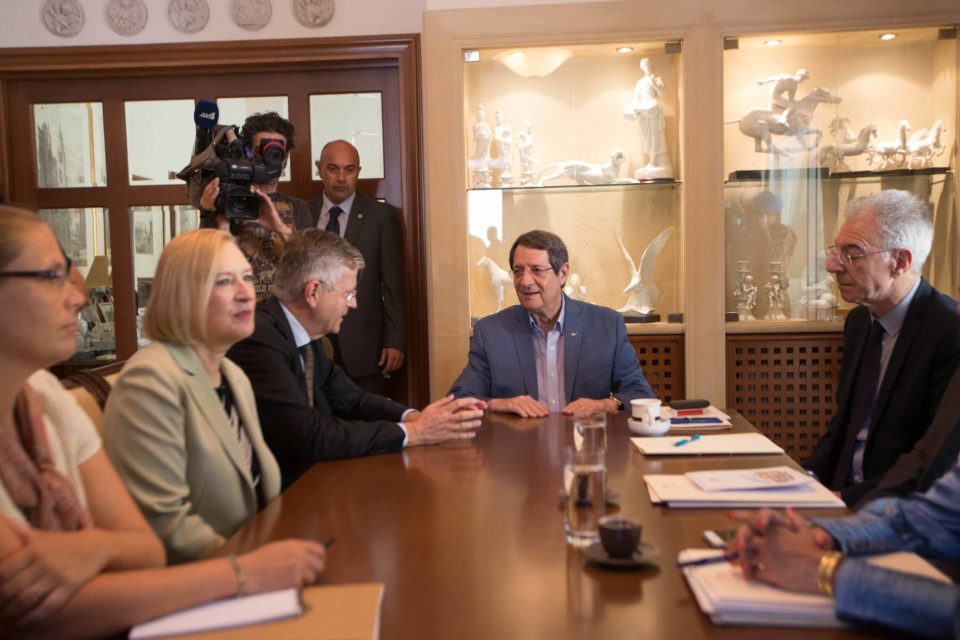 Lacroix, who will also meet Turkish Cypriot leader Mustafa Akinci on Thursday, made no statements after the meeting at Anastasiades’ home in Limassol, where he is recovering from his June 28 hip surgery, but Government Spokesman Prodromos Prodromou said later the two had also discussed various other matters including confidence-building measures.

Prodromou said proposals in this sphere, put forward by the president “for some months now” were discussed “so that a better climate can be created, the appropriate one for the resumption of negotiations.”

UN Secretary General’s Special Representative in Cyprus and head of Unficyp Elizabeth Spehar was also present at the meeting. The two leaders are due to meet jointly with her on August 9.

Prodromou said so far Turkey, instead of being willing to move forward, had created a series of obstacles to delay or cancel the negotiations from the point where they had ended at the Conference on Cyprus in Crans–Montana in 2017. Ankara has sent two drillships to the island’s EEZ. The August 9 meeting was however a positive development, the spokesman said.

Prodromou said Anastasiades and Lacroix had also talked about Unficyp’s “role and importance and its mandate in Cyprus”.

“It is encouraging that we have the UN’s full support for the continuation of Unficyp’s mandate,” he said.

Unficyp’s future has been in doubt for some time given the lack of progress on reaching a Cyprus settlement. The US has persistently raised the urgency of resuming negotiations, suggesting that some deadlines ought to be in place in the case of a new procedure. Washington has on numerous occasions reiterated its position that peacekeeping operations must not be a substitute for the political process.

The mandate is up for renewal again this week and the government has been scrambling to have any major changes edited out of the final resolution. Deliberations among the members of the UN Security Council on the resolution concluded late on Tuesday evening at UN headquarters in New York.

The text is now in a ‘tacit acceptance procedure’, according to CNA’s New York correspondent.

If no disagreement arises, the draft resolution will be tabled for adoption in an open meeting, possibly on Thursday.

Cyprus’ diplomatic efforts in recent days have focused on references in two paragraphs. Diplomatic sources told CNA the amendments made constitute a significant improvement and there were no misinterpretations.

Nicosia has been making contacts in New York to change negative references on the resolution, which provides for more cooperation between the two sides on problem-solving to avoid unnecessary tensions.

According to CNA, the resolution had included a call for the creation of mechanisms aimed at more systematic exchange of information between the two sides, and problem-solving in order to avoid tensions and negative incidents, as per the suggestion by UN Secretary-General Antonio Guterres in his latest report. This provision is a “thorny issue”, according to the CNA correspondent.

Guterres, in his latest report, highlighted the two sides’ positions on military mechanisms and stated that while the Turkish Cypriot side expressed its willingness to examine strengthened or new mechanisms, the Greek Cypriot side was reluctant as regards any new arrangements which it considered might give more recognition to the north, arguing instead that these issues needed to be addressed through the existing technical committees.