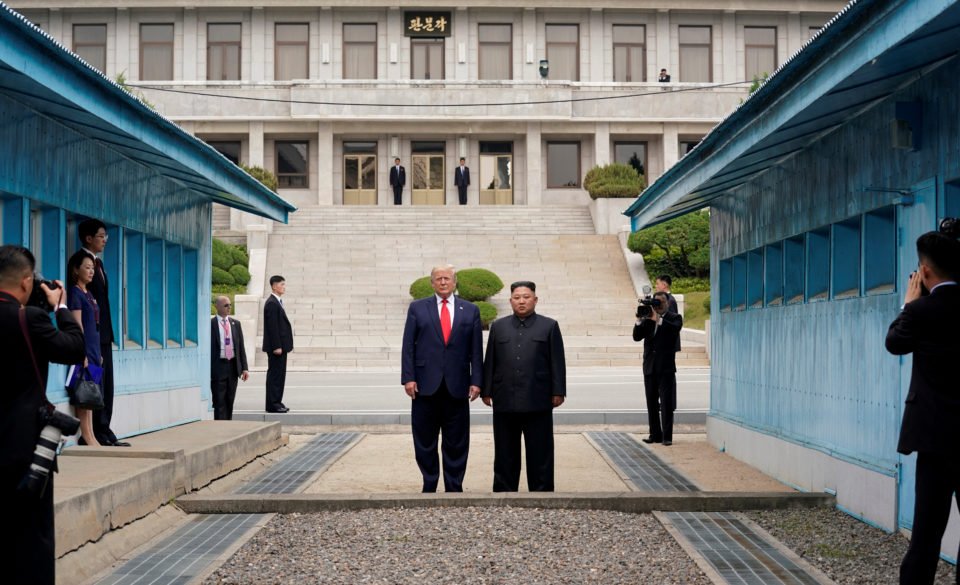 By Joyce Lee and Hyonhee Shin

North Korea launched the missiles from the coastal city of Wonsan with one flying about 430 km (267 miles) and the other 690 km (428 miles) out over the sea. They both reached an altitude of 50 km (30 miles) before splashing down, an official at South Korea’s defence ministry told Reuters.

The second, longer-range missile appeared to be a new design, but a detailed analysis was being done to verify that, the official said.

The firing of the missiles will cast new doubt on efforts to restart denuclearisation talks after Trump and Kim met at the demilitarised zone (DMZ) between the two Koreas at the end of June.

The White House, Pentagon and U.S. State Department did not immediately respond to requests for comment.

A U.S. official, who declined to be identified, said according to initial information at least one short-range projectile was fired from North Korea. Further analysis was underway, the official said.

South Korea had detected related signs prior to the launch and was conducting detailed analysis with the United States, the presidential Blue House said in a statement.

Japanese Prime Minister Shinzo Abe said the test had no immediate impact on Japan’s security, according to Kyodo News.

“We have confirmed that the situation is not one that impacts our country’s national security. Going forward, we will work closely with the United States,” Abe was quoted as telling reporters in a town west of Tokyo, where he is vacationing.

Trump’s national security adviser John Bolton, who has taken a hardline towards North Korea, made no mention of the launches in a tweet on Thursday after a visit to South Korea. He said he had “productive meetings” with Seoul officials on regional security and building a stronger alliance.

South Korea’s nuclear envoy, Lee Do-hoon, had phone calls with his U.S. counterpart, Stephen Biegun, and his Japanese counterpart, Kenji Kanasugi, to share their assessment of the situation, South Korea’s foreign ministry said in a statement.

At the time, Kim oversaw the first flight of a previously untested weapon – a relatively small, fast missile that experts believe will be easier to hide, launch and manoeuvre in flight.

After Trump and Kim met last month, the United States and North Korea vowed to soon hold a new round of working-level talks, but Pyongyang has since sharply criticised upcoming joint military drills by U.S. and South Korean troops.

South Korea’s ambassador to the United States, Cho Yoon-je, told reporters that Washington had offered to discuss the time and location of such talks but there had been no response from Pyongyang.

U.S. Secretary of State Mike Pompeo and North Korea’s foreign minister are expected to meet on the sidelines of a Southeast Asian security forum in Bangkok next week, but diplomatic sources said nothing had been decided.

North Korea’s Foreign Ministry said this month that a U.S. pattern of “unilaterally reneging on its commitments” by holding military exercises with South Korea was leading North Korea to reconsider its commitments to discontinue tests of nuclear weapons and intercontinental ballistic missiles.

On Tuesday, the North’s KCNA news agency reported that Kim inspected a large, newly built submarine, accompanied by missile programme leaders, in a possible signal of the continued development of a submarine-launched ballistic missile programme.

“By firing missiles, taking issue with military drills and showing a new submarine, the North is sending one clear message: there might be no working-level talks if the United States doesn’t present a more flexible stance,” said Kim Hong-kyun, a former South Korean nuclear envoy.

Kim Dong-yup, a former navy officer who now teaches at Kyungnam University in Seoul, said the weapons tested on Thursday appeared to be the same as the ones tested in May, which were less of a challenge than long-range missiles but “enough to subtly pressure” the United States.

“North Korea is clearly upset that the U.S. and South Korea are conducting joint military exercises,” said Harry Kazianis of Washington’s Center for the National Interest.

“We should not be shocked by this move and, in fact, we should have seen it coming.”

Nuclear talks between North Korea and the United States stalled after a second summit between Trump and Kim in Vietnam in February broke down.

Trump has repeatedly stressed his good relationship with Kim and is keen for a big foreign policy win as he campaigns for re-election in 2020.

On Monday, Trump stressed North Korea’s freeze in testing of nuclear weapons and long-range missiles, which has been in place since 2017, and positive recent exchanges.

Our View: For how much longer can we persuade Security Council to renew Unficyp mandate?