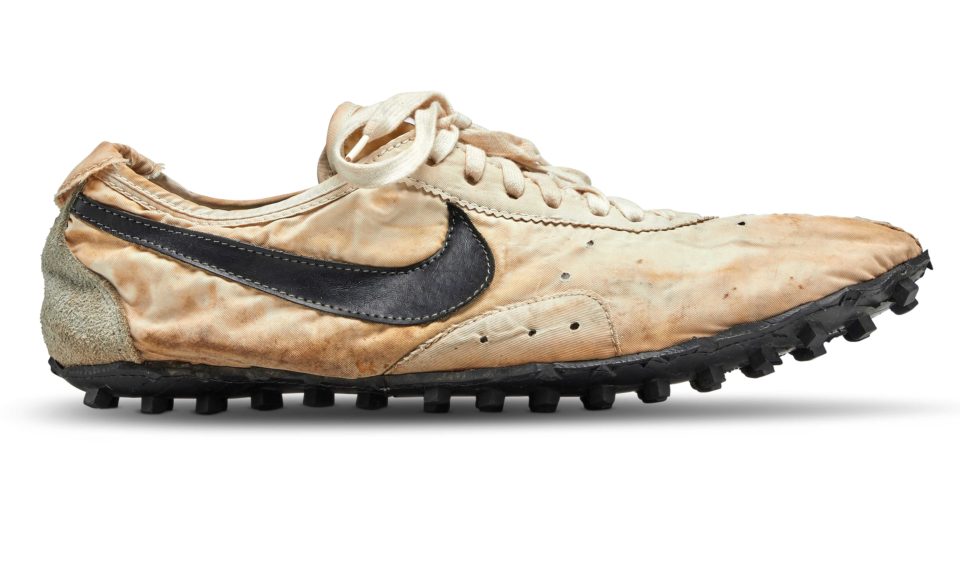 The Nike "Moon Shoe" one of only about 12 pairs of the handmade running shoe designed by Nike co-founder and legendary Oregon University track coach Bill Bowerman, is seen in this Sotheby's image released on July 11, 2019. Courtesy Sotheby's/Handout via REUTERS ATTENTION EDITORS - THIS IMAGE HAS BEEN SUPPLIED BY A THIRD PARTY. NO RESALES. NO ARCHIVES.

Move over Monet. Nike is hot on your heels.

Sotheby’s in New York is to host its first-ever auction dedicated to sneakers, underlining their fast-growing status as collectibles able to command tens of thousands of dollars.

Sotheby’s is teaming up with streetwear marketplace Stadium Goods to auction 100 pairs of the rarest sneakers ever produced, including a sample of one of the first Nike Inc running shoes with a pre-sale high estimate of $160,000.

The Nike ‘Moon Shoe’ is one of only 12 pairs created. It was designed by Nike co-founder and track coach Bill Bowerman for runners at the 1972 Olympics trials and the pair up for auction is handmade.

Other sneakers include 2011 and 2016 versions of the Back to the Future Part II limited-edition shoes by Nike that were inspired by the 1989 film starring Michael J Fox.

“We’ve long talked about how sneakers are this generation’s luxury fashion, and being able to collaborate with a brand with the history and esteem of Sotheby’s is further proof of that,” John McPheters, co-founder of New York-based Stadium Goods, said in a statement.

Other shoes in the online sale, ending on Wednesday, include sought-after and limited-edition sneakers produced by Adidas, Air Jordan and rapper Kanye West’s Yeezy collection.

Noah Wunsch, global head of eCommerce at Sotheby’s, said the sneaker sale was bringing together “art, culture and fashion” and marked another step in the auction house’s expansion of offerings of highly coveted luxury goods.

The shoes are on public exhibit at Sotheby’s in New York through Wednesday.

The highest price fetched at public auction for sneakers is thought to be $190,373 in 2017 for a pair of signed Converse shoes said to have been worn by Michael Jordan in the 1984 Olympic basketball final. The shoes were auctioned through California sports memorabilia company SCP.

UNFICYP should not leave before the Cyprus problem is solved