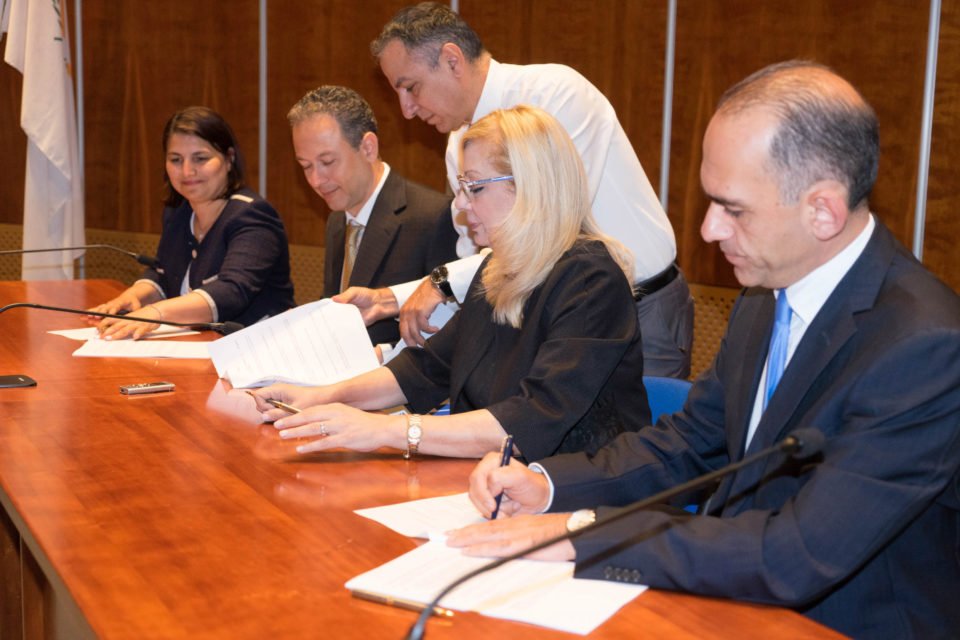 The government on Friday signed a Memorandum of Understanding (MoU) with banks and credit buyers for the implementation of the Estia debt relief scheme, which gets underway in September.

The head of the Association of Cyprus Banks and Hellenic Bank’s CEO, Ioannis Matsis, said borrowers with problematic loans who are eligible to apply for Estia were being notified.

According to Labour Minister, Zeta Emilianidou, a co-signor with Georgiades, her ministry as the implementing body for Estia was ready to begin its implementation as of September.

“Today we are taking a very important step towards addressing the problem of non-performing loans, particularly those relating to the primary residence for which there is justifiably increased sensitivity,” Georgiades said.

He recalled that the scheme, which has been approved by the European Commission, will offer the chance to restructure and alleviate the obligations for a fairly high proportion of borrowers that meet the criteria.

Matsis called on all borrowers with problematic loans to go to the banks to discuss with them acceptable and sustainable restructuring.

“We are open to dialogue where the restructuring is proper and sustainable,” he said, warning however that there would be zero tolerance for strategic defaulters, who act against conscientious groups in society such as good borrowers, depositors and tax-compliant citizens.

The Bank of Cyprus announced that 4,000 of its customers were eligible to join Estia, of which 96 per cent had already expressed an interest.

Georgiades also referred the embattled bills on foreclosures that have been deemed both by him and President Nicos Anastasiades as unconstitutional. The changes made by opposition parties on July 12, would defang the banks’ ability to recoup loans that have gone bad by making it more difficult to repossess mortgaged properties.

“Moves that weaken and complicate the legislative framework do not serve vulnerable borrowers or the public interest but rather strategic bad-payers and those who stand to gain if the cases remain for years in courtrooms,” the minister said.

He said the government would accept any change in the legislative framework that is approved by the supervisory authorities. “But we will not agree to any change that is unnecessary, rushed and that will lead our country to adventures and new risks. Nor is it a safe way to refer these laws to the Supreme Court because supervisors, rating agencies, investors may react anyway, and negative effects will also occur in this case,” Georgiades warned.

Matsis called on legislators to accept the referral of the law on foreclosures.

“Any other development strengthens and emboldens strategic defaulters even more and jeopardises the stability of Cyprus’ banking and financial system,” Matsis said.

If parliament decides to not accept the president’s veto and nix the bills he has the prerogative to refer the matter to the supreme court for adjudication.

Salvini blocks own coastguard ship with migrants on board