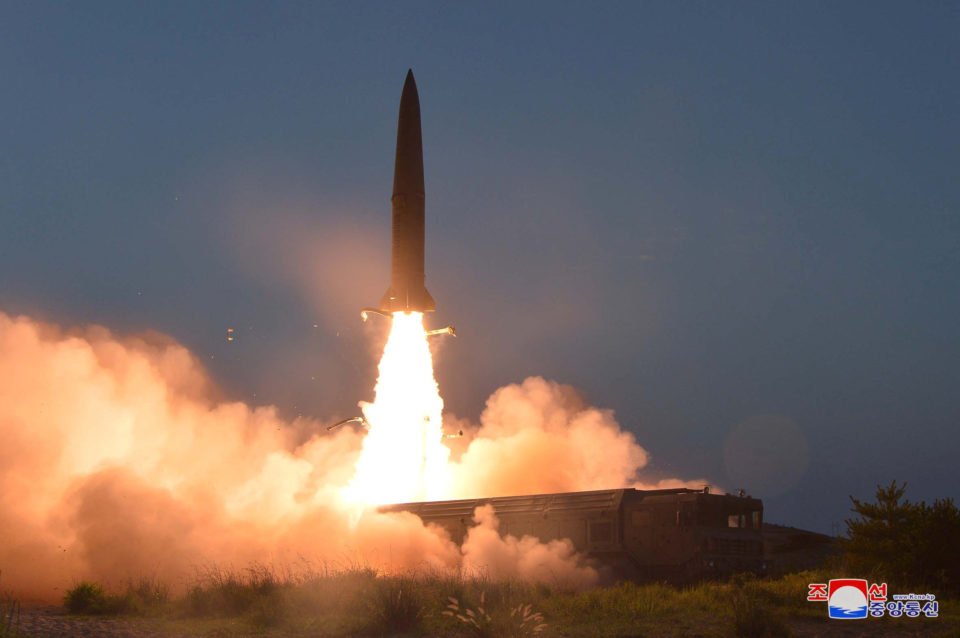 A view of North Korea's missile launch on Thursday

North Korea said on Friday its latest missile launch was a warning to South Korean “warmongers” to stop importing weapons and conducting joint military drills, a message that analysts said was also aimed at the United States.

The missile tests raises doubts about the revival of denuclearisation talks, which stalled after the collapse of a second summit between Kim and Trump in Hanoi in February.

“We cannot but develop nonstop super-powerful weapon systems to remove the potential and direct threats to the security of our country that exist in the south,” Kim said, according to state news agency KCNA.

An official at Seoul’s defence ministry said the missiles were believed to be a new type of short-range ballistic missile, an assessment echoed on Friday by the U.S.-South Korea Combined Forces Command (CFC).

A joint review with the United States showed that both missiles flew some 600 km (373 miles), further than similar previous missile tests, the defence official told Reuters.

The official also said the missiles bore features similar to Russia’ SS-26 Iskander and the ones the North tested in May – a relatively small, fast missile that experts say is easier to hide, launch and manoeuvre in flight.

A spokesman for the CFC said in a statement the launches were “not a threat directed at [South Korea] or the U.S., and have no impact on our defence posture.”

Pyongyang has shown increasing frustration via state media that South Korea has not followed through on promised economic cooperation or peace agreements, all while importing the latest F-35 stealth fighters and conducting military drills with the United States.

The KCNA report did not mention Trump or the United States, but said Kim criticised South Korean authorities for staging joint military exercises, which Trump promised to end after his first meeting with Kim in June 2018.

North Korea accused Washington of breaking that promise by planning to hold joint military exercises with SouthKorea next month and warned of a possible end to its freeze in nuclear and long-range missile tests.

While Friday’s message is very clearly directed at Seoul, it does send signals to Washington as well, said Jenny Town, managing editor at 38 North, a project that studies North Korea.

“On some level, this is like North Korea‘s version of maximum pressure on South Korea and the United States.”

North Korean state newspaper Rodong Sinmun showed photos of the missile launching, Kim Jong Un looking through binoculars and at screens appearing to show the missile trajectory, and smiling and clapping with his officials.

Kim said the test was “a solemn warning to the south Korean military warmongers” and accused South Koreans of “double dealing” for saying they support peace but simultaneously importing new weapons and conducting military drills.

South Korea‘s leader should stop such “suicidal acts” and “should not make a mistake of ignoring the warning,” Kim said.

Kim said he was satisfied with the rapid response and low-altitude trajectory of the weapon, which he said would make it difficult to intercept.

North Korea may have made some modifications to its missiles since the May test, based on initial photos and the distances travelled, said Jeffrey Lewis, a missile researcher at the James Martin Centre for Nonproliferation Studies (CNS).

Kim Dong-yup, a former naval officer who teaches at Seoul’s Kyungnam University, said the North could have launched the same weapon as May but from the maximum firing angle this time.

“The latest launch has more political purposes as the North called it a show of force rather than firing drills like before, targeting the South’s weapons purchases and joint exercises with the United States,” Kim said.

Ballistic missile tests would be a violation of UN Security Council resolutions that ban North Korean use of such technology. North Korea rejects the restriction as an infringement of its right to self-defence.

When asked what message the Trump administration was taking from North Korea‘s launch of short-range missiles, U.S. Secretary of State Mike Pompeo told Fox News that prior to U.S.-North Korea negotiations Pyongyang had been engaged in activity “far more dangerous for America and Japan and for South Korea“.

Pompeo said when Kim met Trump at the DMZ he had agreed to “avoid launching intermediate-range and long-range ballistic missiles” and “put his negotiating team back in the game”. He said fresh talks were still possible.

“You know, lots of countries posture before they come to the table,” Pompeo told Fox News.