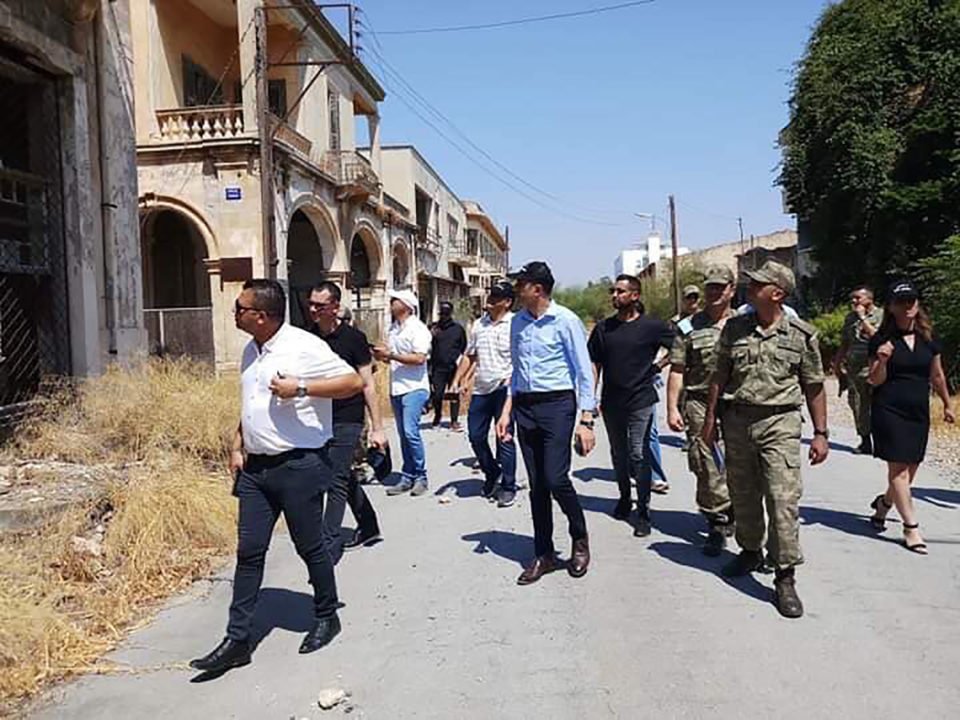 President Nicos Anastasiades will raise the issue of the fenced-off town of Varosha during his meeting with Turkish Cypriot Mustafa Akinci on August 9, it was reported on Friday.

The government said it was monitoring the situation after a visit on Thursday to Varosha by a team of experts who have been appointed by the TC authorities to make an inventory of the buildings of the abandoned town and assess their condition.

A government source told the Cyprus News Agency said they were closely following developments and the Turkish Cypriot side’s moves.

The same source told CNA that Anastasiades would raise the matter during his informal meeting with Akinci on August 9.

Τhe UN Security Council on Thursday unanimously adopted resolution 2483 renewing the mandate of the United Nations Peacekeeping Operation (Unficyp) for another six months, until January 31, 2020. Among other things, the resolution “recalls the special status of Varosha as set out in relevant resolutions.”

In the meantime, the head of the Council for Reconstruction and Resettlement, Nicos Mesaritis, said the whole thing was nothing more than a PR stunt by Turkish Cypriot ‘foreign minister’ Kudret Ozersay who adopted a “Hitler approach” and does not take into consideration the pain of people who lost their lives there and wanted to pass off as a leader who can even open Varosha.

Mesaritis told CNA that photos of the visit showed a very small group who did not even carry a pen and paper to take notes.

He added that the group did not consist entirely of engineers who could carry out proper recording of the buildings by priority of dangerousness and by repair needs.

Resettlement costs for the entire closed-off town are estimated between €4bn and €5 bn, he said, adding that the reconstruction of Famagusta was of great international interest since it was something unique worldwide.

“You get a city with urban planning from the ’55s and 60s and you interject the knowledge of the 2000s,” he said. According to Mesaritis, the whole project is a town-planning challenge which very serious university research units would be interested in studying.

As regards the hotels on the beach, Mesaritis said they were “useless” both the interior and exterior and that serious investment was necessary since one “cannot just give a tourist a room with a sea view but must also create surroundings.”

Experts will have to collect a serious amount of information so that the town can open since buildings need to be checked if they can stay standing after 45 years of having no maintenance plus exposure to the sea atmosphere and if they can withstand human presence.

“The public works department, after carrying its own study on the matter, had said that ensuring the security of access to buildings was a humongous task,” Mesaritis said.

“The logic of the occupation regime in terms of development was seen in the destruction of Kyrenia and the northern side of Famagusta and now they will be able to save Famagusta?” he asked.

Mesaritis said that as the Council for Reconstruction and Resettlement had made an action plan for Famagusta during the Tassos Papadopoulos administration, which was updated some two years ago. Apart from the actions, tasks have been assigned to officials in the public service, municipalities and the Council itself, he said, while civil engineers and architects were trained on how to carry out checks on buildings.

In the autumn the Council will print a repair guide to make sure everyone, owners and engineers know what to do if the city opens, Mesaritis said.

He also said that two years ago, just before the Conference on Cyprus in Crans-Montana, they had suggested to the Turkish Cypriot leader the idea of ​​setting up a research centre in Varosha when the town opened that would gather samples of materials from the enclosed city so that scientists from all over the world could study them.

“This idea was also supported by the Turkish Cypriot Chamber of Engineers but also by Mr Akinci himself,” he said.

Government spokesman Prodromos Prodromou on Thursday said Turkish Cypriot moves in Varosha were a clear violation of UN resolutions and do not create the necessary climate for a relaunch of the talks.

Ozersay who had accompanied the experts on Thursday said works were being sped up for the opening of Varosha.

Depending on the results of the study, he said, a decision will be made if this will take place gradually or on a one-off basis, although he said it seems unrealistic to open Varosha all at once.

He added that the closed-off town should not remain unutilised and a military area, while “the people who have rights to their properties there, have no connection to them.”

Ozersay said he was determined to make a change in an area that had become “a symbol of the status quo”.

The move follows a ‘cabinet’ decision last June on appointing a committee of experts to carry out a scientific inventory of Varosha. The decision aims at studying the town’s land registry records, the condition of its movable and immovable properties, identify properties of Islamic religious organisation Evkaf that lays claim to a large part of Varosha and environmental risks.