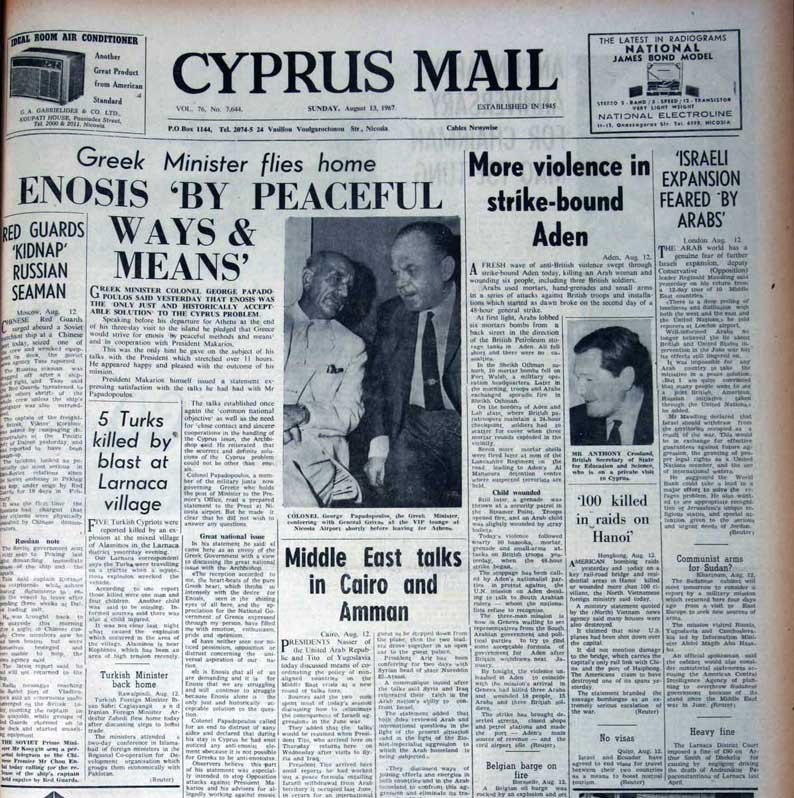 A TURKISH Cypriot friend had a surprise for me during our traditional monthly meeting at a Kyrenia restaurant. He a turned up accompanied by a leading figure from the TMT organisation.

I hasten to add that his intention was not to have me abducted, but knowing that I write for Politis and the Sunday Mail he wanted to explain to me in English that events that unfolded in Cyprus in “a clear and direct way.” Shortage of space does not allow me to cover all the issues we discussed so I will restrict myself to those I consider the main ones.

The first thing I asked Ismail (not his real name but he requested anonymity for his own reasons) was whether Turkish Cypriot nationalism, after the end of World War II, was inherent or just a response to Greek Cypriot nationalism. His answer was “25 per cent inherent and 75 per cent response.” He claimed, what he referred to as the “ethnic cleansing of Crete” created an existential fear which the Greek Cypriots could not understand because nobody had spoken to them about it.

But the main cause for the growth and radicalisation of Turkish Cypriot nationalism was the demand of the Greek Cypriots for union with Greece, which culminated in the Eoka armed struggle. Inevitably, according to Ismail, TMT emerged with the aim of thwarting enosis and securing taksim (partition). The chasm between the two sides was exemplified by their insistence on ‘enosis or death’ and ‘taksim or death’.

We see, therefore, nationalism taking over all Cypriots, especially after the enosis plebiscite of 1950, each community feeling a sense of superiority over the other and both cultivating racism, hatred, aggression and arrogance. This confrontational climate shook the foundations of the Cyprus Republic which could not take it, suffering its break-up in 1964 and the devastating disaster of 1974.

I then asked why TMT continued its activities after the declaration of independence? Why was the Turkish ship Deniz carrying weaponry from Turkey to Cyprus in 1959?  Did this not suggest that TMT was working on the demise of the Cyprus Republic so it could achieve partition? Ismail had no trouble answering. He told me that on the Greek Cypriot side there was not just one equivalent of TMT, but 10 organisations like TMT, even though today we only remember the groups of Yiorkadjis, Sampson and Lyssarides. All these groups were under the guidance of Makarios as the Akritas Plan showed.

Turkish Cypriots were more than happy with independence as they enjoyed super-privileges, the Turkish Cypriot vice-president could exercise the veto right on vital issues and their community was protected by Turkey thanks to the treaty of guarantee. The enosis rhetoric never stopped, however, and the existence of clandestine organisations left TMT with no option but to arm itself so as to avert the nightmare scenario for the Turkish Cypriots – enosis. If the Greek Cypriots abandoned the idea of enosis, worked on independence and did not dream of enosis TMT would have been dissolved or gone into inactivity, said Ismail.

I suspect that an outsider would wonder whether Ismail was correct. If the Greek Cypriots understood that enosis was an unattainable target and changed direction (an academic point, one would say) why would TMT continue its activities, given its objective was partition as a reaction to enoisis at a time when independence was, by their own admission, very favourable to the Turkish Cypriots?  In no state at no time have those who benefited from history revolted. The French Revolution was not carried out by the aristocracy and the Church but by the people, the sans culottes. If there is a revolution in Saudi Arabia to overthrow the mediaeval regime, it will not be carried out by the emirs and mullahs but by the intelligentsia and downtrodden workers.

We then discussed the negotiations that were held from 1968 to 1974 between Glafcos Clerides and Rauf Denktash, supported by the representatives of Greece (Delkeris) and Turkey (Altikaci). As everyone knows, the Turkish Cypriot side, among other things, accepted the 13 points that were submitted by Makarios in 1963 and were rejected. How did Ismail explain the 180-degree turn by Denktash, who had been declaring since 1964 that the two communities could not live peacefully together and that the only solution was partition?

His answer was that Denktash had information from Turkey that Greece and Turkey would intervene to partition Cyprus as had been agreed between their respective foreign ministers in Lisbon in 1971. Consequently, Denktash was not so bothered with the nature of a settlement, because even if it was achieved it would be doomed.

It is said that the wild men of Eoka B and TMT are miserable and have no sense of humour. There are, though exceptions. While I insisted on paying the restaurant bill, Ismail would not hear of it. “Don’t force me to use my gun after half a century to persuade you that I will pay as you are in my town.”

A grotesque choice of prime minister for Britain?

Our View: After ‘courtesy visit’, will Mitsotakis reset rules of the game?