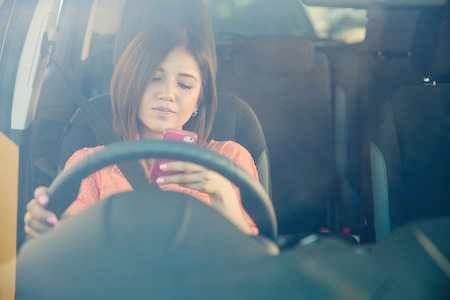 Earlier this week British road safety and breakdown organisation GEM Motoring Assist saw fit to remind all drivers that phone calls and texts – even in hands-free mode – should wait until they are safely parked, with the engine off and the handbrake on.

The call follows a report from Driving for Better Business, warning that half of company directors expect their employees to answer their phone while driving.

GEM road safety officer Neil Worth says holding and using any device while in control of a car is a potentially lethal distraction. He appealed to all drivers to understand the unacceptable level of risk that goes with using a phone while at the wheel, whether illegally hand-held or legally hands-free.

“A hands-free device may allow you to keep both hands on the wheel, but ‘hands-free’ unfortunately doesn’t mean ‘brain-free’. Using your phone while driving is an avoidable distraction which raises the risk you pose to other road users.

“Driving is a complex enough task requiring all your attention. Allowing yourself to be distracted while driving – for example by a phone conversation – puts you and those around you at higher risk.”

Research has shown that drivers using hands-free phones fail to notice hazards, even those directly in front of them. They may stop using mirrors and indicators as they try to reduce their mental workload, and they need more space to stop.

Researchers have also found that a driver’s mental distraction associated with being on a phone call can last up to five minutes after the call has ended.
All the time they assume that because they’re hands-free, they’re safe, when the truth is that they are dangerously distracted.

Worth adds: “We only have 100 per cent concentration, so if we allow ourselves to take part in a conversation or try to read and respond to data, we’re seriously reducing our ability to focus on the journey, on the road ahead and on the hazards that may be developing.
“That’s why we are encouraging all drivers to put safety first and leave their phone calls and texts until they have parked somewhere safe.

“Clearly it takes two to have a conversation, so we urge work colleagues, friends or family members to avoid calling people they know are driving. In doing so they know they are playing their part in making journeys safer.”

GEM has a number of simple tips regarding mobile phones and driving:
You’re allowed to use a mobile phone when you are safely parked, with the engine off and the handbrake on. The hard shoulder of the motorway is NOT a safe place to park and use your phone: you risk a €65 fine if you stop on the hard shoulder and it is not an emergency.

Don’t pick up your phone in any other driving situation, including when you’re stationary at traffic lights or queueing in traffic. This will also get you a fine of €85 and two penalty points: the law states that you may not ‘use an object that is not relevant to driving’.

Don’t assume that using a hands-free kit means you have dealt with the risk. You are still allowing yourself to be distracted from the task of safe driving, and you could still be prosecuted for not being in control.

Take a few minutes before a journey to make important calls or to check voice messages and emails. Work together with friends, family, colleagues and work contacts to remove the expectation that we should all be available, all the time.

Plan journeys to build in breaks from driving, where you can call, text or email or interact with social media in a safe environment.