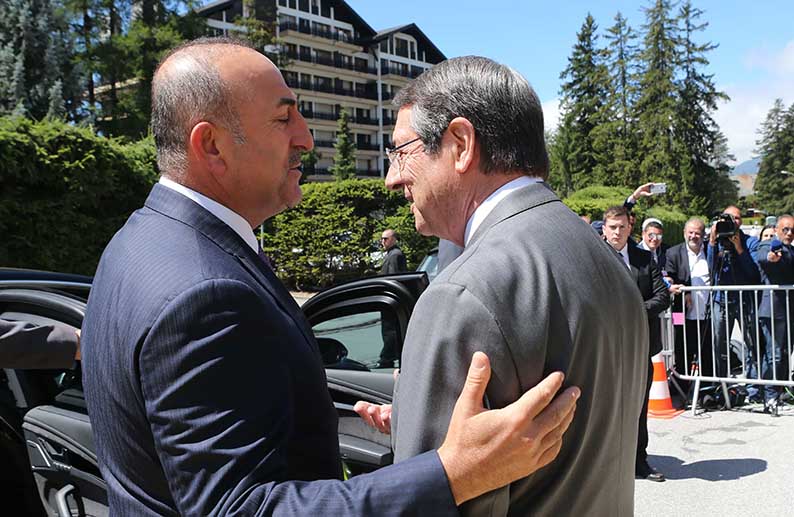 In the political game of public impressions and seeming camaraderie, no one knows who is lying to whom nowadays

How naïve Cavusoglu was to think he could get away with such a blatant lie? He said that in Crans-Montana Nik told him that the best kind of settlement was two states because the Greek Cypriots were not willing to share anything with the Turkish Cypriots and that they could talk about this option after the presidential elections.

When they met later in New York, Nik allegedly informed Cavusoglu, who told these lies in an interview with Turkish channel TGRT, that he could not secure international support for two states and therefore confederation could be an alternative. It was all a figment of Cavusoglu’s imagination, as government spokesman Prodromos Prodromou, subsequently proved (well not exactly).

He cited an interview given by the lying Turk to Politis last November in which he had made no reference to these allegations and said Nik had told him of his support for a loose federation. In the end, the truth shone through because, as we all know Prez Nik never lies.

SOME have been asking why Nik decided to take a stand now when there had been no shortage of newspaper articles in the past mentioning that he had spoken to Cavusoglu about a two-state solution and never saw the need to deny any one of them.

He has also brought up the two-state solution in private conversations he has had with many Greek Cypriots, including his council of ministers, so why is he now pretending that he never considered it an option? I hasten to add that this does not mean he said anything about it to Cavusoglu in Crans-Montana, but that he shared the idea with many Greek Cypriots is no secret.

THE CRACKPOT Bishop of Morphou, Neophytos, who not so long ago prophesied to a congregation that included the deputy director of President’s diplomatic office, that Russia would drop nuclear bombs on Turkey, has offered a scientific explanation for homosexuality.

My friend the Politis columnist, Costas Constantinou, wrote on Friday that he had tried to test the veracity of Neophytos’ theory by bringing it up with his mother: “My mother, when I asked her in a roundabout way told me I should be ashamed of myself.”

SPEAKING of priests, three bishops (Kykkos, Limassol, Tamasos) issued a joint declaration telling off hacks and threatening them with legal action, because they had been critical of the bishops’ opposition to the granting of autocephaly to the Ukrainian Orthodox church.

The three had sided with the Moscow Patriarchate in its feud with the Ecumenical Patriarch who had granted autocephaly to the Ukraine church. The bishops’ declaration called on the journos, “paternally”, to “understand their mistake, recognise the harm they caused the flock of the Church and correct all the unsubstantiated things they wrote…. and in writing to restore the truth.”

The Journalists Union responded with its own announcement accusing the bishops of “pre-emptive censorship and an attempt of intimidation of journalists.” I was unable to find out what the hacks wrote to provoke such a hostile response from the bishops for whom Christian forgiveness was not an option in this instance.

I can only speculate that some mischievous hacks suggested the bishops sided with Moscow in the Ukraine dispute because their bishoprics had been receiving generous financial contributions from wealthy Russians. The mere suggestion that these men of God based their stance on money is, to say the least, preposterous.

ATTORNEY-GENERAL Costas Clerides showed that he was more forgiving than our bishops last Wednesday when he was insulted in court by his former friend Polys Polyviou during the ongoing Bank of Cyprus case. Polyviou said during the heated exchange that Clerides was “a disgrace to the Cyprus justice system and has ruined courts.”

Did he fear he would have lost the case because Polys employs the offspring of supreme court judges? Just asking.

NOBODY was surprised to hear that Disy deputy Stella Kyriakidou was chosen by Prez Nik to be our next Commissioner at the EU, replacing Christos Stylianides. For months now it was being said that she was Nik’s choice for the post, even though Stylianides had, arguably, been Kyproulla’s best Commissioner so far.

Nik had fallen out with Stylianides over the Cyprob and was never going to give him a second term. Kyriakidou is a bit of a Mother Theresa figure, a caring and compassionate deputy who helps people with problems and who has done a lot of good work in raising awareness about breast cancer, but never participates in political debate or expresses a political opinion about anything.

She is apolitical which perhaps makes her the ideal choice for commissioner.

THE COUNCIL of Ministers decided on Thursday to give three families in the Strovilia area of the buffer zone a monthly stipend of €500 as a form of compensation for having to put up with harassment from the Turkish military.

The government had difficulty explaining the reasoning behind this decision. Deputy government spokeswoman Klelia Vasiliou, who rarely speaks, said it was because “they are affected by the occupied army,” while her boss Prodromou said the money was given “to help them overcome the financial burden caused due to the situation, as they were experiencing difficulties moving freely.”

Another explanation was that the families had been considering moving out of the area because they did not want to live in such close proximity to occupation troops. The government did not want them to move out, because it could use their harassment by the Turkish troops as a compelling argument for keeping Unficyp in Cyprus, now that the UN is questioning the continued presence of the force.

But €500 a month is peanuts for putting up with the harassment of Turkish troops and providing the government with an argument for keeping Unficyp.

THE SPOKESWOMAN who rarely speaks, had something to be happy about. Her name was given to jam produced by the head of a farmers’ association. He announced that his ‘Fruits of Troodos’ jam will be labelled ‘Klelia’ in honour of the spokeswoman, who said “I am honoured.”

It could turn out to be a very clever marketing ploy. It would also enable Klelia to say that she has done one thing of note, one thing to justify her salary, since being appointed deputy government spokeswoman. Not even Prodromos could boast that he gave his name to a jam.

THE CYBC radio proudly reported on Thursday that a “Cyprus friend” Theresa Villiers was appointed to the cabinet of Britain’s new prime minister Boris Johnson. Villiers had to be a “Cyprus friend” as her constituency is in North London – Chipping Barnet – which must have a lot of Cypriot voters.

The CyBC did not inform us, however, which part of Cyprus she was a friend of. If she were a friend of the pseudo-state she would not even have got a mention on the news, so I think it is safe to assume that we have a pro-Greek Cypriot minister in the Johnson cabinet. After Brexit, Villiers will arrange a fair and just settlement of the Cyprob in line with European values and principles.

Still seeking clues to the unknown

A new way of doing business