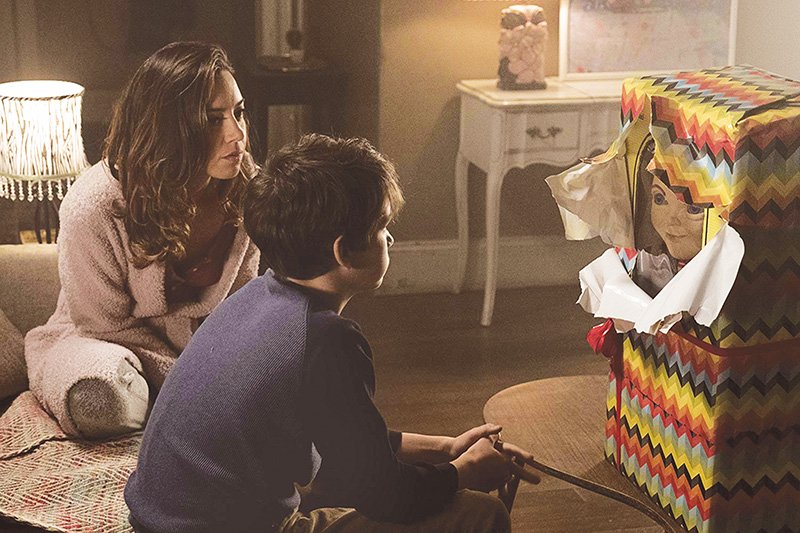 My Child’s Play credentials aren’t very impressive. I’ve seen the 1988 original – in which a child’s doll named Chucky gets possessed by the soul of a serial killer, and goes on a murder spree – and Child’s Play 3, which I recall as being terrible; I missed Bride of Chucky, which is apparently the best one (though I did appreciate the tag-line: ‘Chucky Gets Lucky’!), and the rest of the seven-film franchise, placing me at a disadvantage in reviewing this eighth instalment. Fortunately, it doesn’t really matter. At a time when most reboots are transparently an excuse to make money (Men in Black again, only with a woman), the new Child’s Play finds an angle that’s actually interesting – and can be enjoyed without prior knowledge of the franchise, beyond the basic ‘Ugly doll kills people’ template.

Chucky isn’t quite so ugly here, merely creepy as opposed to troll-like – nor is he precisely demonic, like fellow monster/plaything Annabelle. He’s a corporate product, made by a company called Kaslan that manufactures all kinds of things, from smart TVs to driverless cars – and they’re all connected, Internet-of-Things-style, Buddi the doll (“Your new best friend!”) being one of the connectors. Plug him in to the Cloud and he’ll activate other Kaslan products, not to mention ‘imprinting’ on his owner and providing emotional support. “Are we having fun?” he asks repeatedly, taking his best-friend duties seriously. “If they don’t let us pla-a-ay / They all go awa-a-ay,” he sings happily, justifying murder in the name of building a better gadget.

It’s intriguing that the child is older now – Andy was a six-year-old in the 80s original but he’s now 13, played by Gabriel Bateman – and I wondered what reaction he’d have to getting a doll as a birthday present (his single mum is played by Aubrey Plaza, bringing her sardonic good humour to a flimsy role), but in fact his reaction is spot-on. “That’s for little kids now, it came out a year ago,” he complains, his objection being not that Buddi is a doll but that he’s an older model. Andy is actually quite happy with his high-tech pet, talking to him (it?) as you’d talk to Siri or Alexa, treating Buddi like a smart new app – but alas this particular Buddi is defective, his “violence inhibitors” having been removed by a disgruntled employee in the Asian sweatshop where Buddis are made.

It might’ve been more subversive if the doll weren’t defective, if in fact it worked exactly as intended – but no matter, this is still quite enjoyable, full of sly references and tweaks on familiar elements. Here’s the borderline-abusive Mum’s boyfriend who of course is Chucky’s first victim. (Andy tries to name the doll ‘Han Solo’ – which itself is an in-joke since it’s voiced by Mark Hamill, a.k.a. Luke Skywalker – but the doll somehow mis-hears the name as ‘Chucky’, the nonsensical aspect being part of the gag.) Here’s a quick glimpse of a Buddi doll in a Leprechaun outfit, Leprechaun being another cult 90s franchise which should be getting its own reboot any day now. Here’s a kill so sadistic – a victim tortured till the pain is so unbearable he succumbs to a grisly death – it recalls the 70s nasty Bloodsucking Freaks, though I’m sure it’s been done elsewhere too. Here’s something more unexpected, a scene where Andy and his friends laugh at the ultra-violence in a horror movie, confusing poor Chucky who concludes that violence must be fun.

Does that scene contain an Author’s Message? Hard to say, since the deaths in Child’s Play don’t exactly stint on the splatter. It gives the film too much credit to call it self-aware – but it still hits some new notes, which is more than Men in Black: International did. Loyal, childlike Chucky is a bit like ‘No. 1 fan’ Annie Potts in Misery (or perhaps the car in Christine, another Stephen King joint), killing out of clingy jealousy and an earnest wish to do good, at least according to his twisted AI morality; as Andy’s geeky friend puts it, this is how every film about a robot apocalypse starts. Things get out of hand, of course. Andy and his mum put Chucky in the closet, and nobody puts Chucky in the closet. (Director Lars Klevberg surrounds it with a red filter, matching the red in the doll’s crazy-eyes.) There’s a bloody climax in a public place – a department store, in this case – that’s a bit too chaotic, but by then Child’s Play has established itself as surprisingly smart, for a horror reboot. Where should it be ranked in the franchise? Don’t ask me, I’m a stranger here myself.