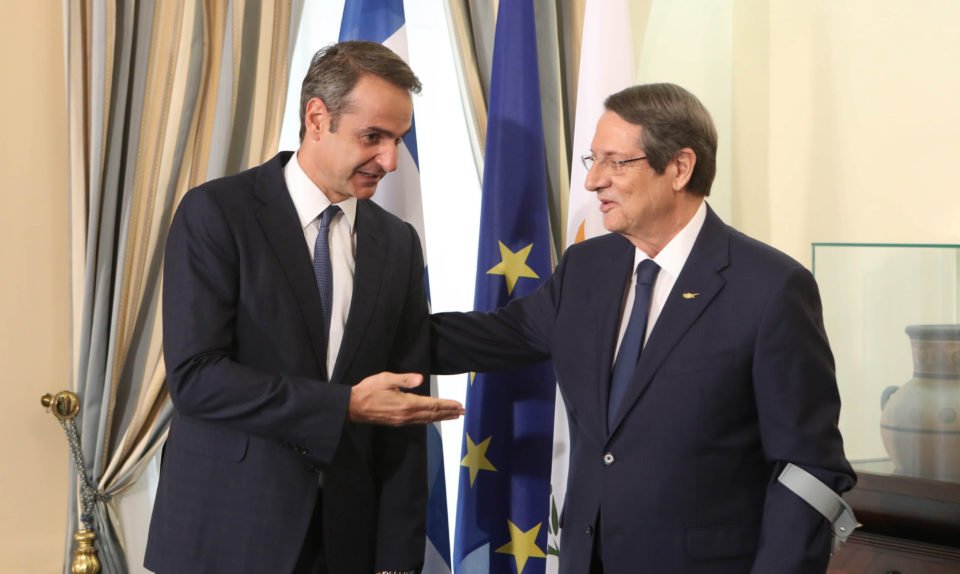 Greek Prime Minister Kyriakos Mitsotakis on Monday spoke of a new era in Cyprus-Greece relations on his first official visit since taking power earlier this month.

Following a one-on-one meeting with President Nicos Anastasiades at the presidential palace in Nicosia, Mitsotakis said his visit was taking place at a particularly critical juncture “and it is therefore inevitable that our discussions are not merely symbolic or formal but deeply substantial”.

He said the Turkish occupation remained the top concern for Greece when it comes to Cyprus, and welcomed the upcoming meeting between Anastasiades and Turkish Cypriot leader Mustafa Akinci on August 9.

“My cautious optimism is that a new framework of understanding will emerge that will allow us to make some progress on the crucial, major national issue,” Mitsotakis said.

This however would have to include the abolition of the guarantees system and the complete withdrawal of Turkish troops.

“It is a completely anachronistic system which cannot continue to apply in particular to an EU member state,” he said.

Mitsotakis said he and Anastasiades had also discussed the increasing Turkish provocations in the island’s exclusive economic zone (EEZ). “This issue does not only concern the sovereign rights of a member state but also the EU’s own energy policy.”

Any escalating Turkish policy should be dealt with at a European level, Mitsotakis said.

He also referred to the importance of the tripartite partnerships Cyprus and Greece were cultivating in the region, and said he and the president had also talked about other bilateral issues.

“I look forward to my visit being substantial in that all open issues will be put on the table and for a new, personal cooperation between myself and the president,” he added.

In his comments, Anastasiades said he would go to the meeting with Akinci “with determination and positive political will”.

He said the common position with Greece was that the resumption of talks also required Turkey’s active contribution to the creation of an appropriate climate by ending its unlawful actions in Cyprus’ EEZ as well as any plans Ankara had for opening Varosha which “unfortunately promotes a sense of suspicion and mistrust as regards the real intentions of the other side”.

Anastasiades said he and Mitsotakis had also reaffirmed the shared concerns about the major challenges being faced at a European level, including the refugee and migration crisis, climate change, Britain’s exit from the EU, and the need for a union that meets the expectations of European citizens.

“At the same time, we reaffirmed our will for joint actions in the Eastern Mediterranean by strengthening the initiatives we jointly developed with Greece through the tripartite partnerships we have established with Egypt, Israel, Lebanon, Jordan and Palestine,” he said.

Mitsotakis was welcomed at the presidential palace Monday morning by Foreign Minister Nicos Christodoulides. He reviewed the presidential guard of honour and laid a wreath at a statue of Archbishop Makarios.
Anastasiades then welcomed the Greek prime minister at the entrance as he still recuperating from surgery following a fall and could not join the presidential guard ceremony on the grounds.
Mitsotakis is accompanied by his Foreign Minister Nikos Dendias, Environment and Energy Minister Kostis Hadzidakis and government spokesman Stelios Petsas.
There will be a dinner in honour of the Greek delegation later Monday after his meetings with the Cypriot political party leaders.
On Tuesday Mitsotakis will meet Archbishop Chrysostomos. He will then visit the tombs of the heroes who lost their lives during the anti-colonial struggle against the British Rule as well as the Makedonitissa Tomb. He is also set to visit the Eldyk army camp.

Dendias has said that Mitsotakis’ visit will send a clear message to Turkey that the violation of the sovereign rights of Cyprus is not acceptable.

Companies must use buying power to root out slavery, says UK official