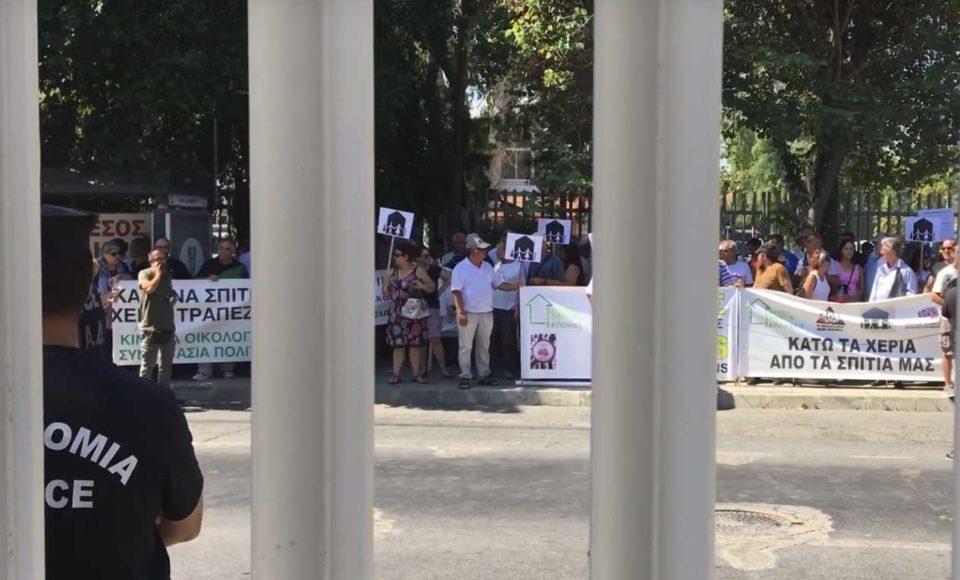 House president Demetris Syllouris faced a crowd of implacable protesters on Monday after parliament decided to postpone voting on the president’s vetoing of a bill amending legislation relating to home repossessions.

The bill, tabled by opposition parties some two weeks ago, was intended to insert additional safeguards for homeowners with mortgages in the red.

It was subsequently vetoed by President Nicos Anastasiades. On Monday, parliament was scheduled to vote on accepting or rejecting the presidential veto.

In the end, parliament decided to postpone the vote to Friday.

The move appears to have been perceived as a betrayal of sorts by the group of protesters who had gathered outside the parliament building early in the morning to put pressure on lawmakers.

The road in front of the parliament was closed off and a strong police force deployed.

Protestors were flashing banners reading ‘People in the political sphere should stop the mockery’, ‘We demand the immediate cessation of property foreclosures’, and ‘Financial robbery – Economic coup’.

The relatively small but vocal group demanded that Syllouris come out and explain himself.

Syllouris obliged, only to be met with boos and jeers. The mood turned confrontational, with the House president suggesting the demonstrators were ungrateful as parliament was in fact striving to protect homeowners’ interests.

He tried to explain that the decision to postpone voting on the president’s veto was strategic. Until Friday, he said, MPs would try to tweak the bill being vetoed so as to remove anything that could be deemed unconstitutional by the government side.

If the government were given grounds to claim the bills were unconstitutional, that would drag out the whole affair as the matter would end up at the supreme court.

And until the issue were resolved, Syllouris argued, which could take months, the banks would go about their business as usual.

However his explanations fell on deaf ears, as the protesters became even more aggravated.

“You don’t work for the people, you work to line your own pockets,” one demonstrator shouted at Syllouris.

Due to the intense heat outside, a woman fainted and was taken to hospital for treatment.

In another vote on related legislation the House plenum voted by 35-17 to reject Anastasiades’ veto on a bill that would freeze until October repossessions on primary residences which are potentially eligible for the Estia debt relief scheme.