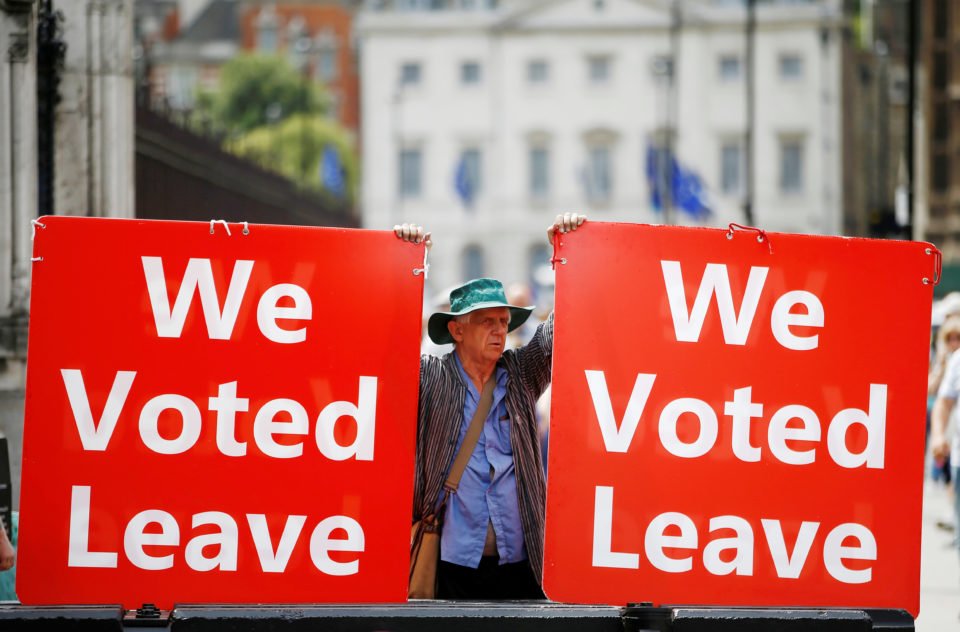 A pro-Brexit demonstator is seen outside the Houses of Parliament in London, Britain

Sterling slid to a 28-month low on Monday as Prime Minister Boris Johnson’s government said it now assumed there would be a no-deal Brexit because a “stubborn” European Union was refusing to renegotiate their divorce.

Many investors say a no-deal Brexit would send shock waves through the world economy, tip Britain’s economy into a recession, roil financial markets and weaken London’s position as the pre-eminent international financial centre.

The pound, which was trading at $1.50 on the day of the 2016 referendum, dropped a cent to $1.2282, the lowest level since March 2017. Sterling has fallen two cents since Johnson was named as British leader on Tuesday.

Johnson’s bet is that the threat of a no-deal Brexit will persuade the EU’s biggest powers – Germany and France – to agree to revise the divorce deal that Theresa May agreed last November but failed three times to push through the British parliament.

He has said that the EU must drop a “backstop” intended to keep the Irish border open. The backstop would require the United Kingdom to remain aligned to EU customs rules if a future trading relationship falls short of ensuring an open border.

The 27 other EU members, though, say publicly and privately that the divorce settlement – including the backstop – is not up for barter. Many EU diplomats say they believe an election in Britain is highly likely.

“There must be some change from the EU and if the EU are not willing to move at all we must be ready to give the country some finality,” Foreign Secretary Dominic Raab said, adding that London was “turbo-charging” no deal preparations.

Hedge funds increased their net short sterling positions – bets that the pound will fall – to the highest level in nearly a year. And in a sign investors are scrambling for protection against currency swings around the time of the Oct. 31 exit, three-month implied volatility surged to a four-month high.

Johnson has told EU leaders he will sit down for Brexit talks when they indicate they are ready to shift on the divorce deal, otherwise Britain will prepare for leaving without a deal, his spokeswoman said on Monday.

Differences over Brexit have strained the bonds that tie the United Kingdom. While the country voted 52-48 to leave in 2016, Scotland and Northern Ireland voted to stay in the EU while Wales and England vote to leave.

The question of the unification of Ireland and British-ruled Northern Ireland will inevitably arise if Britain leaves the European Union without a divorce deal on Oct. 31, Irish Prime Minister Leo Varadkar said.

Varadkar also suggested that a so-called hard Brexit could undermine Scotland’s place in the United Kingdom.

Johnson makes his first visit to Scotland as prime minister on Monday, as his Conservative Party’s leader there said she would refuse to support a no-deal Brexit.

“Our Union is the most successful political and economic union in history. We are a global brand and together we are safer, stronger and more prosperous,” Johnson said in a statement ahead of the visit.

“So as we prepare for our bright future after Brexit, it’s vital we renew the ties that bind our United Kingdom.”

Johnson’s promise to deliver Brexit, with or without a deal, has put him at odds with some in his party who oppose a “no deal” exit – including its Scottish leader Ruth Davidson.

Gordon Brown, a Scot and a former prime minister, said this month that Johnson could be the United Kingdom’s last prime minister as he could be on a collision course with Scottish nationalists.

Last week, Scotland’s nationalist leader Nicola Sturgeon wrote to Johnson telling him his Brexit plans would hurt the Scottish economy and that she would continue preparations for a second independence referendum.

From space heroes to artists: women written out of history