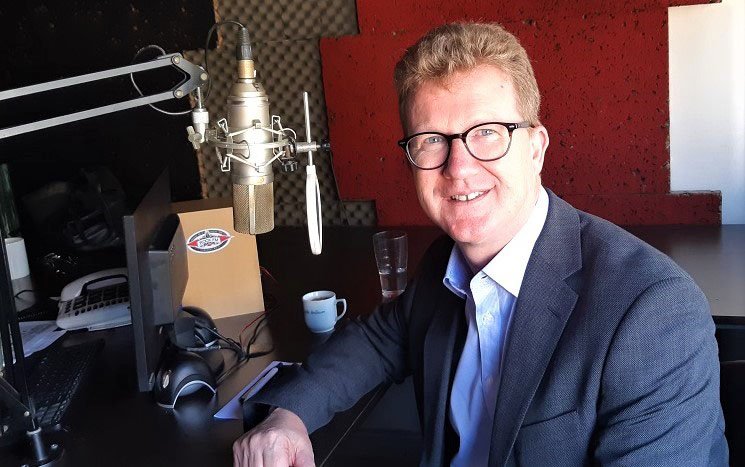 The British High Commissioner to Cyprus visited Paphos on Tuesday to participate in a live radio show to encourage any remaining British nationals who have yet to apply for residency status, to do so ahead of a looming Brexit.

Paphos district has the largest number of British ex-pat residents on the island, in particular living in areas such as Peyia, Kamares and Tala. Many have yet to regularise their status in Cyprus, despite much media coverage to do so.

High Commissioner, Stephen Lillie, said during the show on Rock FM that although some ex-pats have been given different information regarding their status, the official line remains very clear.

“Sometimes people get mixed messages but the message that we (BHC) have had from immigration in Nicosia is very clear, get what you’re entitled to. Initially, get an MEU1, once you have been here for five years and qualify for permanent residency, get an MEU3,” he said.

Listeners phoned in with a number of questions, such as how Brexit would affect living in Cyprus, would previous documentation permit them to stay in Cyprus and was there a real need for them to be updated?

“Whatever anyone may have said in the past about alternative documents, alien registration certificates, any colour books or stamps in passports, it is now about getting an MEU1 or MEU3. I know that people get a bit fed up about us going on about this, but it’s important to protect your position here,” he said.

He also stressed the need to help and assist others where needed to ensure all British ex-pats living in Cyprus have the correct paperwork.

“If you have friends, relatives or neighbours that need help getting to the immigration department or help with documents, please give them any assistance that you can.”

He assured that after Britain leaves the EU, British residents that were in Cyprus before Brexit will have their rights protected, life will go on very much the same as it does now. People will be able to work, study, access the healthcare system if eligible, own property and run business, but added that to do that, Brits will have to prove that they are legally resident in Cyprus and that the rules on that are very clear.

“Whatever old documents you’ve got, you still need to get an MEU1 or MEU3. One reason for that is to guarantee your rights post-Brexit. That includes coming in and going out of the airport. When you come in after Brexit, you will show your document and won’t get a stamp in your passport that is only valid for 90 days. Also, to access the new public health system Gesy, you need an MEU1 or an MEU3,” he noted.

Lillie said that there will also be a difference as to how long Brits will have to get their paperwork in order following a deal or no-deal Brexit. If Britain leaves the European Union with a deal, British nationals will have up until the end of 2020 to complete a registration application, but in the case of no deal, that will have to be undertaken much sooner.

“The important thing is put your application in if you haven’t please do it,” he said.

Earlier this month, parliament passed legislation regulating the right of UK nationals and their families to move and reside freely in the Republic of Cyprus in the event of a no-deal Brexit, when the UK leaves the EU on October 31.

The law establishes the legislative framework for the safeguarding of the right of UK nationals, including citizens of Northern Ireland, to remain or to choose to reside in the Republic of Cyprus should the UK leave the European Union without a withdrawal agreement.

The High Commissioner followed up his radio spot with a meeting with the mayor of Paphos, Phedonas Phedonos, at the town hall. This is the first time Lillie has met Phedonos, since taking up office in Nicosia in April 2018. The pair had a general discussion about Paphos projects, such as Paphos as a smart city, tourism from Britain and matters affecting British residents.

The High Commissioner continued his programme in Paphos with a visit to the Paphos chamber of commerce, EVE, where he discussed trade, investment and tourism, including the implications of Brexit.

Book brings to life the street cats of Cyprus