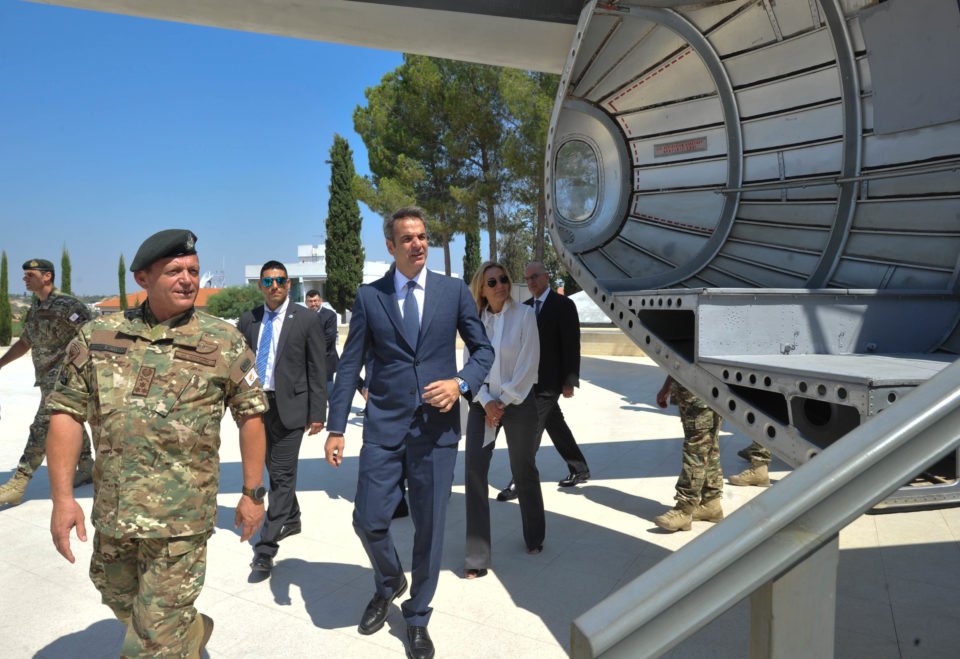 Offensive behaviour by those who dispute the sovereignty of Greece and Cyprus will not be left unanswered, Greek Prime Minister Kyriacos Mitsotakis said on Tuesday before leaving the island after a two-day official visit.

Though he did not mention Turkey by name, the Greek PM was clearly referencing Turkish activities in Cyprus’ exclusive economic zone (EEZ)

“Our message is firm, clear and sincere to those who dispute the sovereignty of Greece and Cyprus; no offensive behaviour will be left unanswered,” he said.

“We always seek peace and reconciliation but we also protect our sovereign rights under international law, and I stress that in this we are not alone.”

Mitsotakis was speaking at the Malounda army camp of the Greek contingent Eldyk, his last stop before leaving the island. Just prior he had met Archbishop Chrysostomos in Nicosia and visited the Makedonitissa Tomb where he laid a wreath.

Speaking at the Eldyk camp he said: “We’re living in a turbulent period, full of insecurity and volatility with many challenges in the wider region.”

But, he added, Greece and Cyprus have at their side all of the member states of the EU, which had already expressed their support for Cyprus in the face of Turkish activities.

“They have already sent a first clear message that the violation of international law and illegal drilling in the Cypriot EEZ will have a price, and it will negatively affect Euro-Turkish relations,” said Mitsotakis.

“And it is not just Europe. Our two countries, Greece and Cyprus, have built very strong alliances throughout the region. Their rhetorical outbursts and exaggerated and unlawful actions ultimately only serve to isolate and weaken Turkey,” he added.

The Greek prime minister said that his presence in Cyprus and in the Eldyk camp signified Greece’s firm support for Cyprus’ absolute right to exploit its natural resources. Athens, he added has always been and “will remain firmly on Nicosia’s side and its efforts to reach a solution of the Cyprus problem”.

On Monday, Mitsotakis had a meeting with President Nicos Anastasiades and later in the afternoon, with the island’s political parties, some of whom had presented him with their views and ‘new strategies’ on the Cyprus issue. All welcomed his visit and Greece’s stance on Cyprus but one, party leader, Edek’s Marinos Sizopoulos suggested in writing that Mitsotakis increase the number of Greek troops on the island.

“The focus of our proposals is the need to adopt a common national policy with Greece and Cyprus in the context of dealing with Turkish expansionism as effectively as possible,” Sizopoulos said afterwards.

This common policy, “which should be formulated as soon as possible”, he said, should be based on three main pillars. One was a ‘political pillar’ with concrete actions from the UN and EU.

The second should be further upgrading of the island’s energy programmes, and thirdly a military pillar “because to enable the other two to have credibility, there should be at least a rudimentary military support”.

Asked what Mitsotakis thought of his proposal, Sizopoulos said: “I think it is better for the Greek prime minister to give his views. We have been told that the positions we have submitted are very interesting but that he is coming from a different perspective.”