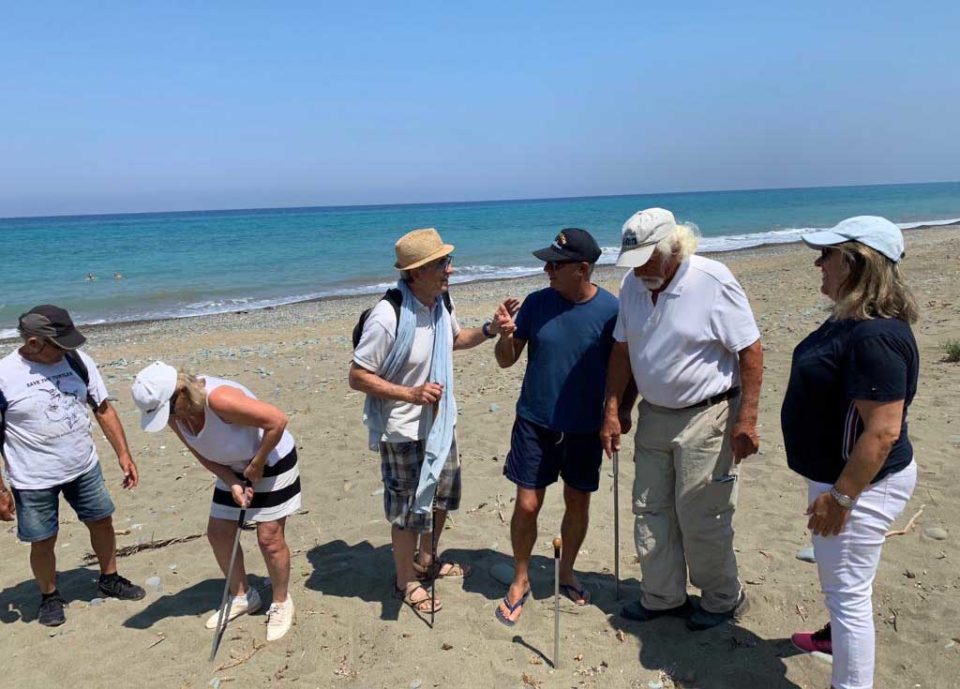 Averof Neophytou on the beach with other officials

The Argaka community council announced on Tuesday it would support the Sea Turtles Protection Programme but that it would turn part of the protected beach into a swimmers’ area with an environmentally-friendly facilities for visitors.

The community council said in an announcement it wished to restore the truth following outrage last week over Argaka community leader Spyros Pelopidas and a group of locals preventing experts on two separate occasions from placing cages above turtle nests at a protected beach.

“Unfortunately, the wrong impression was given which does not correspond to reality at all,” the local authority said.

It added that during an informal meeting with Disy leader Averof Neophytou on Saturday with the participation of competent state officials and experts implementing the sea turtle protection programme, it was reconfirmed that the programme would carry on with the help of the Argaka local authority and community.

At the same time, it has been agreed that a small part of the beach would be used as a licensed swimmers’ area and that the necessary infrastructure would be created “with respect to the environment and the area’s ecosystem.”

It was also agreed that state services would address problems faced by the coastal area such as soil erosion.

The community council also thanked Neophytou for his initiative which it said ended well.

The decisions taken, if implemented, will benefit the area and collective efforts for the protection of the turtles.

Area residents, it said, more than anyone else, are the first to respect, protect and love the environment of their area and the proof is in that after all these years, the turtles have been there, even before the protection programme was introduced.

Neophytou, from Argaka himself, held a meeting on Saturday to stop further hinderances to the protection programme in the area.

The Disy leader told Cyprus Mail that “the spawning of Caretta caretta and Chelonia Mydas sea turtles is a blessing and is of huge advantage to the specific area of Paphos.”

He added that everyone should embrace and support the programme and its team.

Argaka will organise an event for experts from the turtles programme to inform locals about its significance. At the same time, the Department of Fisheries will set up an information centre for the turtle protection programme at Argaka’s beaches.

Argaka is within the Natura 2000 conservation network, and the area includes the main breeding grounds for the Caretta Caretta and Chelonia Mydas turtles.

Meanwhile, the instructions of the Attorney General after last week’s incidents are pending, following police investigations into complaints that the local authority of Argaka and residents in the area obstructed the programme.

Sustainability: neither quick nor cheap

Our View: President should let Supreme Court decide on foreclosures