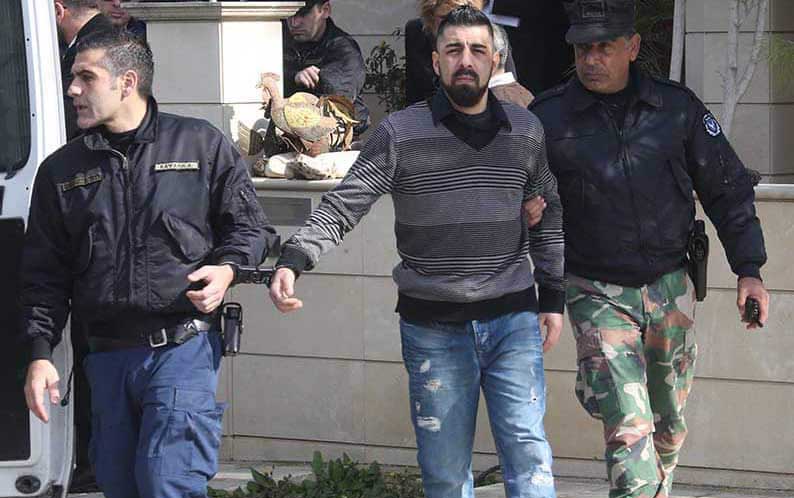 The main suspect in the brutal double murder of a couple in their Nicosia home last year was sentenced on Wednesday to two consecutive life sentences after he unexpectedly pleaded guilty to all charges.

Loizos Tzionis, 33, had been charged with the premeditated murders of Giorgos Hadjigeorgiou, 60, and his wife Dina Sergiou, 59, in April 2018.

Tzionis had changed his plea a number of times over the trial, but his final guilty plea came after the court sentenced earlier in the day a second defendant, Tzionis’ half-brother, Lefteris Solomou, to six years in jail in connection with the crime.

Solomou faced two charges of conspiracy to commit robbery and possession of assault instruments. He had recently changed his plea following a deal with prosecutors who took premeditated murder in his case off the table.

Tzionis then said he wanted to plead guilty to all charges.

Tzionis heard the sentencing calmly, while reports said the court, the prosecution, the defence, and family and friends present at the court were shocked by his sudden confession.

Judge Charis Poyiadjis said: “The defendant killed his victims in cold blood and brutally in their home.”

Tzionis did not receive sentences for the other charges brought against him, the court decided.

His lawyer said that he was not aware that his client would confess, and asked to be withdrawn from the case. The judge allowed him to leave the courtroom.

Before his sentencing, Tzionis apologised to the family of his victims, as well as the other defendants Sara Shams, Lefteris Solomou, and Marios Hadjixenofontos, who did not want to accompany him that night.

Prior to the sentencing on Wednesday, Tzionis had changed his plea for the shocking crime a number of times, saying during previous hearings his human rights were violated and that he was coerced into signing testimonies as he underwent cocaine withdrawal.

However, at Wednesday’s hearing Tzionis said: “Cocaine is a nasty substance, which causes you to lose you mind.  It took my mind away from me.  I didn’t want to threaten them [other defendants] into following me.  To commit actions that were not right.  Especially Marios, who I asked come with me.  Sorry to my grandparents, as well.”

In a murder that shocked Cyprus for its brutality, Tzionis stood trial for killing English School teacher Giorgos Hadjigeorgiou and his wife Dina Sergiou in what appeared to be a botched robbery on the night of April 18-19.

All four suspects involved had admitted their involvement in the crime, according to police, with Tzionis being the mastermind and the person who killed the couple.

The group got away with nothing as the safe Tzionis had anticipated finding had been removed.