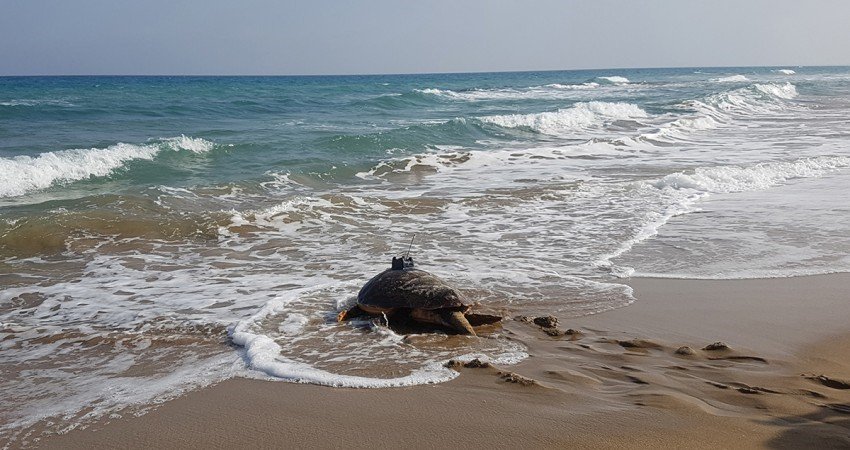 Pambos setting off on one of his journeys

Pambos, a Caretta Caretta turtle, is travelling around the Cyprus coast looking for ‘romance’, according to environmental group, BirdLife Cyprus.

Pambos, a male turtle weighing 43kg and 71cm in length, was accidentally caught and released by fishermen near Famagusta last March, but before he was released he was fitted with a GPS locator so that conservationists could monitor his movements.

It is part of a BirdLife project ‘Cyprus Bycatch’ being carried out in collaboration with Spot (Society for the Protection of Turtles) in northern Cyprus. It attempts to understand and find ways to tackle the problem of by-catches of vulnerable species in Cypriot waters. A solution they came up with is to attach GPS locators on accidentally fished turtles to ensure they are released and to study their journeys.

Pambos caught the organisation’s attention, because unlike other turtles he seems to be moving constantly. His peculiar behaviour shows he is probably a migratory turtle that travelled all the way to Cyprus to mate.

According to GPS observations, Pambos moved along Famagusta Bay with occasional appearances in the Cape Greco protected area. On April 19 Pambos left Cape Greco and headed towards Episkopi Bay where he arrived on April 24. He spent a month there and then continued towards the shores near Paphos airport. On May 30 Pambos left Cyprus and headed west and has now been located near Tunisia.

BirdLife said it is fascinating to know that in about two months’ time Pambos’ descendants will be born in Cyprus.

At present BirdLife is observing 12 turtles that were accidentally caught, rescued and named by the fishermen themselves.

One of the biggest threats seabirds and other sea animals are facing is accidental fishing, according to BirdLife. The organisation hopes that their satellite devices and diving technology will ensure a safe future for the turtles.

BirdLife Cyprus was founded in 2003 and today is one of the leading nature protection organisations in Cyprus. The organisation works at both local and European levels and their aim to protect the wider biodiversity of Cyprus.

Apple’s services, wearables shore up results as iPhone drops below half of sales

Pochettino: I have no influence over Tottenham transfers