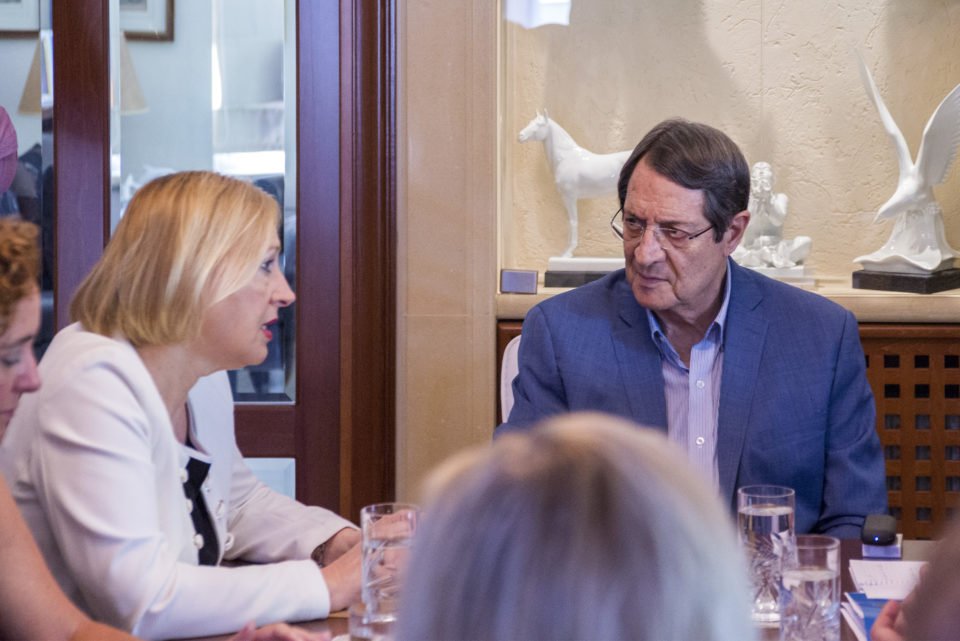 The previous meeting between Anastasiades and Spehar

President Nicos Anastasiades is to meet with political leaders on Monday ahead of his talks with Turkish Cypriot leader Mustafa Akinci later next week, government spokesman Prodromos Prodromou said on Thursday after the president met with UNSG Special Representative Elizabeth Spehar in his residence in Limassol.

The political leaders’ meeting is to take place on Monday morning, he said.

As regards the discussion with Spehar, Prodromou said the UN official briefed Anastasiades on the meeting of the UN Security Council and the renewal of Unficyp’s mandate.

They also discussed Anastasiades’ upcoming talks with Akinci on August 9 at her office in the Nicosia buffer zone. Spehar also met with Akinci on Tuesday.

Prodromou said they will be attended by Spehar but the two leaders will have the opportunity for a one-on-one meeting.

“It is something they will regulate between them on the spot,” he said.

He added that Anastasiades has called for a discussion with political leaders ahead of his meeting with Akinci.

Prodromou said the president will see Akinci “with positive spirit and the expectation that they will be able to clarify all those necessary to pave the way for what himself has been seeking for a long time, the relaunch of the talks for the solution of the Cyprus problem.”

He said it will be a “free, informal discussion.”

Later in the day, media in the north reported that Akinci would too meet with Turkish Cypriot party leaders ahead of the August 9 meeting. Akinci had reportedly also meetings with academicians and members of his negotiating team.

Plant of the week: Popular house plant used to treat arthritis in Mexico