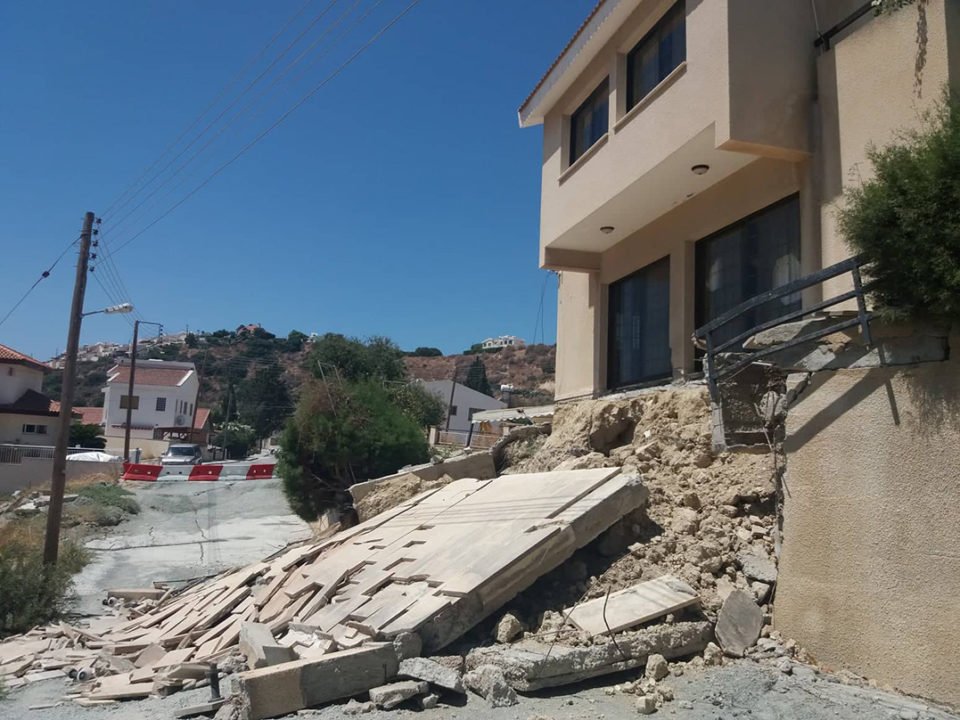 INTERIOR minister Constantinos Petrides visited the area of Pissouri on Thursday morning where an ongoing landslide has destroyed dozens of properties but underlined that no compensation from the government would be forthcoming to affected owners whose homes have been deemed too dangerous to live in.

Elina Zoi, a lawyer representing a group of the affected homeowners, confirmed that Petrides said that the only way for compensation would be through litigation.

“The minister said that unless the courts decided compensation was due, there is no chance of this for homeowners. I explained that they wanted to try a political solution first, many are elderly and they know they may not be around when a decision is made if they take court action,” she told the Cyprus Mail.

She added that when a minister is so clear there is ‘no other choice’ and legal action is now something to be seriously considered. The lawyer said she will now discuss with her clients who wants to start this procedure.

No insurance company will insure against landslide damage and the properties were all built by different developers.

According to Zoi, Petrides and members of the geological survey department, members of Pissouri council and other ministry employees, got a panoramic view of the area from a hilltop. This was followed by a meeting held at a taverna in the square.

“The minister did not wish to share the measures just yet, as the relevant parties had only held their first meeting earlier this morning and no decisions have been made,” she said.

However, these preventive measures will aim to ‘support the area’, ie. a hill, which as yet is unaffected.

She added that officials will examine documents from a tender and decide if they will proceed with the company in September/October. This company will then have four months to prepare a preliminary report as to what measures can be taken and propose two or three possible solutions, she said.

“I find this very strange to take measures before a study is done. First the investigation should take place and then the measures introduced,” said Andreas Evlavis of the Paphos Green party.

Many of the affected homes have virtually collapsed, the result of a continuous and accelerating landslip and many homes are now deemed unfit for habitation. Homes and gardens are ripped apart, walls and pools are collapsing and roads split, buckled and impassable.

Desperate homeowners have long pleaded with the government for help, but to no avail. In 2015, the then minister, Socratis Hasikos, said it was the government’s duty to intervene, but since his resignation in May 2017, no action has been taken

Petrides said that he will request financial help for those who have been forced to abandon their homes when the cabinet reconvenes in September, she said.

“He stressed that this is not compensation and no amount was mentioned, but it would be towards rent,” she said.

Evlavis said that the government has done nothing to help homeowners who are both Cypriots and non-Cypriots in the last seven years since the problems were first encountered.

In addition, Evlavis said that the minister was angry that the situation has had media coverage both in Cyprus and the UK.

“He blamed British residents who are complaining to the press here in Cyprus and in the UK, this is a kind of racism. What they have done is normal and I don’t think that this was the right reaction, it shouldn’t have been mentioned,” he said.

Zoi added that a few people argued that the situation is damaging for Pissouri which angered the minister who said that the government doesn’t accept blackmail (going to the press).

The minister didn’t greet waiting residents with the exception of one of the affected homeowners, Peter Field, when Zoi introduced him.

“The minister didn’t greet any of us and he could have, as some are Cypriot; he said hello to me when I was introduced, before moving on. I had opened the gate of our house in the hope that he would take a look, but he didn’t. As far as I know, he didn’t go to any of the homes,” Field told the Cyprus Mail.

In April, the auditor-general Odysseas Michaelides announced that the government should not essentially assume responsibly and compensate as it would set a precedent.

Our View: Anastasiades needs to move forward, not walk out on talks

US formally withdraws from 1987 nuclear pact with Russia (Update)