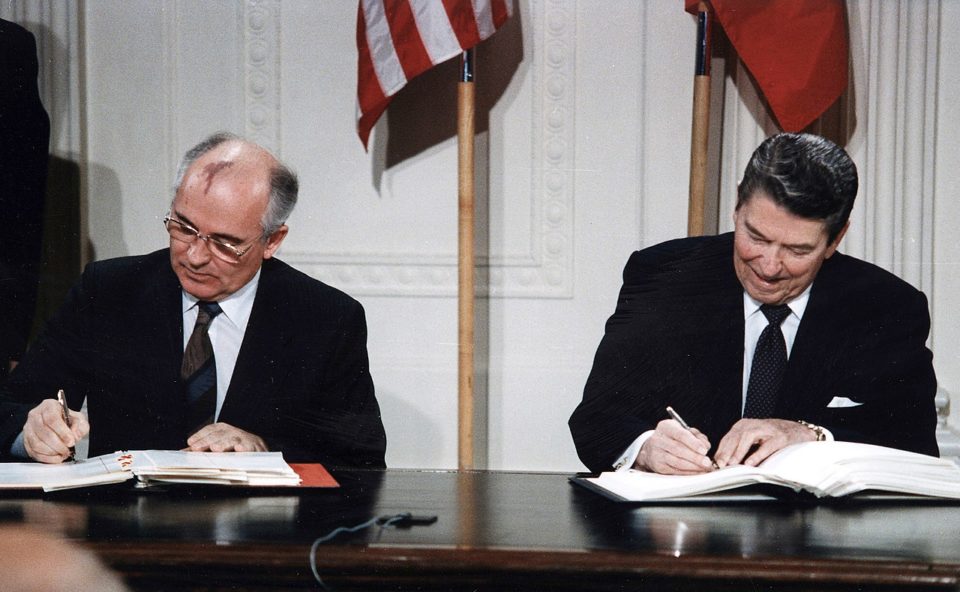 The United States formally withdrew from a landmark nuclear missile pact with Russia on Friday after determining that Moscow was in violation of the treaty, something the Kremlin has repeatedly denied.

US President Donald Trump made the determination that the United States would terminate adherence to the 1987 arms control accord, known as the Intermediate-range Nuclear Forces Treaty (INF), senior administration officials told reporters.

The treaty bans either side from stationing short- and intermediate-range, land-based missiles in Europe. Washington signalled its intention six months ago to pull out of the agreement if Russia made no move to adhere to it.

“The United States will not remain party to a treaty that is deliberately violated by Russia,” Secretary of State Mike Pompeo said in a statement about the US withdrawal.

“Russia’s noncompliance under the treaty jeopardises US supreme interests as Russia’s development and fielding of a treaty-violating missile system represents a direct threat to the United States and our allies and partners,” Pompeo said.

The senior administration officials, who spoke on condition of anonymity, said Russia had deployed “multiple battalions” of a Russian cruise missile throughout Russia in violation of the pact, including in western Russia, “with the ability to strike critical European targets.”

Russia denies the allegation, saying the missile’s range puts it outside the treaty, and has accused the United States of inventing a false pretext to exit a treaty Washington wants to leave anyway so it can develop new missiles.

Russia has also rejected a US demand to destroy the new missile, the Novator 9M729, which is known as the SSC-8 by the North Atlantic Treaty Organisation.

In response to the US move, Russia said it had asked the United States to declare and enforce a moratorium on the deployment of short and intermediate-range nuclear missiles in Europe.

“We have proposed to the United States and other Nato countries that they weigh the possibility of declaring the same kind of moratorium on the deployment of short and intermediate range missiles as ours, like the one announced by Vladimir Putin,” Deputy Foreign Minister Sergei Ryabkov was quoted as saying by the TASS news agency.

The INF treaty, negotiated by then-President Ronald Reagan and Soviet leader Mikhail Gorbachev and ratified by the US Senate, eliminated the medium-range ground-launched missile arsenals of the world’s two biggest nuclear powers and reduced their ability to launch a nuclear strike at short notice.

The dispute is aggravating the worst US-Russia friction since the Cold War ended in 1991. Some experts believe the treaty’s collapse could undermine other arms control agreements and speed an erosion of the global system designed to block the spread of nuclear arms.

Trump has sought to improve US relations with Russia after a chill during the tenure of his predecessor, Barack Obama. He and Russian President Vladimir Putin spoke by phone on Wednesday about Siberian wildfires and trade.

Arms control did not come up in the call, the officials said.

European officials have voiced concern that if the treaty collapses, Europe could again become an arena for nuclear-armed, intermediate-range missile buildups by the United States and Russia.

The officials said the United States was months away from the first flight tests of an American intermediate-range missile that would serve as a counter to the Russians. Any such deployment would be years away, they said.

“We are just at the stage of looking at how we might further the development of conventional options,” one official said.

Trump has said he would like to see a “next-generation” arms control deal with Russia and China to cover all types of nuclear weapons.

He has broached the topic individually with Putin and Chinese President Xi Jinping, including at the G20 summit in Osaka in June.

China is not a party to nuclear arms pacts between the United States and Russia and it is unclear how willing Beijing would be to be drawn into talks.

China’s Foreign Ministry has reiterated that the country had no interest in joining such talks.