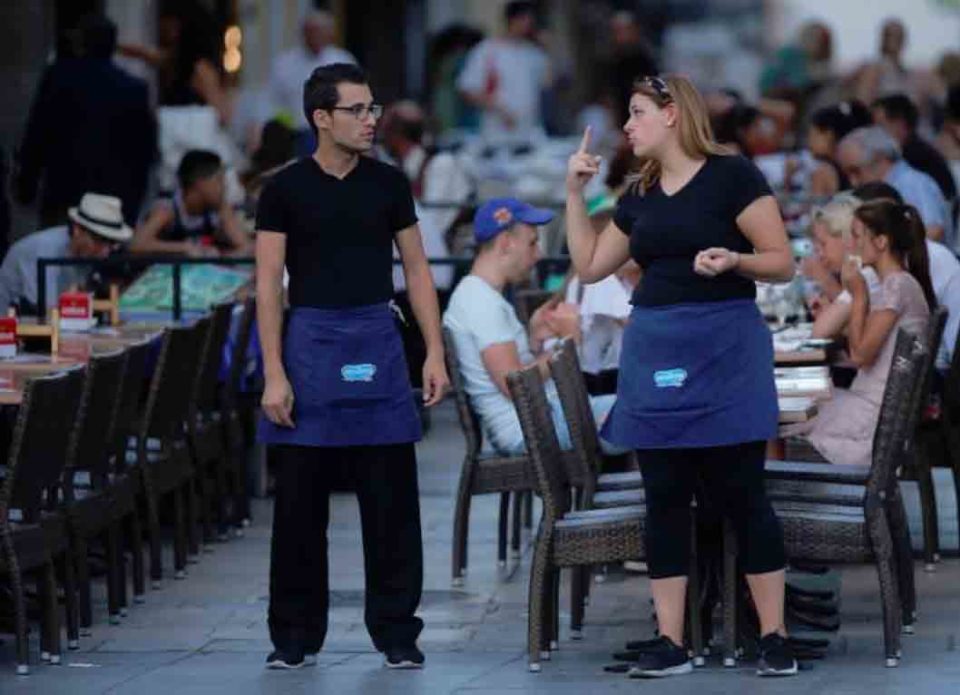 A waitress and a waiter chat as they wait for customers at the terrace of a restaurant in downtown Ronda, southern Spain

DoorDash founder Tony Xu found himself in a tricky position last week. One of America’s biggest food delivery service was revealed to be effectively pocketing tips customers gave its workers as thanks for good service. The furore revealed two rival theories of prices.

In most of Europe, tips – sometimes known as gratuities or service charges – exist only as a sum added to restaurant receipts, often automatically. They are a distant vestige of the days when service personnel were social inferiors in need of handouts. In the United States, however, those dark days have not yet ended. Tips account for a big part of the income in some lines of work, including delivering meals.

DoorDash customers who give tips are generally acting according to the first theory of gratuities. In this approach, tips are a humanising force in the relationship between the server and the served. The free offering, the literal meaning of gratuity, is supposed to exist outside the commodified services available in modern economies.

It’s a nice theory, but basically a fantasy. Tips are now so well-integrated into pay arrangements that there is rarely anything personal about them. Workers count them into their expected income. So do their bosses, who are able to offer lower pay rates as a result.

In the United States, tipped jobs have a special reduced minimum wage, though the government still offers some protection to some of the generally low-paid workers in these service professions. Even so, the gratuity system mostly adds precarity to poverty.

DoorDash did not treat tips as humanising. Until bad publicity forced a retreat last week, the company’s policy was simply to treat the amount a customer had added as a tip as revenue. The payment had no effect on the delivery person’s income.

The company argued this was fair. It meant the piece rate for deliveries was not influenced by a particular customer’s view on tipping. Besides, revenue from the tips allowed the company to pay its delivery people more.

The argument has merit, but it is hard to see Xu as a friend to his workers. After all, DoorDash follows the standard industry practice of keeping costs down by treating delivery people as independent contractors. They do not have the rights and security – including the minimum wage – enjoyed by regular employees.

DoorDash, like most gig economy companies, follows the second theory of service charges: the optimisation approach. In this interpretation, the company is supposed to maximise its revenue, and gratuities are just a way to squeeze more out of generous customers.

This theory extends far beyond taking advantage of goodwill. Companies minimise labour costs, squeeze suppliers and lobby governments for favourable treatment. In other words, they do whatever they can to maximise earnings.

Economists often argue that society is helped by this single-minded approach. For example, dynamic pricing enables airlines to constantly adjust fares according to passengers’ willingness to pay. The result is more flights and fuller planes.

There is even a far-fetched argument that pocketing tips boosts the income of delivery people. How? Well lower menu prices might increase demand, make better use of kitchens and ingredients, and leave more money to pay the people carrying the food.

On the other hand, non-economists are often suspicious of dynamic and hidden pricing. They would like the price of a flight or a meal to roughly reflect the cost of providing it. Not that long ago, many economists felt the same. To Friedrich Hayek, the guru of free markets, clear pricing spurred efficiency and promoted flexibility.

The optimisation approach is not necessarily an improvement. The blind search for profit certainly does nothing for improving worker-customer relations. More broadly, while shareholders may gain from revenue-maximisation techniques such as deceptive advertising and lobbying for biased regulation, these tend to be bad for the common good.

If the common good is the goal, it might be worth reviving an even older approach to wages and prices, namely that they should be fair. In other words, both workers and customers should get as good a deal as the productive capacity of the economy allows.

This theory dominated pre-industrial European economic thinking. In the 19th century, it was endorsed by both enlightened capitalists and moderate trade union leaders. Although it has largely disappeared from academic economics, the idea lives on in high minimum wages and taxpayer-funded worker protection plans. There is an echo of it in the first theory’s approach to tipping: it is fair to give workers monetary thanks for delivering a good service.

The fairness theory could include investors. In that case, DoorDash and its gig economy peers would have a lot to worry about. Not only would they need to set clearer prices and pay more stable wages, but they would need to rethink their business models.

After all, the typical startup’s plan involves years of losses followed eventually by vast earnings. While the hope of the latter keeps investors keen, neither the extensive losses nor the hoped-for gains are fair to the rest of society.

Anastasiades will ‘try to reach out to Akinci’