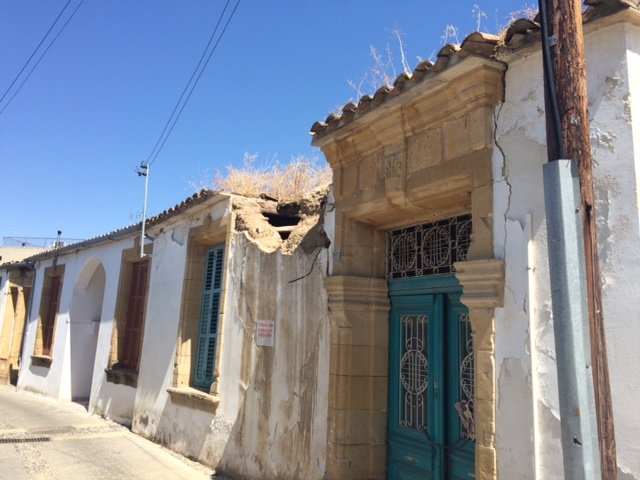 The roofs on many of the houses have caved in

While EU and other funding have helped ensure the survival of many traditional houses in old Nicosia, ageing buildings in smaller neighbourhoods have no such support system and this past winter’s rains have taken a heavy toll.

Whole streets are crumbling while some houses are long past the state of repair.

The Nicosia Masterplan, the bi-communal project that began way back in 1979, aimed at bringing the two communities of Nicosia together, working for an improved city. Having conducted a detailed assessment of the city’s structure the project developed a long-term plan and this meant money was available to restore traditional houses in the centre of Nicosia.

It’s not quite the same for places beyond the city walls. Take Ayios Dometios which was once a village outside Nicosia. Homes more than 100 and 120 years old there are in desperate need of restoration.  Heavy rains this winter only added to their delicate state. House after house is caving in.

“It is sad they are letting the houses fall down, they will probably build blocks of flats in their place, which unlike the old houses have no architectural, aesthetic or environmental value,” a concerned resident of Ayios Dometios said.

“People go on about their heritage but they don’t give a damn about our architectural heritage. I think all residents should walk around their neighbourhoods and ask themselves: Is this is what I want?”

“There is simply no money, there is no budget to preserve the buildings,” Maro Christou from the Ayios Dometios municipality told the Sunday Mail. “We try to persuade the owners to list the houses but they don’t respond.”

What the municipality does is check the buildings for safety, and when they are deemed unsafe they are often simply demolished, a method which, instead of saving the neighbourhoods, ensures more room is made for the construction of high rise buildings on the then empty plots.

The municipality said they cannot themselves point out which buildings should be listed and this must be done by the owners.

The Cyprus Scientific and Technical Chamber (Etek) says this is not the case.

Myrto Voreakou, architect and scientific officer at Etek, said that according to the town planning department the listing of buildings does not require the application or consent of the owner,

“In this case, the municipality plays an important part, they should know which buildings to preserve in order to keep the identity of the place,” she pointed out.

She said part of the problem is that are too many departments dealing with architectural heritage.

“There should be an overall body organising this,” Voreakou said, adding there are clearly many buildings which are well worth saving.

According to Etek, the legal framework for listing architectural heritage exists but the way it is implemented has proved to be insufficient.

“This is due mainly to fragmentation of authority between different departments – town planning and housing, antiquities, cultural services, technical services, municipalities –  lack of coordination, absence of an overall strategy for the protection, conservation and regeneration of architectural heritage and limited monetary resources,” a statement from Etek said.

They believe the answer to those problems could be the adoption of a multileveled strategy for the conservation of architectural heritage and the creation of an overall body to delegate authority and coordinate different measures.

Equally important is the implementation of appropriate supervision and authorisation measures with severe consequences for those – including public authorities – who violate the law and damage architectural heritage.

And last but not least: “The development of public awareness on the subject is necessary in order for the communities to realise the value of their architectural heritage for their economic and social development.”

It’s a tall order, and the houses in Ayios Dometios do not have long to wait.

High ideals but lacking in practicalities

Hamilton hunts down Verstappen to win in Hungary

Coronavirus: Another pack of free self-tests for jabbed from January 25