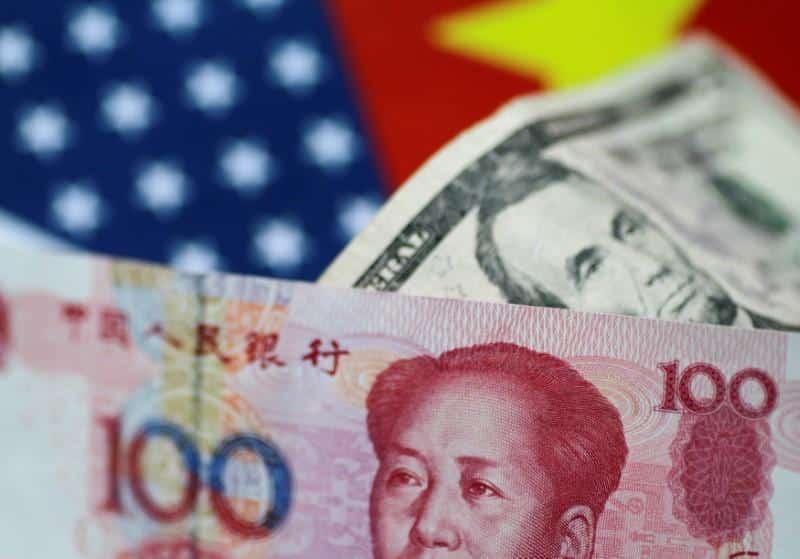 Illustration photo of US Dollar and China Yuan notes

By Andrew Galbraith and Winni Zhou

China let the yuan weaken past the key 7-per-dollar level on Monday for the first time in more than a decade and later said it would stop buying U.S. agricultural products, inflaming a worsening trade war with the United States.

The sharp 1.4% drop in the yuan comes days after U.S. President Donald Trump stunned financial markets by vowing to impose 10% tariffs on the remaining $300 billion of Chinese imports from Sept. 1, abruptly breaking a brief ceasefire in a bruising trade war that has disrupted global supply chains and slowed growth.

Trump on Monday accused Beijing on Twitter of manipulating its yuan currency.

“China dropped the price of their currency to an almost a historic low. It’s called ‘currency manipulation.’ Are you listening Federal Reserve? This is a major violation which will greatly weaken China over time!” Trump tweeted.

Trump did not reveal any specific U.S. response. Some analysts said the yuan move could unleash a dangerous new front in the trade hostilities – a currency war.

After Trump spoke, China’s Commerce Ministry said Chinese companies have stopped buying U.S. agricultural products, and that China will not rule out imposing import tariffs on U.S. farm products that were bought after Aug. 3.

The yuan’s sharp slide sent a shiver through global financial markets. In China, the benchmark Shanghai Composite Index lost 1.62% for its weakest close since Feb. 22, and stock market losses spread rapidly around the world. MSCI’s main measure of global stock performance was down 2%, its biggest drop since February 2018.

On Wall Street, the S&P 500 Index tumbled 2.8% and the Nasdaq Composite slid 3.4%, the largest daily losses since last December. The moves were emblematic of volatility that beset markets in May when tensions between the two superpowers flared up after China reneged on key elements of a deal that was then seen coming together.

The People’s Bank of China (PBOC) provided the early impetus for yuan bears by setting a daily rate for the currency at its weakest level in eight months, weakening a long defense that kept the yuan stronger than 7 to the dollar.

The move was made with the blessing of policymakers to factor in market concerns around the Sino-U.S. trade war and its effect on China’s weakening economic growth, three people with knowledge of Chinese monetary deliberations told Reuters

PBOC Governor Yi Gang, who has been a key player in U.S.-China trade negotiations, said in a statement posted to the bank’s website that the yuan was now at an appropriate level given China’s economic fundamentals. He said that China would not engage in a competitive devaluation and would maintain the stability and continuity of foreign exchange management policies.

In an earlier statement, the PBOC linked the yuan’s weakness to the fallout from the trade war, but said it would not change its currency policy and that two-way fluctuations in the yuan’s value are normal.

Some analysts said China had been propping up the yuan to avoid derailing trade negotiations with Washington, but with tensions escalating, currency may be added to Beijing’s trade war arsenal.

“The fact that they have now stopped defending 7.00 against the dollar suggests that they have all but abandoned hopes for a trade deal with the U.S.,” said Capital Economics Senior China Economist Julian Evans-Pritchard

The central bank set the yuan’s daily midpoint at 6.9225 per dollar before the market open, its weakest level since Dec. 3, 2018.

The onshore yuan finished the domestic session at 7.0352 per dollar, its weakest level since March 2008. Monday marked the first time the yuan had breached the 7-per-dollar level since May 9, 2008.

With the escalating trade war giving Beijing fewer reasons to maintain yuan stability, some analysts said they expect the currency to continue to weaken further to as low as 7.3 to the dollar.

Indeed, the flare-up in trade tensions has renewed global financial market concerns over how much China will allow the yuan to weaken to offset heavier pressure on its exporters.

“It appears the Chinese authorities no longer see the need to limit the tools at their disposal and that the currency is now also considered part of the arsenal to be drawn upon,” Rob Carnell, chief economist and head of research, Asia Pacific at ING, said in a note.

Analysts have previously said that authorities will keep depreciation in check due to concerns about potential capital outflows.

Despite slowing economic growth over the past year amid the intensifying trade war, China has not seen a rush of capital flight, thanks to capital controls put in place during the last economic downturn and growing foreign inflows into Chinese stocks and bonds.

In 2015, China stunned global financial markets by devaluing the yuan 2% as its economy slowed. It burned through $1 trillion in foreign exchange reserves to steady it.

China soymeal futures rose more than 2% and Dalian iron ore futures dropped, hitting their weakest level since July, while London copper slumped to its lowest in over two years.