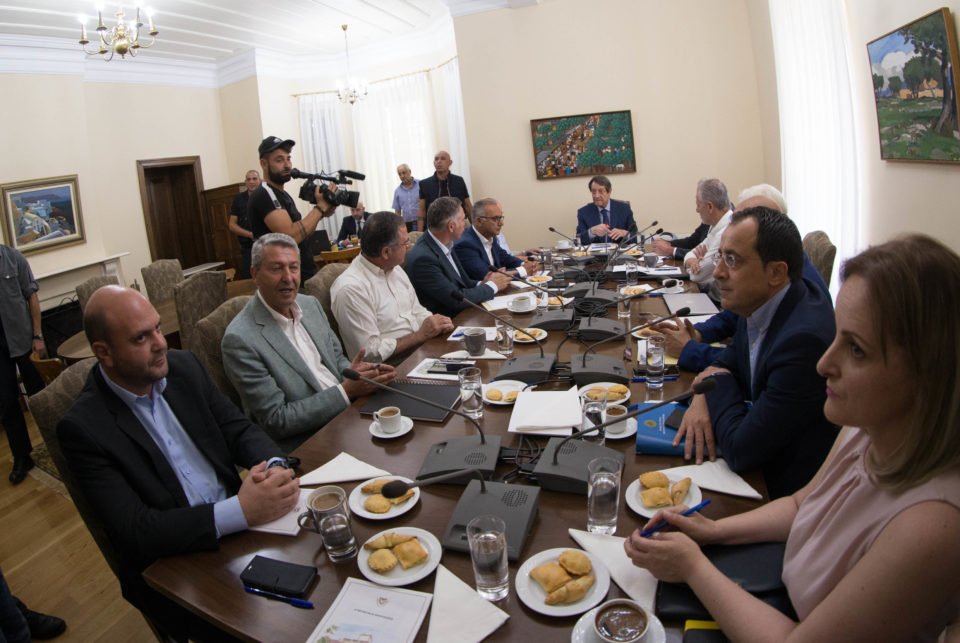 Varosha and gas, and the Turkish side’s ‘willingness’ to discuss options other than a bizonal, bicommunal federation, appeared on Monday to be the main bones of contention that could scupper a crucial leaders’ meeting on Friday.

Though the government remained non-committal on Monday over what it expected from the leaders’ meeting, both Turkish Foreign Minister Mevlut Cavusoglu and Turkish Cypriot leader Mustafa Akinci were open about their expectations.

Similarly, Greek Cypriot party leaders, speaking after a three-hour meeting with President Nicos Anastasiades at the presidential Troodos residence, were vocal about Turkish Cypriot plans to open Varosha, and Akinci’s proposal for a joint hydrocarbons committee, something they have already unanimously rejected. They said the meeting with the president was constructive and each party had submitted their own proposals. No one was optimistic over the talks, other than Akel’s Andros Kpyrianou who was only able to “hope” that the leaders would make the effort to try and create a more positive climate.

What appeared to become lost in the rhetoric, however, was the reason for the leaders’ meeting, which is to determine common ground for a resumption of talks leading to a new conference on Cyprus and hammer out a bizonal, bicommunal federation.

Hydrocarbons and the contentious situation on Varosha, coupled with Turkey seeking a new basis for negotiations, are more than likely to get in the way.

“We also don’t impose any solution model. We negotiate in a result-oriented framework but there is no benefit in starting a new process for the sake of negotiating alone,” he said at an ambassadors’ conference in the Turkish capital.

“The constructive [gas] proposals submitted by the Turkish Cypriot authorities with good intentions should have been appreciated,” he added, going on to say that Cyprus was “a national cause” for Turkey.

“The equality and security of the Turkish Cypriot people are indispensable. We will not allow steps that ignore the legitimate rights and the interests of Turkey and the Turkish Cypriots in the Eastern Mediterranean… our message to everyone interested in the region is the same. If you cooperate with us, everyone wins.”

Akinci told Turkish Cypriot newspaper Kibris the Cyprus talks had now gone into “extra time” and if what he called the rights of the Turkish Cypriots were not given, a non-solution would become permanent.  “We are going [to the meeting] with an open agenda,” he said but added that the meeting would be decisive for the future of the negotiations.

The essence for him on Friday would be the natural gas issue, and more confidence-building measures and the target was a road map that would lead to a new five-party conference.

“We want a federation. If what we make will be a federation, we will learn to share the authority, the powers and the wealth. On August 9 we will see how the situation is,” he said. “To put it in another way, the game is over and the extra time is being played.”

By comparison on Monday, the Greek Cypriot leadership was keeping its cards close to its chest. Government spokesman Prodromos Prodromou said Anastasiades was seeking a “creative” meeting with Akinci to created conditions for the resumption of talks on the basis of UN resolutions and the parameters set by the secretary-general in Crans-Montana in July 2017.

He did not want to pre-judge the discussions by talking about gas, and as far as Varosha was concerned “the positions of our side are known,” he said.

“We remain focused in the president’s pursuit for a creative meeting with the Turkish Cypriot leader in a bid to create in general the necessary conditions for the resumption of negotiations,” Prodromou said.

Solidarity leader Eleni Theocharous said if Turkish Cypriots wanted to co-manage the hydrocarbons “let them come join the Republic of Cyprus”. She wished for a positive outcome to the leaders’ meeting but given the situation concerning Turkish drilling in the island’s exclusive economic zone, she was not overly optimistic.

Citizens Alliance leader Giorgos Lillikas said the chances of a positive outcome were very small. He said the leaders needed to focus on a resumption of talks because without common ground another failed Cyprus conference “would be the final nail” and, quoting Cavusoglu, would allow Turkey to promote new solution models.

Diko leader Nicolas Papadopoulos said under no circumstances should the Greek Cypriot side engage in gas co-management talks, “which seems to be Ankara’s main priority”. He said terms of reference for new talks needed to be agreed “because after every new impasse, things are much worse for us”.

“We have all agreed that the Cyprus problem can only be resolved through negotiations,” he said.  “We expect both leaders to make every effort to slowly build a positive climate that will allow the negotiations to be resumed.”

One of Nicosia’s Citizens’ Service Centre to close