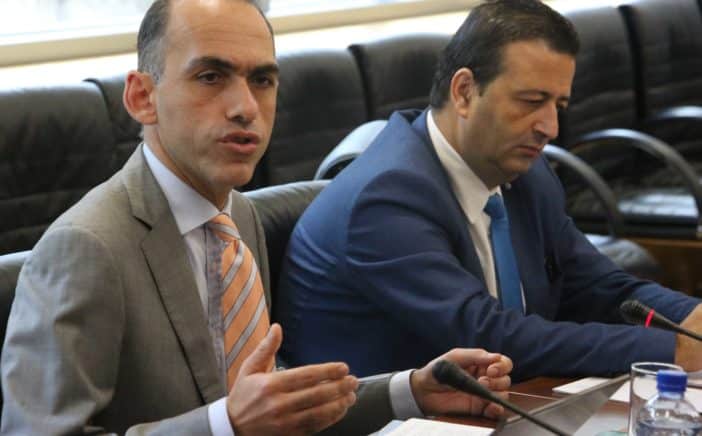 Parliament’s enactment last week of a bill impacting foreclosure procedures was ‘sloppy’, Finance Minister Harris Georgiades said on Monday, hinting that the legislative proposal may be unconstitutional and could be vetoed by the president.

He was alluding to the bill passed by the House that affords borrowers with bad debts the ability to seek recourse with the financial ombudsman who will decide whether a lender had violated the central bank’s code of conduct regarding loan restructuring.

If the ombudsman decides there is a violation, the borrower can then seek a court injunction halting the repossession procedure.

According to the MPs who supported it, the bill is intended to introduce additional safeguards for homeowners with mortgages they are unable to service and to restore the negotiating balance between lenders and borrowers.

But speaking to the public broadcaster on Monday, the finance minister censured MPs for not having heeded his calls to wait for the European Central Bank’s (ECB) feedback on the bill.

“Decisions on delicate banking matters cannot be taken in such a sloppy and rushed way. The proposal [the bill] was drawn up on Thursday and voted on the very next day. This is not the way to go about legislative business,” Georgiades said.

He also stressed that, as a member of the Eurosystem, Cyprus is obligated to secure an opinion from the ECB prior to enacting legislation that potentially affects banking stability – like making it harder on lenders to recover loans.

“In this case, we did not meet our European obligations,” he noted.

The bill may not pass muster with European banking authorities for another reason: it gives the financial ombudsman in Cyprus, an independent agency, a say in the affairs of another independent authority – the central bank.

“Is this permissible? Here we have not taken into account the opinion of the Central Bank of Cyprus or the European Central Bank.”

Georgiades said the optimal solution would be for the Central Bank of Cyprus itself to set up a complaints mechanism targeted at borrowers who feel unfairly treated by their bank – for example where a bank does not exhaust all options to restructure a loan before sending the borrower a foreclosure notice.

The minister reiterated that parliament’s bill – although an improvement on an earlier legislative proposal which MPs agreed to withdraw – would drag out repossessions proceedings, to the detriment of banks and borrowers alike.

Moreover, the bill does not provide for income and asset criteria for those wishing to take recourse with the financial ombudsman – meaning that indebted millionaires benefit the same as the man on the street.

“So can this be considered protecting ‘vulnerable’ homeowners, as the parties say?”

Georgiades again criticised MPs for disregarding government appeals that they postpone fiddling with foreclosures legislation until the ‘Estia’ debt relief scheme for homeowners kicked in.

‘Estia’ is due to go live at the beginning of September.

Responding to a question, the minister dismissed allegations that commercial banks are disregarding guidelines regarding loan restructurings and are moving straight to repossessing properties.

Citing data, he said that over the past few years around 80 per cent of loan restructurings have been found to be sustainable.

The question now is whether President Nicos Anastasiades will refuse to sign off on the bill and send it back to parliament.

If he does, and parliament refuses to withdraw the item, the matter would end up with the supreme court.  But it could take months until the court delivers a final decision. In the interim, the uncertainty over the heft of foreclosures legislation could adversely affect banks, who may be required to raise their capital provisions as a buffer against weaker recovery of non-performing loans.

Media reports suggest that, knowing this, the president may decide not to veto the bill after all. Rather, the government would instruct the central bank to proceed with setting up a mechanism for vulnerable borrowers and ask for the ECB’s nod.

Paying tribute to the Rocketman