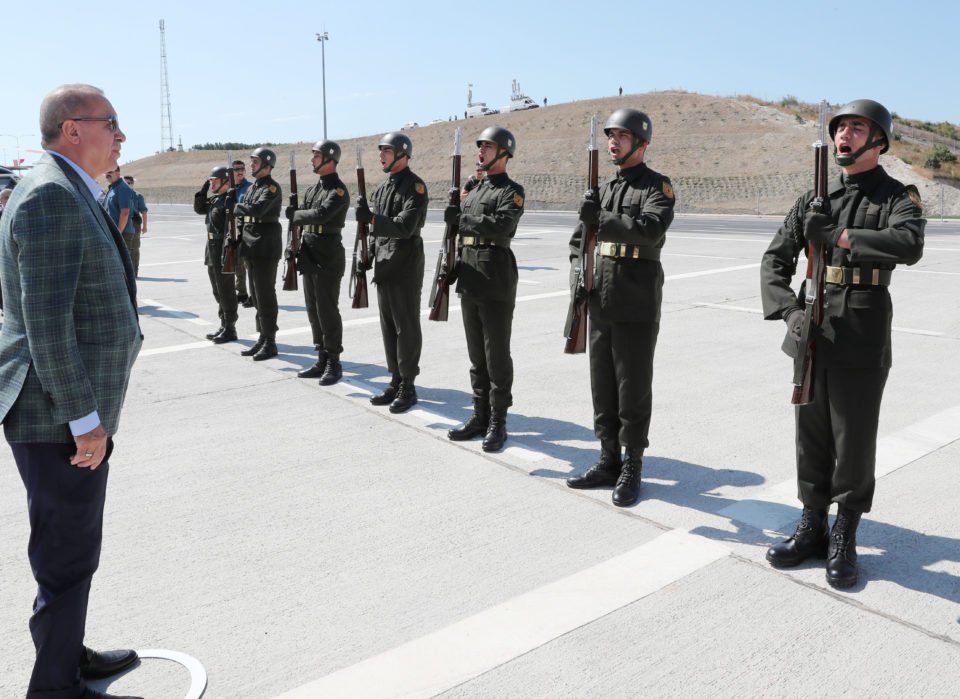 Turkish President Tayyip Erdogan reviews a guard of honour at the airport in Bursa, Turkey

Deep differences between Turkey and the United States over the scope and command of a planned “safe zone” in northeast Syria raise the prospect of Turkish military action unless the two countries break months of deadlock in talks this week.

Turkey has twice sent troops into northern Syria in the last three years and President Tayyip Erdogan said on Sunday a third incursion was imminent, targeting Kurdish-controlled territory east of the Euphrates river.

Ankara views the Kurdish YPG militia, which plays a leading role in the Syrian Democratic Forces that hold sway over hundreds of miles (km) of Syria’s northeast border region, as terrorists who pose a grave security threat to Turkey, saying they must be driven back from frontier areas.

Washington, which armed and backed them in the fight against Islamic State in Syria, wants to protect its military partners and has resisted Turkey’s demands for full control of a long strip of land that would extend 32 km (20 miles) into Syria.

Military delegations from both countries are meeting in Ankara this week, the latest attempt in months of talks on setting up the safe zone which they agreed to form as President Donald Trump’s administration reduces troop numbers in Syria.

Three Turkish officials who spoke to Reuters expressed impatience that the talks have yet to yield results, and warned that Ankara was ready to act on its own.

“For some time, Turkey’s armed forces have deployed on the Syrian border. All the necessary preparations for an operation are complete,” a senior Turkish official said.

“If we have to do this business on our own, we will. Of course the sensitivities of the countries with which we cooperate are important but they finally have to understand us. Every passing day is a loss.”

The safe zone impasse is just one of several disputes between the two NATO partners. Turkey angered the United States last month by buying Russian missile defence equipment, and the two countries are also split over Washington’s Iran sanctions and refusal to extradite a Muslim cleric wanted by Ankara.

Both sides have made their frustration clear.

Trump’s special envoy for Syria said after an earlier round of talks on the safe zone last week that Turkey had taken a “pretty tough” position. “The Turks want a deeper zone than the one we think makes sense,” James Jeffrey said.

Washington has proposed a two-tiered zone, with a 5-kilometre (three-mile) demilitarised strip bolstered by an additional 9 km cleared of heavy weapons – stretching in total less than half the distance into Syria that Turkey is seeking.

The United States has sought, with little sign of success, military contributions from European allies to police the area.

Turkey has said it must have ultimate authority over the safe zone, another point of divergence with the United States.

“When Ankara says it wants to control the 32-km zone, the United States can never agree to that,” said Aaron Stein, director of the Middle East program at the U.S. think-tank Foreign Policy Research Institute.

Given that negotiations had “flatlined,” he said Turkey was likely to act unilaterally and pointed to several potential military targets including areas around the northern Syrian town of Manbij and the border towns of Tel Abyad or Kobane.

U.S. forces operate to varying degrees in all three areas, meaning American troops could risk being caught up in hostilities if Turkey does take action.

U.S. Defense Secretary Mark Esper said on Tuesday any Turkish operation into north Syria would be “unacceptable” and the United States would prevent unilateral incursions. He said he hoped this week’s talks in Ankara would succeed.

A Turkish security official said that differences between the two sides over the depth of the zone were narrowing but had not been completely bridged.

“(The United States) reached a point close to our proposal but a full agreement could not be reached,” he said, adding that Turkey insisted on the full 32 kilometres, as Trump himself endorsed in a January tweet.

“Fundamentally we want what Trump said to be implemented. It is not normal for talks to go on this long,” he said.

While Turkish officials are keen not to alienate the president, who has been far more sympathetic about Turkey’s purchase of the Russian defence systems than the U.S. Congress, Erdogan repeated on Tuesday that Ankara was committed to clearing Kurdish fighters from its southern flank.

“Turkey cannot feel safe as long as this structure along our southern border, which is growing like a cancer, is not eliminated,” he told Turkish diplomats in Ankara.

“If we don’t do what is necessary today, we will have to do so by paying a high price later,” Erdogan said, signalling a new operation into Syria after the 2016 Euphrates Shield incursion and last year’s Olive Branch operation to drive Kurdish YPG fighters from the northern Syrian region of Afrin.

“God willing, we will take the process we started with the Euphrates Shield to a very different level very soon,” he said.