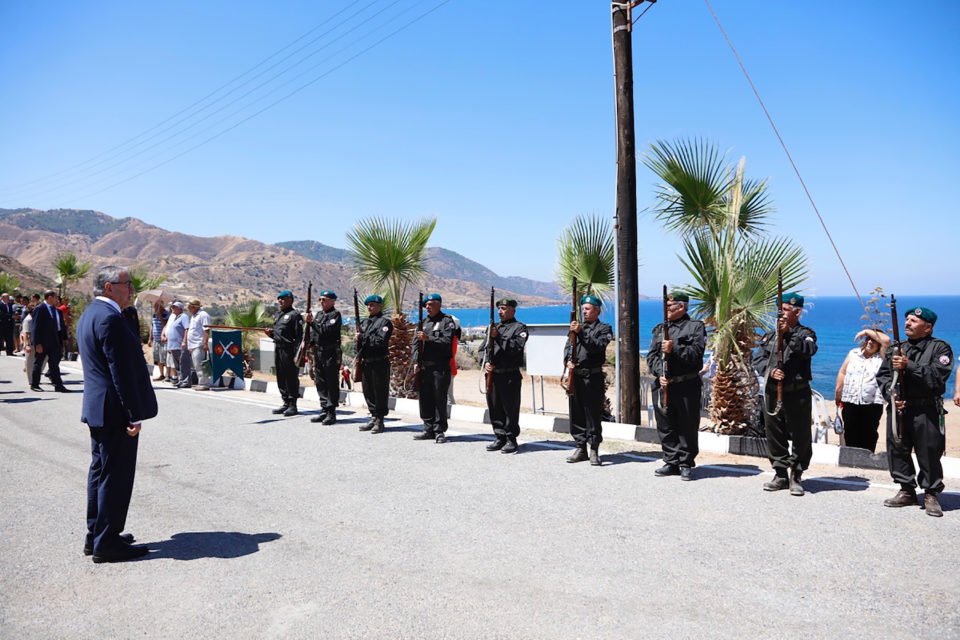 Turkey’s “good will” on the hydrocarbon issue should not be perceived as weakness, the country’s Defence Minister Hulusi Akar, said on Thursday.

“Our goodwill should not be considered as weakness, our power should not be tested.. the price to be paid would be very heavy,” Akar said at the annual event to mark the 55th anniversary of the Turkish bombardment of Tylliria in August 1964.

Following the outbreak of intercommunal violence in December 1963, Turkish Cypriots had established a bridgehead at Kokkina in 1964, used to supply arms, volunteers and materials from Turkey.

Seeing the incursion as a major threat, the Cypriot government launched an attack leading to the Turkish retaliation. It only ended after an UN-backed ceasefire was called.

Turkey responded by bombing the area with its air force.

Close to 1,000 Turkish Cypriots crossed from the north in buses through the Limnitis checkpoint on Thursday to take part in the event at the Kokkina enclave to mark the anniversary. Others travelled to the enclave by boat, and officials by helicopter, Akar among them.

He said Turkey wanted to find a solution to the hydrocarbons issue and to disputes with Greece in the Aegean with peaceful means, “respecting international law”.

Ankara has sent two drillships to Cyprus exclusive economic zone in recent months despite calls from the EU not to do so, and calls from other international players for the issue to be resolved.

“The Turkish Republic and TRNC have shown until so far and on every occasion that they are in favour of peace and stability and thus they have done all that is necessary,” Akar said.

He said Turkish Cypriot leader Mustafa Akinci had offered a solution by suggesting a joint committee to manage hydrocarbons “but still, the Greek Cypriot side rejected it”.

“In spite of these developments, Turkey will continue protecting its equal and sovereign rights in the Eastern Mediterranean and the Aegean and the fair sharing of the natural gas resources and it supports their distribution with a fair agreement between all country shareholders,” said Akar.

Turkey, he said, would continue drilling activities in the areas it claims as its continental shelf “and in the areas licensed by the TRNC”.

Then he called on Greece and Cyprus to act in line with international law and “good neighbourhood principles, as we do so far”.

“Working together with mutual respect and cooperation with the newly established government in Greece, we would be able to overcome all problems in the Aegean, the Eastern Mediterranean and Cyprus,” Akar said, adding that Turkey efforts were directed at a “comprehensive, fair and viable solution in Cyprus that would be based on bi-zonality, bi-communality and political equality, would bring peace, tranquillity and stability in the island”.

“We extend a peace hand and we expect a response.”

Turkey was also the “strongest guarantee for the security, stability and peace in the region” and would continue “protecting its own and the TRNC’s legal rights and interests”.

“Any efforts to seize our rights with fait accompli cannot be overlooked. This rhetoric and determination should be well understood. We, on the one hand, demand all problems to be solved with goodwill and in a friendly manner, but we do not want this to be perceived as a weakness by the other side. I want to express that the goodwill we show should never be considered as a weakness, our strength should not be tested, because the price for this would be very heavy,” he said.

Akinci, in his comments, said the recent history of Cyprus was full of blood, tears and pain and that lessons should be learnt from past sufferings.

In the government-controlled areas, Greek Cypriot parties condemned the celebration of events “honouring acts of violence and killing”, the Citizens Alliance said. “The tragic events in Tillirya and the surrounding area showed us the true face of Turkey,” Solidarity said. “Dozens of Greek Cypriots, mostly civilians, were deprived of their lives,” it added.