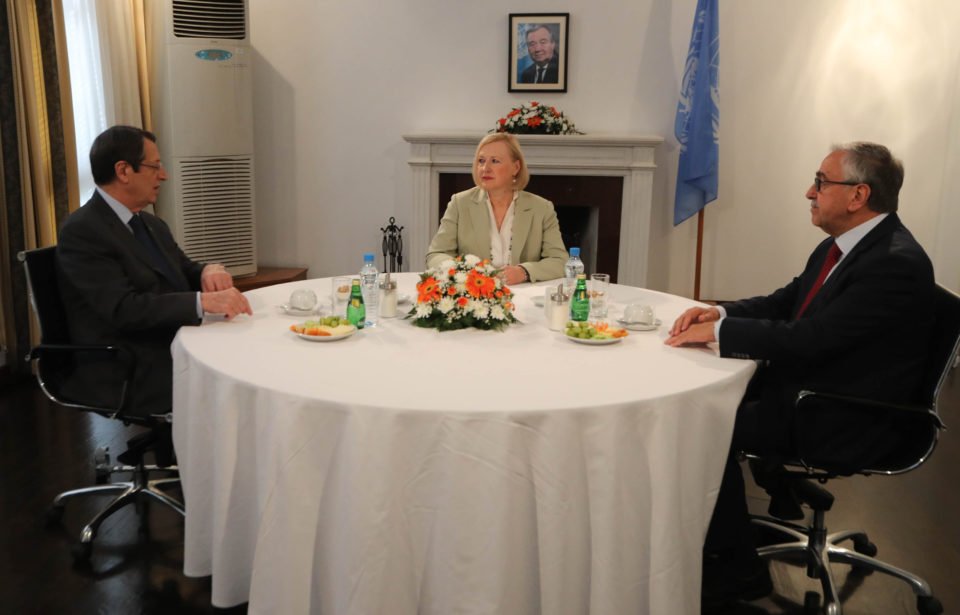 The two leaders with Elizabeth Spehar on Friday

The leaders of the island’s divided communities agreed Friday to pursue efforts to restart reunification talks but failed to find common ground on gas exploitation, which has become a major sticking point.

In their first meeting since February, President Nicos Anastasiades and Turkish Cypriot leader Mustafa Akinci said they had a constructive exchange of views and would continue to work with UN envoy Jane Holl Lute on the terms of reference that would kick-start a new round of negotiations.

“They decided to continue engaging in the efforts undertaken … with the determination to finalise the terms of reference that would enable structured and results-oriented negotiations leading to a settlement with a sense of urgency,” a UN statement issued on behalf of the leaders said following talks of almost three hours.

Added to the Cyprus problem woes is the issue of the island’s natural gas reserves with Turkey disputing the Republic’s right to explore for gas and Turkish Cypriots demanding a say and a share in the endeavour.

Ankara says that areas Cyprus claims encroach on its own continental shelf and that in other cases Turkish Cypriots are entitled to a share of the resources.

It has dispatched two drill vessels to conduct operations east and west of Cyprus. The move prompted the EU to suspend talks with Turkey on a comprehensive air transport agreement and to freeze any high-level dialogue with Ankara.

Akinci has tabled a proposal to form a joint committee, which was rejected by the Greek Cypriot side.

Anastasiades said after the meeting that they discussed the matter on Friday, adding that he made a counter proposal that would create a sense of security among the two communities as regards the benefits that would arise from the exercise of the Republic’s sovereign rights in its own exclusive economic zone (EEZ).

“I first raised Turkey’s illegal actions, which challenge the convergences achieved between the two communities that provide that the sea area of the Republic of Cyprus must be in line with the law of the sea […] and not what Turkey defines,” he said.

Anastasiades also said he argued why Akinci’s proposal on a joint committee on natural resources cannot be accepted.

“Only sovereign states can grant licences or make decisions about their exclusive economic zones,” he said.

During the meeting, Anastasiades said he was prepared to provide additional assurances in a bid to allay Turkish Cypriot concerns.

Akinci confirmed afterwards that he had received a counter-proposal, and although still unofficial, it appeared to fall short of the Turkish Cypriot side’s expectations.

“We do not think a proposal to exchange information only will solve the problem. Mr Anastasiades promised to give us their thoughts on the matter in writing. However, I can say that … this proposal is not a breakthrough,” Akinci said.

The Turkish Cypriot leader insisted that his proposal for a joint committee did not breach the convergences achieved in the part as the Greek Cypriot side argued.

The disagreement over gas appears to hamper moves on Varosha, the town its Greek Cypriot inhabitants abandoned in August 1974 ahead of the advancing Turkish army. The town has been fenced-off and held by the Turkish side as a bargaining chip since.

The issue was discussed by the leaders on Friday, with Turkish Cypriots rejecting a Greek Cypriot proposal for the creation of a joint committee on Varosha.

“If we had seen a serious approach on the issue of hydrocarbons, we could have developed different thoughts. However, due to the approach we saw, we could not have discussed an initiative (on Varosha. Unfortunately, both matters are at a point where joint moves cannot be made,” Akinci said.

The leaders did agree to hold a tripartite meeting with the UN Secretary-General in September to plan a way forward to resume talks.

Reports after the meeting said Anastasiades had tabled a proposal relating to the terms of reference, aiming at speeding up the procedure.

The president told Akinci that negotiations can start immediately on the basis of the February 11, 2014 joint declaration, the convergences that led to the conference in Switzerland, and the six UN parameters tabled in July 2017.

Overall, he said, “what we have concluded as regards the substance of the Cyprus problem is that the prospects and conditions are being created to continue cooperation with Ms Lute to configure the terms of reference despite important differences on some issues” so that there can be a meeting between the two leaders and Mr Guterres to see how to proceed with the aim beginning talks for the solution.

Akinci said the two sides now had a roadmap ahead of their meeting with the UNSG.

“The meeting with the UNSG will certainly be important because an effort will be made there to draw a roadmap for later. And as far as what we can foresee, it could lead to an informal even, five-party meeting.”

Akinci did not rule out discussing Anastasiades’ idea of a decentralised federal system as a form of solution in detail provided there was an agreement on past convergences, February 11, 2014, the UNSG framework of June 30, 2017, without changes.