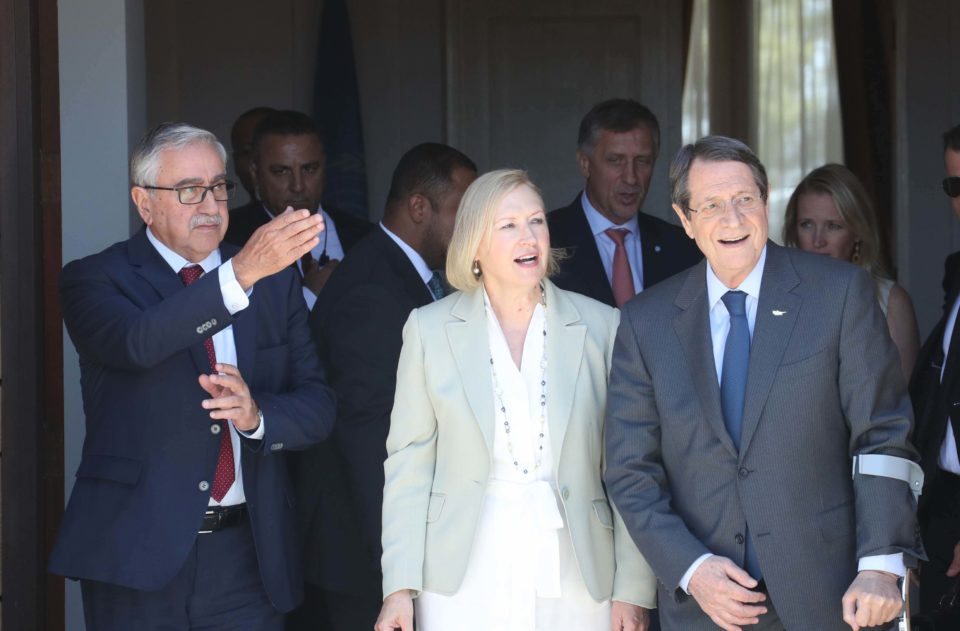 The leader' meeting on Friday

President Nicos Anastasiades is expected to send a non-paper to Turkish Cypriot leader Mustafa Akinci, containing his counterproposals on the issue of natural gas, the main sticking point during the informal meeting held on Friday.

“We are talking about a non-paper, we are not talking about a proposal,” a government source told CNA, adding that its contents will be in line with the letter sent by Anastasiades to the UN Secretary-General on July 22.

After the meeting of the two leaders on Friday at the residence of UN Special Representative Elizabeth Spehar, their first meeting since February, Akinci said they had a constructive exchange of views on ways to kick-start a new round of negotiations, and that Anastasiades promised to give in writing his ideas about the issue of natural gas.

After the rejection of the proposal submitted by Akinci for the formation of a joint committee for the management of natural gas, Anastasiades said that at Friday’s meeting a counterproposal was submitted that would create a sense of security among the two communities as regards the benefits that would arise from the exercise of the Republic’s sovereign rights in its own exclusive economic zone (EEZ).

Akinci confirmed later on Friday that he had received a counterproposal, and although still unofficial, it appeared to fall short of the Turkish Cypriot side’s expectations.

“We do not think a proposal to exchange information only will solve the problem. Mr Anastasiades promised to give us their thoughts on the matter in writing. However, I can say that…this proposal is not a breakthrough,” Akinci had said.

The source speaking to CNA said that by promising to inform Akinci about natural gas decisions, Anastasiades was displaying goodwill, while keeping a clear distance from the joint administration of natural resources that the Turkish Cypriot side requests.

The same source also referred to the concrete proposal Anastasiades submitted on Friday regarding the terms of reference, noting that the convergences which led to the Crans-Montana conference in the summer of 2017, also cover natural gas issues, such as the agreement about the share for Turkish Cypriots and the acceptance of the UN Convention on the Law of the Sea.

The Turkish Cypriot side, however, insists that his proposal for a joint committee did not breach the convergences achieved in the part as the Greek Cypriot side argued.

Anastasiades’ proposal on the terms of reference seems to encounter no opposition from the Turkish Cypriot side, the source continued, and expressed the expectation that this will be also ascertained during UN envoy Jane Holl Lute’s next visit to Cyprus.

Meanwhile, UN Secretary-General Antonio Guterres responded to Akinci’s letter setting out his gas proposal, saying he noted it and appreciated the effort, and that he believed the need to resolve the hydrocarbons issue was a strong incentive to achieve a Cyprus solution.