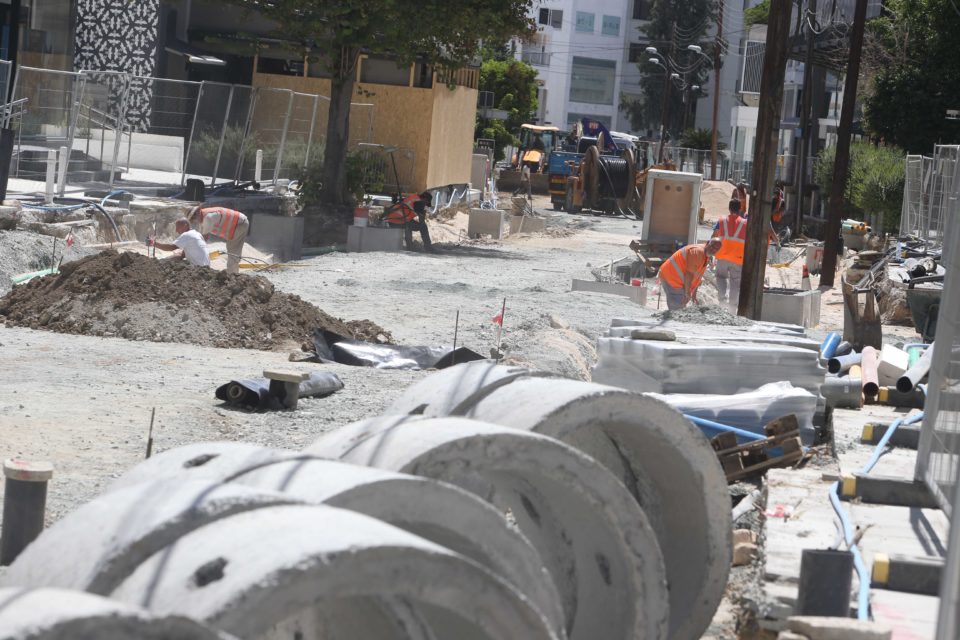 Works are due to be completed early next year

Shop owners in the upmarket part of the Nicosia centre that has been undergoing a major redevelopment since last September said this week they have seen business drop between 50 and 80 per cent.

They acknowledge that the finished product will upgrade the recently neglected city centre and benefit businesses in the long term, but some shop owners fear they will not last long enough to reap the rewards.

Works on the redevelopment of Nicosia’s ‘commercial triangle’ that comprises the conjunction of Makarios Avenue, Evagoras and Stasikratous streets and around 13 side streets, started last September and are expected to be completed by the beginning of 2020, according to the municipality.

The aim of the project, which is being financed by the EU Cohesion Fund, the state budget and the Nicosia municipality, is to make the urban shopping centre competitive, attractive and environmentally friendly.

But in the meantime, area shop owners say they have seen their business plunge. Some were even forced to close shop or relocate as they could not cope financially.

For others, like a clothes shop owner on Mnasiadou street, who has been there for over 30 years, this is not an option.

“We have our clientele, they know where to find us, it is not easy to relocate,” the shop owner, who did not want to be identified, told the Sunday Mail.

She said work outside her shop has been ongoing for almost a year and her business has dropped by half, while rent and operational expenses remained the same.

The exemption from refuse and professional taxes the municipality has introduced for affected businesses is not enough to counter the loss, she said.

Several shops have closed in the area, she said.

Another shop owner on Zenas de Tyras street said he has seen his business drop by 80 per cent.

“Works started on September 3 but they did not tell us when they would be completed,” he said. “All we know is that the project would last 16 months.”

He said that even though they had been told works would be carried out in phases, the entire area is a construction site.

“When one part is completed, they still don’t open it up to the public,” he said, giving as an example the area where his shop is located. Although the granite paving has been completed, the contractor is still waiting for the material to arrive to paint over the stones so that they do not stain.

“Couldn’t they have foreseen this?” he asked.

He said works are being delayed for a number of reasons and cited lack of proper planning.

His business has survived because it owns the building, he said, but they are still facing challenges and are trying to reduce operational costs to cope.

The works outside the shop have meant he has not been able to receive any merchandise since last January as delivery lorries cannot get close.

Due to lack of bins nearby he is forced to take the shop’s rubbish home with him.

“The only positive is it will be something nice once it is completed,” he said, conceding that those who survive will benefit from the redevelopment.

Another shop owner further down the same street agreed that the end result will boost business “but the cost we will bear is enormous.” Business since last September simply died, he said.

Both shop owners said the problem faced by visitors in accessing the area had led many to opt to shop elsewhere such as the area’s most-feared competitors, the malls.

Another shop owner on Stasikratous avenue, said although there is access to the shops, not many know about this.

“People do not come here anymore because they think there is no access,” she said.

She is among the more fortunate business owners since works outside her shop started only last month and seem to be progressing fast, she says.

She too agrees that the redevelopment was necessary.

“All other cities had seen development, Nicosia was lagging,” she said. “It is nice to have this redevelopment.”

Nicosia municipality’s spokesman Makis Nicolaides said the revamp would yield benefits to the shop owners and the area in general but inconvenience was inevitable.

Works include upgrading water, electricity and telecommunications infrastructure but also making provisions to introduce the smart city project, he said, referring to Nicosia’s plans to become the first integrated smart city in Cyprus.

“The redevelopment project is in three phases to avoid inconvenience,” he said.

He added that every completed part will be given to the public, but only after safety is ensured.

Nicolaides said that the whole project is expected to be completed within the first three months of 2020.

Aside minor delays due to the bad weather conditions experienced earlier in the year, he said, the project is progressing.

He said all streets will be paved and accessible to vehicles, while more than 330 tall, mature trees will be planted to help reduce high temperatures and provide shade.

Planting the trees follows the principles of bioclimatic planning that helps increase the time pedestrians can move outside during hot weather.

The municipality says the project is important to its growth strategy. It adopted high criteria for sustainable urban planning aimed at increasing mobility in the Nicosia urban area, facilitating access of pedestrians and the disabled, and increasing visitors by creating wide sidewalks.

“In the end, this present inconvenience will be rewarded,” Nicolaides said.

Our View: Clerides has been a big disappointment as AG