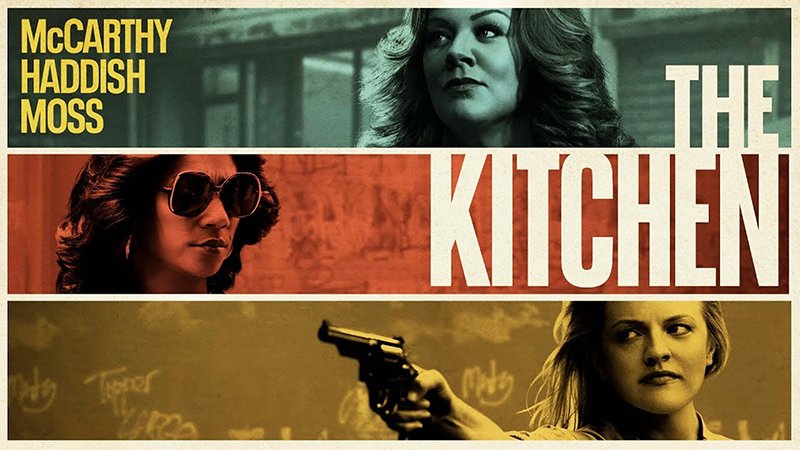 The kitchen is where a woman’s place is. The kitchen is also what you should stay out of, if you can’t stand the heat. Both those phrases are appropriate to The Kitchen – but in fact the title refers to Hell’s Kitchen, a rough New York area traditionally home to working-class Irish-Americans. Nowadays of course it’s been gentrified, like all of Manhattan – but the film takes place in the 70s, when the streets were still gritty, and the period setting is relevant in another way too: this was a time when a woman faced harassment in the street (random guys calling “Hey baby!”) and possible abuse at home.

That’s the point of this scrappy crime drama, a comic-book version of Widows (actually based on a series of comic books) – a worm-that-turns narrative about a trio of women, ignored at best and downright battered at worst, who decide to turn gangster after their gangster husbands (and providers) end up in jail. Melissa McCarthy is Kathy, the housewife and mother who thoughtfully bakes cookies for their meeting with Little Jackie, the local kingpin who claims he’ll look after them (but doesn’t). Tiffany Haddish is Ruby, never accepted by her husband’s family because of her skin colour. Elisabeth Moss is Claire, a cowed victim who’ll “just take whatever they give me” – but soon discovers her inner badass, not to say psychotic murderer.

That “Hey baby!” guy quickly learns to respect women, ditto Little Jackie and the rest of the mob. “If we have a dick-measuring contest, I’m gonna win!” laughs Alfonso Coretti (Bill Camp, fast becoming the biggest scene-stealer in Hollywood), the Mafia boss from across the river in Brooklyn – but even he accepts that the three ladies run the Kitchen. The turning of the tables is fun, in a tub-thumping way – but the film isn’t very plausible, even then. Our heroines take over from Jackie in offering protection, getting loadsamoney from local businesses, yet it’s unclear what exactly they can offer. Kathy promises she’ll send her kids over to clean up graffiti on a shopfront; Ruby has a cousin who can help secure a licence for the local beautician. They do hire a couple of goons to provide muscle – but the goons are forced to quit, so why should shop-owners keep paying our heroines, as opposed to the powerful gangsters?

Don’t ask me; all I know is that the girls go from broke and oppressed to queens of the Kitchen in about 20 minutes – at which point the film starts to drag, then stalls altogether. Claire gets together with Gabriel (a colourless Domhnall Gleeson), a cold-blooded killer who teaches her – she proves a willing pupil – how to cut up corpses. Kathy’s disapproving dad turns up, doing variations on ‘This is not how we raised you’. The husbands get out of jail, and aren’t happy to see their formerly docile wives now so powerful (and increasingly ruthless). Writer-director Andrea Berloff ends up offering one stale conversation after another, goosed by an over-active soundtrack that kicks off with ‘This Is a Man’s World’ and piles on the 70s standards.

“Good for you!” declares the Mafia boss’s wife, accosting the ladies (behind her husband’s back, of course) to talk sisterhood and Gloria Steinem. Feminism, needless to say, is the worthy cause being served by this patchy movie – the fact that Ms. Berloff is female is part of the message – but did it have to be so dull? Actually, it’s worse than dull: when a husband punches his wife in the stomach and calls her an ugly name, then the wife pulls a revolver and coolly dispatches her hubby – and a pop song instantly appears on the soundtrack – the ‘Go, girl!’ cartoonishness dumbs down the real problems of real women. There are quite a lot of inconsequential deaths in The Kitchen, minor characters killed without really furthering the plot, the film trying to jog itself (and the audience) out of its stupor with moments of violence. It’s depressingly empty.

How inept is The Kitchen? So inept that it builds to a big twist, the kind that re-fashions the whole narrative, then goes on as if nothing had happened. (Seriously, it makes almost no difference.) I’m probably wrong, given how long projects tend to languish in Hollywood, but this feels like a film that was greenlighted on the back of the #MeToo phenomenon then rushed into production at top speed – even with a half-baked script – before the zeitgeist shifted again. “Times change,” notes no-longer-disapproving Dad at the end. “You do what you gotta do.” He has a point.

Fire extinguished as patrols stepped up