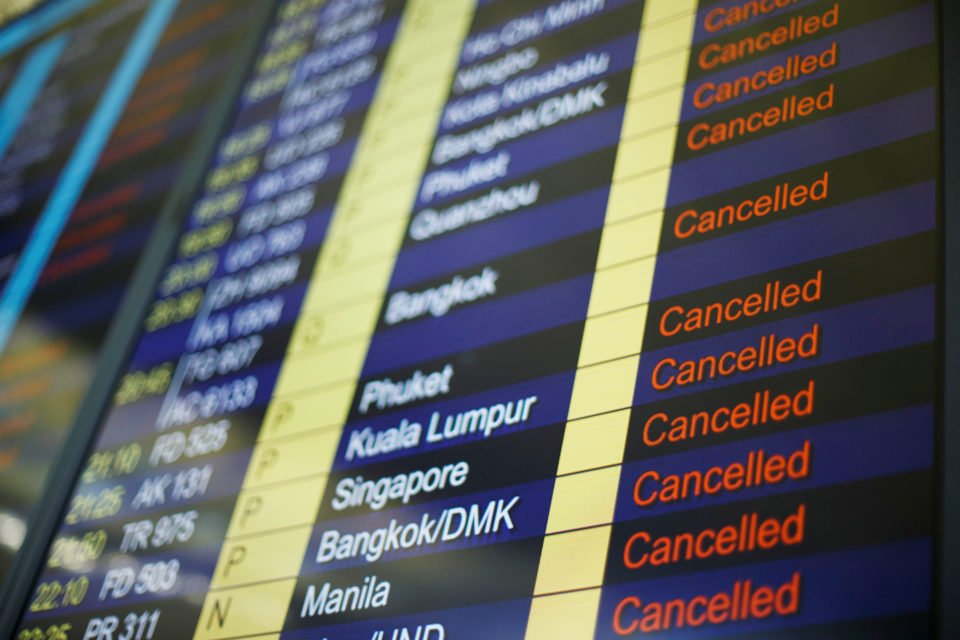 Hong Kong’s airport cancelled all flights on Monday, with authorities blaming demonstrators for the disruption of one of the world’s busiest terminals, a dramatic escalation of anti-government protests that have roiled the Asian financial hub.

At the same time a Chinese official in Beijing warned signs of “terrorism” were emerging. China’s People’s Armed Police also assembled in the neighbouring city of Shenzhen for exercises, the state-backed Global Times newspaper said.

Both moves lift the stakes sharply after a weekend of skirmishes between police and activists, in which both sides appeared to boost their resolve with new tactics.

Some of the 5,000 activists occupying the airport’s arrivals hall for a fourth day went to the departure area and caused disruptions, Hong Kong police told a news conference, but declined to say if they would move to clear the demonstrators.

Traffic to and from the airport was severely affected.

“Airport operations at Hong Kong International Airport have been seriously disrupted … all flights have been cancelled,” the city’s airport authority said in a statement.

“All passengers are advised to leave the terminal buildings as soon as possible.”

Roads to the airport were congested and car parks were full, the authority said.

The increasingly violent protests have plunged the Chinese-ruled territory into its most serious crisis in decades, presenting Chinese leader Xi Jinping with one of his biggest popular challenges since he came to power in 2012.

Monday’s cancellation came as China’s Hong Kong and Macau Affairs office said the city had reached a critical juncture and after police had made a show of demonstrating a powerful water cannon.

The protests began in opposition to a bill allowing extradition to the mainland but have widened to highlight other grievances, drawing broad support.

Over the weekend, as demonstrators threw up barricades across the city, police shot volleys of tear gas into crowded underground train stations for the first time, and fired bean-bag rounds at close range.

Scores of protesters were arrested, sometimes after being beaten with batons and bloodied by police. Police have arrested more than 600 people since the unrest began more than two months ago.

Tear gas was fired at the blackshirted crowds in districts on Hong Kong island, Kowloon and the New Territories, with one young female medic hospitalised after being shot in the right eye, triggering a protest by medical workers.

At the airport, thousands of activists have occupied the arrivals hall for days.

Wearing black, the mostly young protesters have chanted slogans “No rioters, only tyranny!” and “Liberate Hong Kong!” while politely approaching travellers with flyers describing their demands and explaining the unrest.

The airport is the world’s busiest air cargo port and the 8th busiest by passenger traffic, says the Airports Council International (ACI), a global association.

Demonstrators say they are fighting the erosion of the “one country, two systems” arrangement enshrining some autonomy for Hong Kong when China took it back from Britain in 1997.

They are demanding the resignation of the city’s leader, Carrie Lam, and an independent investigation into the handling of the protests.

Authorities have called the citywide demonstrations illegal and dangerous, while highlighting their impact on the already-faltering economy and residents’ daily lives.

China is also putting pressure on big companies, such as Cathay Pacific Airways, whose shares tumbled to close to a 10-year low on Monday, after it was told to suspend staff engaged in illegal protests.

BE WATER OR FACE WATER

Monday’s escalation came after police put the water cannon through its paces, showing it had enough strength to force dummy targets back at distances of 30 to 40 metres (33 to 44 yards), but drawing a rebuke from rights group Amnesty International.

“Water cannons are not a toy for the Hong Kong police to deploy as a sign of strength,” Man-kei Tam, the group’s Hong Kong director, said in a statement.

“These are powerful weapons that are inherently indiscriminate and have the potential of causing serious injury and even death.”

As police have dialled up their aggression, protesters have sought to channel a Bruce Lee maxim: “Be water,” employing a flash-mob strategy to frustrate authorities and stretch their resources.

5 things we learned from the Premier League’s opening weekend