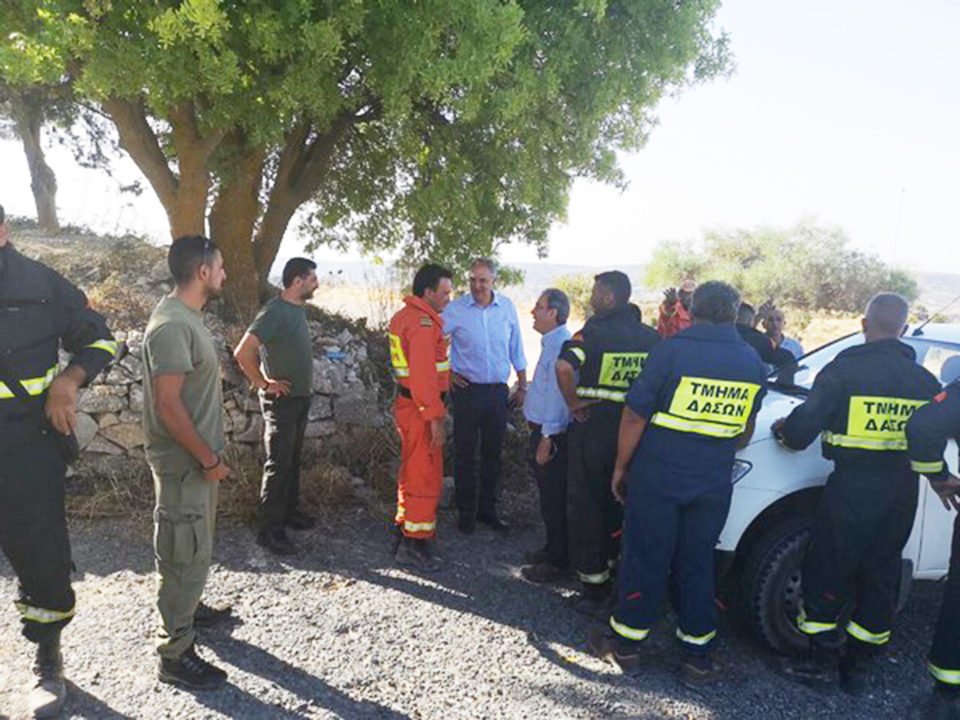 Agriculture Minister Costas Kadis on Tuesday announced that producers whose vineyards have been destroyed by the massive fire that burned around 2.2 square kilometres of vegetation in the wine producing villages of Limassol would be compensated.

The minister visited the area on Tuesday morning and was briefed by the Fire Department coordinator and the Director of the Forest Department on the progress of operations for extinguishing the fire while also meeting with the community leaders in the area.

The fire affected the area around the villages of Malia, Pachna, Ayios Amvrosios and Vouni, while neighbouring Kissousa, a small village of 10 residents, was evacuated as a precaution by police and the civil defence on Monday evening.

The minister informed the community leaders that the compensation measures provided for in the event of destruction of vineyards by fire would be implemented.

Within the coming period, officials from the Department of Agriculture will be in the area to record the damages and start the compensation procedures, the minister said.

The fire broke out at around noon Monday and was brought under control by Tuesday noon. It has so far burned over 2.2 sq kilometres of wild bush, pine trees, and various crops. The flames have also destroyed power pylons and cables.

According to community leader of Vouni Matheos Protopapas his village’s area was the one mostly affected albeit the fire did not threaten the inhabited area.

“The fire reached around four kilometres from the village, but a large expanse of land belonging to Vouni around the village has been burned,” Protopapas told the Cyprus Mail.

Some houses that are built outside the village had been threatened while the roof of a house that was under construction collapsed, he said.

The community leader said cultivated vineyards were not expansively damaged but the fire burned olive, apple and plum trees.

The village was left without electricity between Monday noon and around 1.30am on Tuesday.

Pachna too was left without electricity until around midnight. The blaze burned a number of vineyards and farm units that were outside the village.

The fire also threatened a chapel and cottages near Ayios Amvrosios village.

“It reached around two kilometres from the village,” said community leader of Ayios Amvrosios, Stelios Gregoriou, adding that it burned vineyards and orchards.

The area that was burned sits in the midst of the wine-producing area of Limassol which comprises around 20 villages. The area’s vineyards produce mainly the local varieties of Xynisteri (white) and Mavro (red) grapes, as well as some imported varieties but also around 20 other varieties including Cabernet Sauvignon, Mataro, Grenache and Syrah.