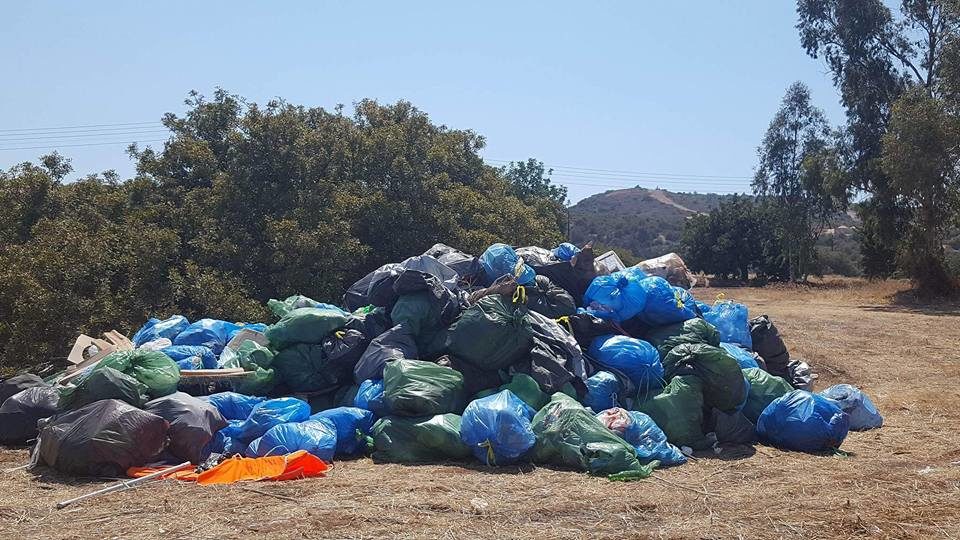 Rubbish left behind by campers

Illegal campers were given a deadline until Monday to pack up and leave an Akamas beach after complaints by the local authority that people are camping right up to the waterfront and hoarding the area for themselves.

Officials of the district office will be at the beach on Monday with instructions to seize all camping material still on the beach situated near the Baths of Aphrodite, the community leader of Neo Horio, Andreas Christodoulou, told the Cyprus Mail on Wednesday.

The outspoken community leader, under whose watch the beach falls, explained that some campers take over the 100-metre area with their tents for long periods of time, even when they are not actually staying there. Others reserve space on the beach for their friends. As a result, visitors who go there just for the day are inconvenienced, he said.

“They pitch their tents right where the waves break, and leave them there even when they are not in the area and come back a few days later or whenever they please,” Christodoulou said.

He added that some also barbecue daily and then bury the coal in the sand. The local community leaders also cited issues of hygiene as there are no toilets because it is not an organised, public beach.

“The beach does not belong to anyone, not the president or the local community. It belongs to everyone,” he said.

He added that he has asked permission to make the beach a proper public beach with facilities for bathers and lifeguards to tackle illegal camping in the area.

But it is not the only illegal camping site in that area, he said, referring to caravans illegally parked nearby. One person is even making a business out of it by renting some of his caravans to visitors, he said.

Christodoulou, who, for years has been calling against illegal camping in the area and inside the national park of Akamas proper said that “hopefully” next year, a legal camping site would be opened in the area near the Baths of Aphrodite.

He said that each year, his community council was faced with numerous problems during the summer holiday months, mainly July and August, due to the tonnes of rubbish campers leave behind but also irregularities carried out by some of the visitors.

This included illegal tree felling “for barbecues and to stock up for the winter”, makeshift showers and toilets that damage the area’s flora and noise pollution due to the myriad of quadbikes that visitors use to enter into the Akamas national park.

“They place plastic water tanks on carob trees, defecate on cyclamens. One of the caravan tenants even brought his own chickens just to have fresh eggs daily,” Christodoulou said.

He added that he needs help to deal with all sorts of irregularities observed daily during the summer.  The community council only has four workers who have their hands full, while the district police station is understaffed and cannot respond to every incident.

To make matters worse, community council workers have even been threatened.

On one occasion last year when one of the local official was sent to deal with a group of illegal campers he was threatened by one of them with a speargun.

“I need help from all competent carriers to tackle this situation,” he said.

He added that this year he has refused to send any staff or go himself to collect rubbish from within the Akamas national park as other years, citing safety hazards due to the dangerous narrow dirt road that leads into the park.

His decision followed the death last October of a Russian tourist couple whose rental car went went off the edge of the cliff while on that road and plunged around 30 metres below.

Christodoulou at the time had said that he had been calling for years that the entire stretch of road running from the Baths of Aphrodite to Fontana Amorosa and the edge of the Akamas – a length of around 7km – should be made safer as there have been several accidents.

Our View: The farce of politicians’ asset statements must stop