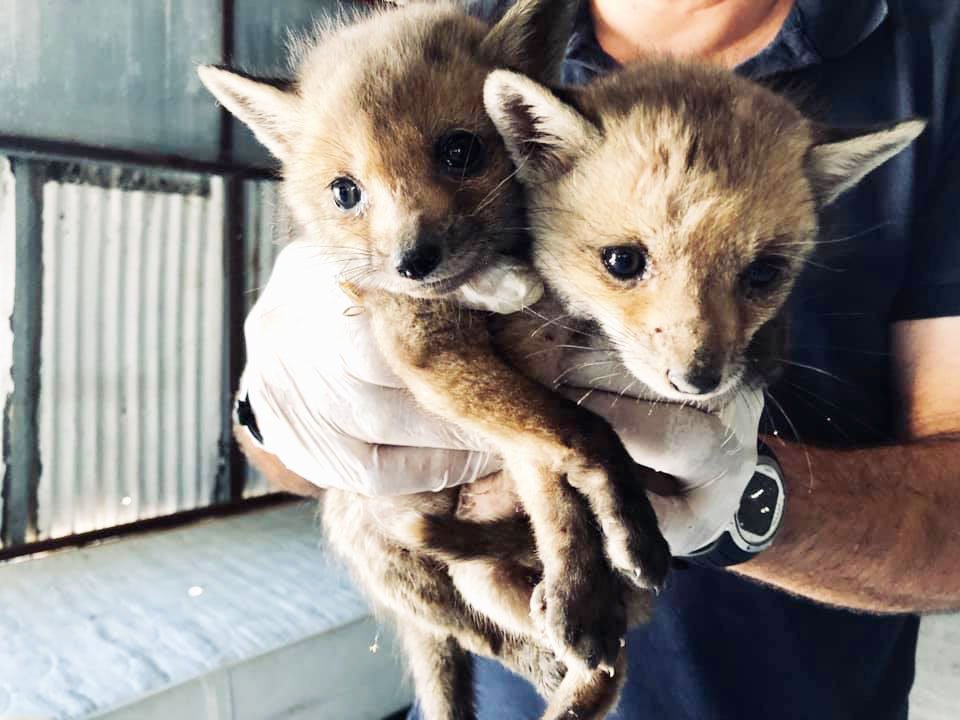 Rea and Romulus shortly after they were found lying beside their dead, poisoned mother

The Animal Party has welcomed an announcement by the agriculture ministry that debunks five myths about foxes, arguing that they must not be demonised and threatened as they are an important part of the ecosystem.

The party’s announcement came after officials of the ministry released into the wild two young foxes, Rea and Romulus, who were found in the Famagusta district last May next to their dead mother who had eaten food laced with poison.

The two baby foxes had been taken in by the forestry department and were taken care of until last week when they were released into the wild.

After their release, and following criticism that foxes do more harm than good, the ministry was quick to put the record straight.

It said that despite the public image of foxes as cunning and evil, they in fact belong to the same Canidae family as dogs.

“They are highly intelligent animals and raise their little ones with adaptability, love and care. Unlike dogs and wolves, the fox is a monogamous animal that stays with the same partner for the rest of its life, with both parents taking equal care of their young,” the ministry said.

It also said that it was a myth that foxes kill more animals than they need for food.

That would be a waste of energy and against the laws of nature, the ministry said, adding that foxes, if presented the opportunity, might kill more animals that they need to eat immediately, but will bury them so that it has food later on.

“This is a survival tactic applied by other carnivores,” it said.

It is for this reason, the ministry said, that farm animals such as chickens and rabbits must be kept in facilities which foxes cannot access.

It also turned down the myth that foxes can attack humans or that they are carriers of rabies.

“There has not been a rabies incident in Cyprus since the 1930s,” it said.

Foxes will usually run away when they are approached by humans, but they might show signs of aggression if they are threatened, just like dogs.

In response to the argument by hunters that foxes mostly feed on game such as hare and partridge, the ministry said foxes are an omnivorous mammal that feed mainly on rodents, insects, fruits, dead animals, but also other small mammals and birds.

“Foxes will not waste energy to hunt animals that are difficult to catch, but will suffice in easy prey and where there is plenty of food.”

Naturally, it said, foxes will attack partridges bred in captivity after they have been released if they have not developed the instincts of the wild, as they are an easy prey.

The agriculture ministry also debunked the myth that foxes are not part of the local ecosystem because they were introduced to the island by the British to hunt as sport.

“The truth is that foxes have been in Cyprus for many thousands of years. The remains of foxes have been found in Neolithic settlements in several areas of Cyprus, proving that the species has a long history on the island and certainly over 10,000 years!” the ministry said.

The Animal Party said it fully supported the agriculture ministry’s efforts to dissipate false stereotypes about foxes that encourage poisoning or shooting them.

It also called on the government to provide substantive solutions “for the proper management and protection of foxes.”

Foxes are an important species of Cyprus’ fauna and a misunderstood one and their victimisation ought to stop, the party said.

Hunters and farmers have been pushing for measures to decrease the fox population arguing that the increase of their numbers was threatening the balance of fauna and game.

Authorities in the past had investigated cases of brutal killing of foxes.