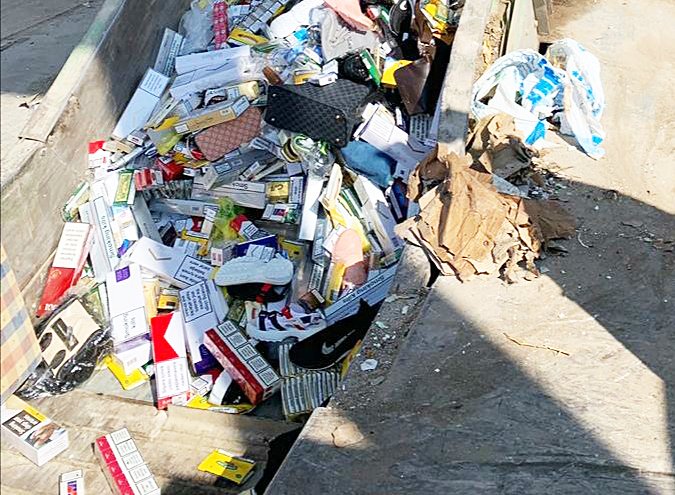 Sovereign Base Area Customs officials have this week revealed that seizures of cigarettes and hand-rolling tobacco (HRT) are up at its two crossing points of Pergamos and Black Knight when compared to the same period last year.

The latest statistics show that cigarette seizures have increased by 103 per cent and HRT has jumped even more by a figure of 225 per cent.

Adam Chatfield, the Head of SBA Customs in Dhekelia, says this is good news for his officers and that it highlights the outstanding work they are doing 24 hours a day, 365 days of the year, to ensure security at the crossing points is maintained.

He said: “This is the time of year when we are especially busy because we are dealing with a lot of tourists crossing over. Pergamos in particular is very busy but we are still maintaining a 100 per cent vehicle check when cars reach the crossing points.”

However, despite those high-profile vehicle checks, it still hasn’t stopped an increasing number of people attempting to bring goods back over from the Turkish Controlled Areas (TCAs) into the SBAs and Republic of Cyprus.

And according to the Dhekelia Customs chief, the answer, perhaps not surprisingly, is very simple. “The increase in the number of people trying to illegally bring items over the crossing points, we believe, is down to the devaluation of the Turkish lira, because it means items in the TCAs are much cheaper and people can save an awful lot of money by bringing it over,” he said.

But despite the best efforts of those attempting to save some euros by bringing goods through the SBA crossing points, Chatfield said his officers were well-trained to detect any attempts when they stop cars.

In explaining the process, he said: “I have already mentioned that we check 100 per cent of vehicles that cross over at both Pergamos and Black Knight, near Ayios Nikolaos.

“Every vehicle is subjected to a minimum of an identification check and a visual search, which will mean our officers will look the car over, check in the boot to ensure that there are no people hiding, or that there are any unusual amounts of items stored inside the vehicle.

“That is the minimum check that we do every time but we can also conduct a more thorough search if our officers feel it is warranted.”
And in the past, these checks have proven to be highly rewarding. “People do try to bring all sorts of things over,” he said. “But the most common items are cigarettes and HRT. However, we have also seized things like counterfeit goods in the past because there is quite a large trade for that going on too.”

The success of SBA Customs, which has 42 operational staff working in the ESBA – an even 50-50 split between Greek and Turkish Cypriots – has been unheralded in the past, with much of what they do being seen as ‘run-of-the-mill’ customs work.

But with seizures up and joint patrols alongside their SBA Police colleagues happening along the Green Line to combat illegal entry regularly, their efforts certainly deserve highlighting.

“We do work closely with the SBA Police to ensure that people are not gaining entry to the SBAs and subsequently, the Republic of Cyprus illegally and that work is carried out along the Green Line because they realise that if they try coming over at the crossing points, cars will be checked and they will be caught.

“We have had many successful operations and last Christmas some facilitators were successfully prosecuted in the SBA Court and that would not have been possible without the excellent working relationships we have with the SBA Police and other units across BFC and further afield.”