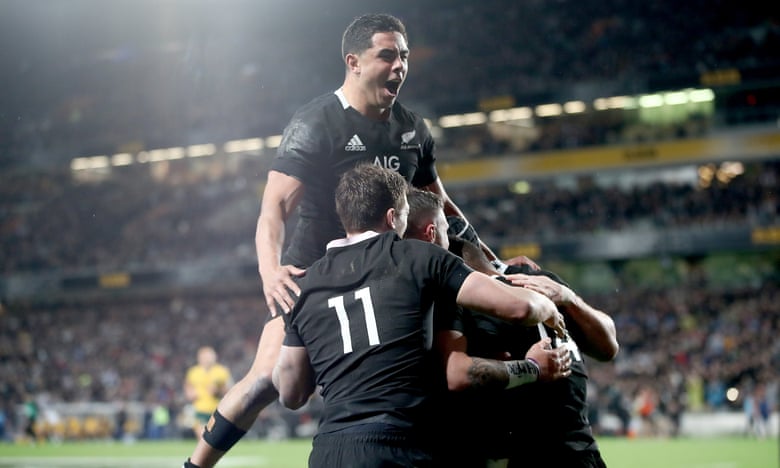 The All Blacks silenced their critics with a physical and polished performance to retain the Bledisloe Cup with a 36-0 victory over Australia that also quelled concerns the wheels might be coming off their World Cup title defence.

Flyhalf Richie Mo’unga scored a try and slotted nine points with the boot at Eden Park before he went off with a shoulder injury that could cause some concerns for coach Steve Hansen’sWorld Cup plans.

Aaron Smith, Sonny Bill Williams, Sevu Reece and George Bridge also crossed for the All Blacks, who were humbled 47-26 last week in Perth.

That defeat created consternation in New Zealand, with debate over Hansen’s tactics, selections and combinations and whether the side may actually be on the downward slide just five weeks out from the World Cup.

The All Blacks responded to keep the Wallabies scoreless for the eighth time in tests between the two sides en route to retaining the title for a 17th season.

They were far more clinical and confrontational in contact and dominated the scrum, shunting the Wallabies back throughout the match, including twice when they were reduced to seven men with hooker Dane Coles in the sinbin for a dangerous tackle.

“Really proud of the boys,” Hansen said after his 100th game in charge. “It just goes to show what a bit of attitude with a bit of talent does. It’s a long time seven days in sport, so very proud of them.

“We walk away from this game very satisfied with the (lessons) we have taken from it and the (Bledisloe) Cup.

The Wallabies had held high hopes they might be able to snatch back the Bledisloe Cup for the first time since 2002 despite recent history being firmly against the visitors.

Australia had not beaten the All Blacks in New Zealand since 2001 — a run of 22 losses — and were winless in Bledisloe tests at Eden Park for the last 33 years.

They also invariably faced a backlash from the All Blacks smarting from a record loss.

History repeated itself and many in the sold-out crowd would have been aware that by performing the Kapa O Pango haka, which they do only for big matches, the All Blacks were ready to right the wrongs of the Perth loss.

An early penalty to Mo’unga was all they had to show for the first 30 minutes before the All Blacks struck with two quick counter-attacking tries to the flyhalf and Smith.

Poor discipline had blighted the All Blacks last week in Perth and again for about 20 minutes at Eden Park, while Coles battled with unrestrained rage for about five minutes.

The hooker had already been warned for getting involved in a confrontation with lock Adam Coleman, before he produced a dangerous throw on scrumhalf Nic White in the 37th minute.

Referee Jaco Peyper not only gave him a yellow card but overturned a penalty advantage while the All Blacks were attacking the Wallabies line.

Coles’ absence was not exploited by the Wallabies.

With captain Kieran Read, lock Patrick Tuipulotu, playing arguably his best game for the national side, and the front row dominant they were able to hector the Wallabies scrum twice with just seven men either side of the break.

Williams scored just after halftime following one of those scrums that earned a penalty before Reece and Bridge highlighted why Hansen had brought them into the side with a try each in the final 15 minutes.

“They dominated for all but a few minutes of that game in all areas,” Wallabies captain Michael Hooper said.

“We threw everything we had at them for the whole game but probably let it get too far away in the end.”

‘You can still sense the love’: Baby boomers revel at Woodstock 50 years on