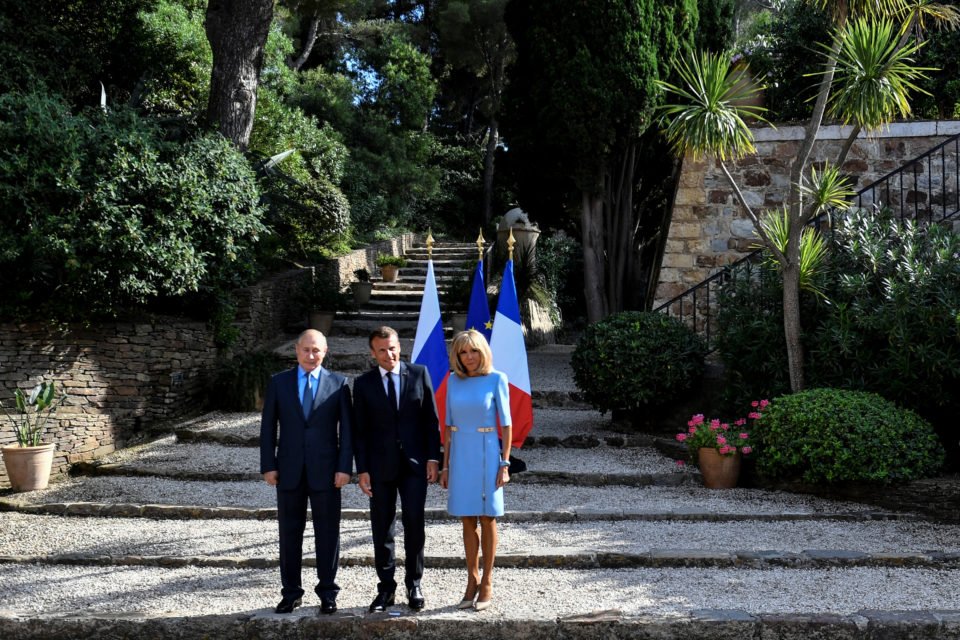 French President Emmanuel Macron and his wife Brigitte Macron pose with Russia's President Vladimir Putin, at the French President's summer retreat of the Bregancon fortress on the Mediterranean coast,

By Clotaire Achi and John Irish

Vladimir Putin rebuked his French counterpart on Monday, saying he did not want “yellow vest” protests spring up like in France, after Emmanuel Macron urged the Russian leader to abide by democratic principles following weeks of protests in Moscow.

Macron, who was meeting Putin at his summer residence in southern France five days before hosting summit of G7 rich nations, is keen to show Moscow it is not ostracised despite being kicked out of the G7 after its annexation of Crimea from Ukraine in 2014.

Despite the talks focusing on international crises, Macron sought to tackle Putin on the internal Russian situation. Moscow has been rocked by weekly protests for more than a month after the authorities barred opposition candidates from running in an election for the city’s legislature in September.

“We called this summer for freedom of protest, freedom of speech, freedom of opinion and the freedom to run in elections, which should be fully respected in Russia like for any member of the Council of Europe,” Macron told a joint news conference ahead of their meeting.

While initially, Putin ignored the comment, he was quick to retort after a follow-up question on the Moscow protests saying things were being handled in line with the law, but that he didn’t want the situation to develop like in France.

“We all know about the events linked to the so-called yellow vests during which, according to our calculations, 11 people were killed and 2,500 injured,” Putin said.

“We wouldn’t want such events to take place in the Russian capital and will do all we can to ensure our domestic political situation evolved strictly in the framework of the law.”

The yellow vest protests, named after motorists’ high-visibility jackets, began in November over fuel tax increases but evolved into a sometimes violent revolt against politicians and a government seen as out of touch.

Macron said the comparison with France was inaccurate, since at least yellow vest protesters could stand in elections.

“Those we call the yellow vests were able to run freely in European elections, will run in municipal elections, and that’s very well like that,” he said.

Since he took office in 2017, Macron has sought to display firmness to Putin while at the same time encouraging Moscow into a less confrontational stance on international issues by trying to “anchor” it to Europe.

The two men said they would discuss a raft of international crises including Iran, Syria and arms control issues. However, it is on Ukraine where Paris hopes to see progress after its new president offered an olive branch to Putin.

Macron said he hoped to be able to convince Putin to agree to a so-called ‘Normandy Format’ summit involving France, Germany, Ukraine and Russia. Its leaders have not met together since October 2016.

Putin said he saw no alternative to “Normandy” format heads of state talks on the Ukraine crisis, but stopped short on Monday of signing up to a new summit on the subject.

He said phone conversations with Ukrainian President Volodymr Zelenskiy had given him cautious grounds for optimism, but stressed that he believed that any meeting aimed at resolving the Ukraine crisis should yield tangible results. (Additional reporting by Michel Rose in Paris and Polina Devitt and Andrew Osborn in Moscow; Writing by John Irish; editing by Richard Lough, William Maclean)