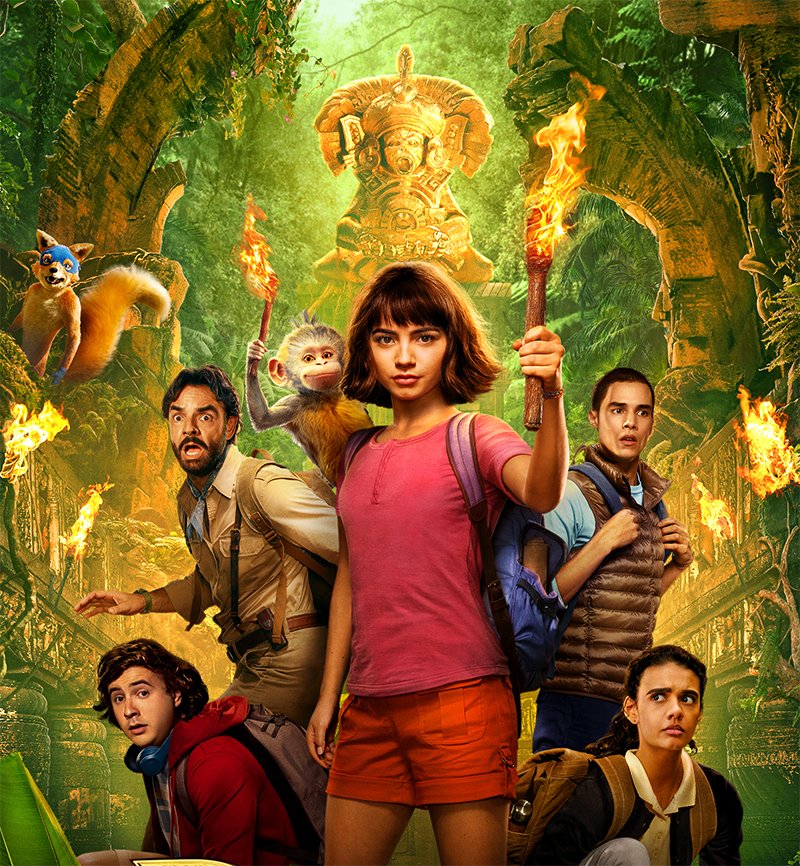 Dora (Isabela Moner) is Pollyanna-ish, and perky to a fault. She wears her hair in bangs, and turns everything into a song. When she arrives in the city (from the jungle, where she’s lived her whole life) she tries to make friends with all the other passengers, going up to strangers with a bouncy ‘I’m Dora!’. Later, in the school cafeteria, she’s so impressed with the macaroni cheese that she personally congratulates every member of the bewildered kitchen staff. Admittedly she’s led a sheltered life, but still – is she for real? She acts more like a six-year-old than a 16-year-old.

Maybe that’s the point. We may (or may not!) be nostalgic for our teenage years – but teenagers too are nostalgic, for the carefree world of childhood before the minefield of high school (“This is high school,” says Dora’s cousin Diego, warning her to cut out the bubbliness: “It’s life or death”). Dora the Explorer was a TV cartoon show aimed at prepubescents but Dora and the Lost City of Gold shifts the character to an older demographic, probably middle-school or early high-school. The youngsters in the movie – including Diego, prim know-it-all Sammy and nerdy Randy – are in their late teens (the actors playing them, Ms Moner excepted, are in their 20s) and roll their eyes at Dora’s naivety, but it comes in handy when they find themselves in the jungle, where it really is life or death. You might say the teens regress to happy, unselfconscious childhood – and we regress too, charmed by the film’s wide-eyed exuberance.

This is Nickelodeon, not Disney, and it makes a difference; the messages are similar, but the touch is lighter. Dora is indeed a ‘strong woman’, an intrepid explorer unfazed by anything from quicksand to crocodiles (“Awww, babies!” she coos, patting the little snapping pups by the side of a fierce jungle caiman) – but she’s such a goofball, one never feels the cold hand of political correctness. Colonialism, and the Elgin-esque practice of looting ancient sites, gets a brief, disapproving mention when Dora and Co go looking for Parapata, the lost Inca city of gold – actually they’re looking for her parents; shady ally Alejandro (Eugenio Derbez) is the one with his eye on the gold – but, again, it’s not over-emphasised, even when ancient Incas appear (Q’orianka Kilcher, Pocahontas in The New World, plays the Inca queen) to protect their heritage.

This is still a slick Hollywood kids’ movie, and it does outstay its welcome; Dora herself is deliberately one-note, while adult sidekick Derbez is firmly in panto mode. Yet there’s so much to giggle at here, from a field of giant flowers whose hallucinogenic properties briefly turn Dora and friends into their cartoon progenitors (her talking backpack also appears), to the great Michael Pena as Dora’s explorer dad, warning his daughter that she might get invited to parties in the big city – some of these parties are called “raves”, he explains gravely; the people who go to these parties are called “ravers” – then doing an imitation of a thumping 90s beat as an illustration of the kind of music she should be looking out for. It’s silly, but funny.

Dora and the Lost City of Gold is silly-but-funny in general. It dares to be dismissed as lame and babyish (cool teens will probably snub it), which is why it’s cute and refreshing. The jokes are indeed rather lame, and worse – an entire gag revolves around Sammy’s desperate need to go number-two in the jungle – yet this may be a film, paradoxically, that receptive adults will enjoy just as much as kids; there’s something almost inspirational about Dora, this relentlessly chirpy, optimistic girl who powers through life armed only with the credo that everyone is good “deep down inside”, blithely unconcerned with Syria or Trump or climate change. On the spectrum of 16-year-old girls, she’s like the anti-Greta Thunberg.

None of that is deliberate, of course, nor does it really make sense to saddle a kidpic with adult concerns – but every film strikes a chord, and the jaunty, unpretentious Dora is a tonic in humourless times. Note, after all, that the film contains a thieving fox named Swiper – and it opens with a stern admonition from the ‘Fox Council of the Americas’, making clear that foxes are honest, hard-working animals and a fox swiping stuff is nothing but a “hurtful stereotype”. It’s a gag, of course, but a realistic one – and who can doubt that foxes, too, will soon be taking part in offence culture, in this day and age? It’s a jungle out there.

Perdikis branded ‘populist of the century’

Ennio Morricone’s clever scoring in A Fistful of Dollars