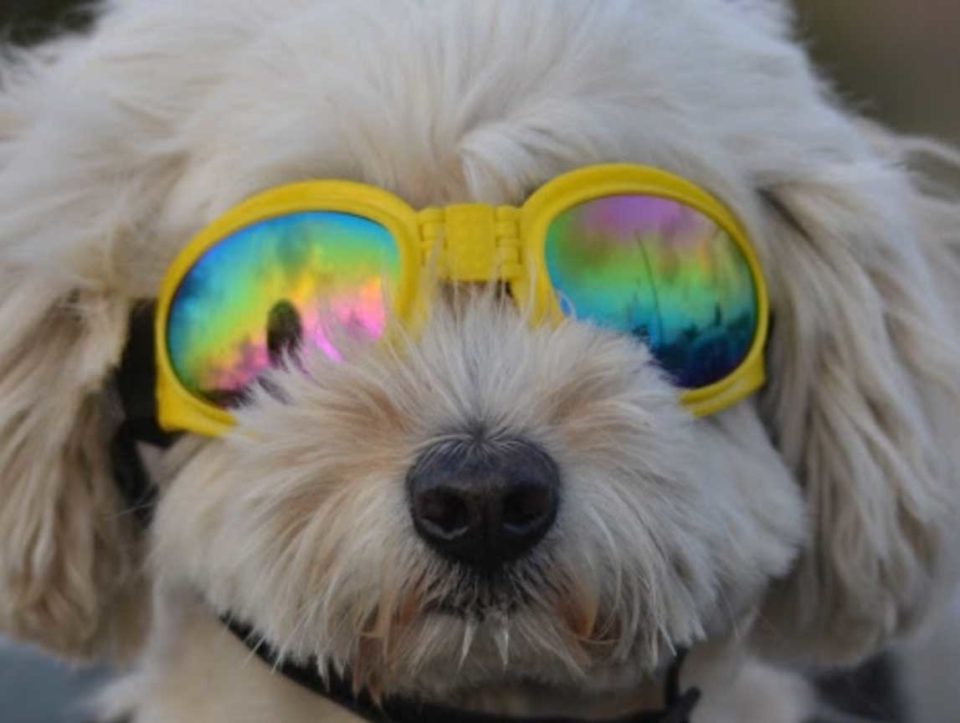 Rosie with her specially made doggy goggles

Given a home by Steve Ingleby five years ago after she was found wandering the streets of Kissonerga alone and starving, Rosie the Cyprus poodle has thrived under the care of Steve and his wife Janet.

And as her confidence has grown so has her taste for adventure.

“Around the time I got Rosie I also got a quad bike and for a bit of fun I lifted her on to it,” said Steve. “She was unsure at first, which you’d expect, but now she stands on her back paws waiting to be lifted up into her seat. She loves going for rides.”

Rosie’s favourite road trip is to the Akamas peninsula and she goes there daily, sitting in a small cushioned crate, set on the front of Steve’s quad bike, wearing specially made dog goggles bought from the UK.

‘When Rosie and I hit the road, we haven’t a care in the world,” said Steve, aged 68. “The Akamas is a fantastic place for Rosie to run about in safely. In fact, sometimes I wonder if she thinks she owns the area. Over the years she’s grown quite a following there.

“The quad biking community know us well here and they beep and give us the thumbs up as we pass. Sometimes taxi drivers speed up to overtake just to allow their customers to take photos with their cameras.

“I love it when people stop and chat and take photos with Rosie. She brings joy wherever she goes. We’ve even been invited to a couple of Russian weddings. The photographers like to take photos of the bride in the sea holding Rosie in her arms. Rosie enjoys the attention, though I have to say, she’s not that keen on water.”

Five years ago, life could have been very different for Rosie if one of Steve’s friends hadn’t taken pity on her as she struggled to survive as a stray.

Steve and Janet had not long arrived in Cyprus, after selling their UK business to enjoy early retirement in the sun, and when they were asked to temporarily foster Rosie they were more than happy to do so. After a couple of days, however, it was clear that Rosie would be going nowhere. She was one of the lucky ones.

Thousands of dogs, including newborns and puppies, are annually abandoned in Cyprus, according to animal welfare groups. In line with government policy, dogs that are reported, found and captured are often euthanised after 15 days.

While there has been a raft of new measures in recent years to deal with the crisis – including free microchipping – animal welfare groups would like to see greater penalties for animal abuse and more people step forward to offer loving homes to dogs like Rosie.

“We feel a real sense of joy when we manage to match the right dog with the right owner. Dogs are such loyal and loving companions it’s heart breaking to see them live their lives without that kind of affection,” said Nieske De Jonge, founder of the Stray Haven dog shelter in Giolou, near Polis.  “We do everything we can to make their existence better at Stray Haven – we can feed them and provide them with a safe place and the medical care they need and a cuddle – but nothing beats being in a loving home.”

Something which Steve whole-heartedly agrees with.

“When they found Rosie, her coat was mangy and she was covered in fleas and ticks. Giving her a home was one of the best things we did. Rosie is such a loving dog and she’s also very good company.”