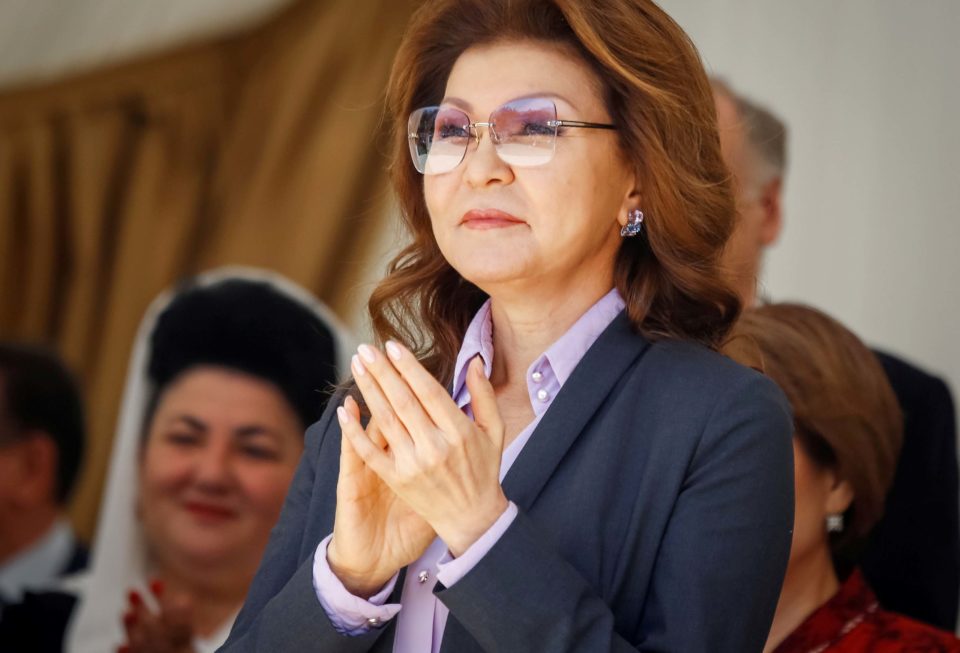 An ageing central Asian leader grooms his daughter to succeed him, and she then overcomes suspicion from her patriarchal society to unite her people.

It could describe the future trajectory of Dariga Nazarbayeva, the 56-year-old daughter of Kazakhstan’s former leader Nursultan Nazarbayev, who many people believe will eventually become president of the oil-producing nation.

In fact, it’s the plot of a film about Tomyris, an ancient central Asian warrior queen, which is being prepared for release in Kazakhstan and whose producer and co-writer is Dariga Nazarbayeva’s younger sister, Aliya.

The film’s tagline, according to advance publicity material, is: ‘A queen born to make the steppe great.’

The filmmakers declined to answer questions from Reuters, but according to Kazakh political analyst Dosym Satpayev, the parallels between the hero of the movie and Dariga may be more than just a coincidence.

“One cannot rule out the idea that Tomyris serves several goals: to play a political role… on the one hand, and on the other to help the (first) president’s youngest daughter fulfil her movie industry ambitions,” said Satpayev.

But some political observers believe Tokayev is a place-holder and that the succession will eventually pass to a member of the Nazarbayev family.

When her father stepped down, Dariga was appointed the new speaker of the Senate, making her the no.2 figure in the political hierarchy of Kazakhstan, an ex-Soviet republic of 18 million people which won its independence from Moscow in 1991.

Still, the idea of a female ruler could be a hard sell in a country where many still believe a woman’s role is in the home.

This is why the upcoming movie has caught the eye of some observers who think it might make Nazarbayeva’s potential presidential bid more acceptable among ordinary Kazakhs.

Directed by Akan Satayev, who has previously worked on a flattering biopic of Nursultan Nazarbayev, the movie is entitled Tomyris and is based on the story of the ancient queen.

She was ruler of the Massageteans, a confederation of Iranian-speaking nomadic tribes who were related to Scythians and inhabited Central Asia for several centuries.

Ancient Greek historian Herodotus described their victory over the invading Persian army in the sixth century BC, and how Tomyris dipped the head of King Cyrus the Great, killed in battle, in a vessel of blood.

Little else is known about Tomyris, but the void has been filled by fiction.

Kazakh writer Bulat Zhandarbekov published a novel of the same name in 1993 and it became an instant hit as the newly-independent nation was looking for a fresh identity.

Director Satayev declined an interview request from Reuters, but four people involved in its production confirmed that the script was loosely based on the book.

The novel describes Tomyris’ father uniting the Massagetean tribes while grooming her, his only child, as his heir, while also chronicling the rise of the Persian empire to the southwest.

After her father’s death, Tomyris skilfully plays her own political game in order to maintain control over ambitious and scheming tribe leaders as Massageteans fight war after war with neighbouring tribes and the kingdom of Khwarazm.

Portrayed as a strong, cunning but merciful leader, Tomyris creates a thousands-strong all-female military unit which helps tip the scales in the final battle against Cyrus.

The novel was so successful that Tomyris remains a popular name for newborn girls in Kazakhstan.

Man jailed for the illegal possession of arms